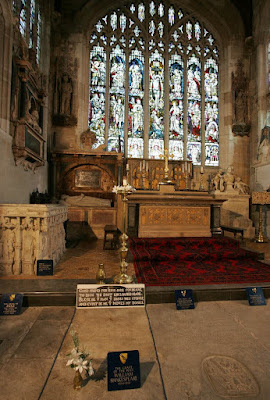 'It's a bit black over Bill's mother's' is a very old Birmingham saying indeed, and it means that storm clouds are forming to the South East of the city, over Stratford-upon-Avon. The 'Bill' in the saying is of course William Shakespeare and I think I am the only TV blogger who can blog about this documentary and add such local colour.
Apart from my own bizarre attitude this documentary is a masterpiece of historical documentary making, about what on earth is going on with Shakespeare's tomb in Stratford parish church, because it's nowhere near big enough to contain a body.
The investigation is absolutely fascinating as an example of televisual dramatic documentary making. It starts off with the vicar refusing to let them just randomly dig up the grave (because of course he did, they'd need to go back with a court order, and this is largely for dramatic effect), saying that the famous curse on the tomb is indication enough that Shakespeare wouldn't have wanted to be dug up.
It moves on to a ground penetrating radar scan of the tomb which reveals the fact that the body in Shakespeare's grave doesn't seem to have a head and the ground appears to have been disturbed. This naturally enough sets them off on investigating the rumour that his head was stolen from his grave in 1794 and solving further questions about the tomb raised by what was found in the GPR.
The results lead onto an unsuccesful hunt for the head and a theory of why the grave looks the way it does.
So far, so scientific and blokey, but this documentary also uses other sources such as Shakespeare's will to suggest his likely mental state at the time of his death, as well as other general history about death and burial customs and social history of Shakespeare's time and afterwards. An example would be a discursion into a craze for celebrity skull stealing in the eighteenth century. While it is all factual it is all presented in a rather dramatic way which stops the show becoming boring.
I have no criticism of this documentary.
The science in the show was done by the University of Staffordshire and you can read their summary of their findings here (which saves me from having to say it).
I would recommend this documentary very highly as not containing any pseudohistory or fiction at all, and being comepletely factual, which still managing to maintain interest and not be drily academic.
This blog is mirrored at culttvblog.blogspot.com and culttvblog.substack.com (where you can still subscribe by email if you want). If you want to support me and this blog, you can buy me a coffee or a box set at ko-fi.com/culttvblog. wesayenough.co.uk - electoralcommission.org.uk - tactical.vote - tacticalvote.co.uk - rejoinandreform.co.uk - makevotesmatter.co.uk
2010s TV Documentary