Documentary Season: Heart of the Angel 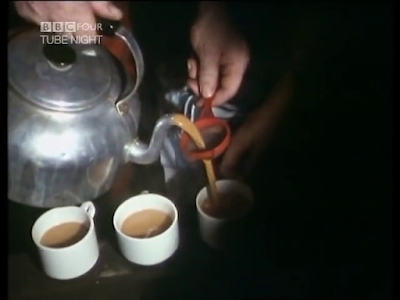 Heart of the Angel is a delightful BBC documentary from 1989 about The Angel underground station in Islington. This is another of those occasions when I'm going to say don't bother to read what I have to say, just go and watch it.

Doesn't mean I'm not going to go into ecstasies of praise about it though.

Thre are two techniques used in this documentary, straightforward interviews with the staff and customers, and the always reliable documentary technique of just turning on the camera and recording what happens.

The interviews are less successful in my opinion, and obviously can feel a little contrived. It's the scenes of the normal activity of the station which are most successful, and they are WILD. The staff are wildly eccentric, obviously at the end of their tether on a daily basis and start behaving in ways which, as a former psych nurse, I recognise as some of the institutional ways of coping. We have the lift attendant with his strange philosophical questions for his literally captive audience, we have the man telling two foreign visitors to change to the Pickerly-Dickerly line (which anyone British would know what he means but they wouldn't) and we have a wonderful bit where disgruntled customers demand who's in charge and the man at the barrier is delighted to point at the boss and goes 'He is'.

There is a further documentary technique which is used very cleverly, which is to link together many scenes in a montage linked around the station lifts. We see the staff being frustrated because the lifts aren't working, we see the eccentric lift attendant asking people if the world is flat, we see the public having to climb up huge numbers of those very characteristic stairs used in the Underground, we see the public complaining because they've had to do this. It is a montage of frustration and misery, crowned by one of the staff expressing an opinion that the lifts look so beaten up because they were not intended to get the heavy use they get in an underground station.

We get to meet the unfortunately-named fluffers who clean up the hair and fluff which gathers in the tunnels because it's a fire hazard and the crews who do work on the lines by night. This is obviously very hgard physical labour and you can see how it wears them down. We see that strange phenomenon of night work, that people start singing hymns to themselves and thinking they're seeing and hearing things. It's a doubly strange world working both at night and underground.

I don't think it is explicitly said but it feels as if the station is being run down and as little as possible spent on maintenance because it was planned to rebuild the station completely a few years later. This to me would be the scenes of complete neglect you see, although anecdotal reports of the whole of the Underground say that ongoing neglect is a real problem.

To my horror I have realised that this was made 34 years ago and you really notice the London accents. There are interesting contrasts of all sorts of people, including one lady with a frightfully far back accent berating the man at the ticket barrier. There are hints of the Multicultural London English which has arrived since but not a hint of Estuary English and it's a striking memorial of its time.

My absolutely fanourite bit is the scene when they talk to the maintenance gang at night during a pause for tea, which is made in a huge aluminium teapot USING TEALEAVES. There am certain standards what need upholding.

If you've lasted through my witterings you might as well spend the forty minutes needed to see the show, you won't regret it.