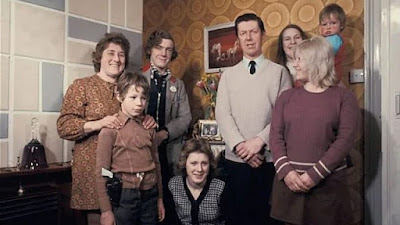 The Family (not to be confused with the several other TV shows with the same name) was a 1974 BBC series of twelve episodes about a real extended family in Reading. It was a major turning point in 'reality' TV (in the UK - there was a previous similar series called An American Family broadcast in 1973) because it gave the viewer real access to the Wilkins family, their daily lives and conflicts. The show is online in two versions, a shorter summary of the whole series, and all the epiosdes are currently available online. I would recommend seeing all the episodes for the full effect.

At the time it was incredibly powerful, attracting much interest (at one point HUGE crowds which the police couldn't control turned up for the wedding of two of the characters and fought over the bouquet) and criticism (1970s Britain wasn't ready for the rather unvarnished portrait of teenage pregnancy, affairs and children with different fathers it portrayed). It was also rather unusual in that the episodes were broadcast as they were made and so the characters and others commented on the impact of the show as it was actually being made.

I know I'm tending to focus on techniques in this series of posts, but this technique of broadcasting as the episodes were made was really striking. I can't think of another show where you see the characters actually commenting on the press's comments on previous episodes as they go on, and their ongoing relationship with other media being dictated by this response. If papers had been mean to them previously they didn't get an interview for the wedding, type thing. In perhaps the greatest compliment a show could get we hear mentioned at one point that Mary Whitehouse was trying to get the show cancelled (always a good sign) and the family comment on how people watching it are adults and it's nothing to do with her. And of course they're right - the reality is the things in this family which offended the prurient, such as the daughter in law already being pregnant when she married the son at sixteen, had already happened without the influence of this show. So since people do get pregnant young and unmarried, why the hell would you protext about shows showing that? Do people really rush off and do what they see on TV? I actually think this show would put you off because it does actually show how difficult life is for these young people.

It's fascinating as a portrait of a family. We see their attitudes, particularly an attitude about the wife wanting to be 'dominated' by the husband (while talking about how to train the husband to dominate his wife, which is probably letting too many wifely secrets out of the bag on TV). I suppose the trick is that it shows A family rather than the viewer's family, so that you don't have to live with them and their opinions, you get to see into a family different from your own. As escapist television you might wish your family was like them or aspire to be like them, or possibly be glad that your own family isn't like them. In fact the way this show shows the inner workings of a family, of the sort that you don't normally see, is a stroke of genius. It spends quite a lot of time on daughter Marian and her boyfriend Tom's ongoing arguments about getting married, with contributions from the mother. If I have a criticism it is that it spends a LOT of time on the circular arguments about whether and when to get married, especially as it's blatantly apparent that if you can't even compromise on that your marriage is doomed (yes, they got divorced).

My only other criticism is that reports are that things are rather contrived: for example the family have said that a scene in which it looks as if the nine year old son is being told he was conceived in an affair was nothing of the sort. So perhaps this series functions as a warning of the effect of the media. In fact the family still attract attention as a result of this show.

My absolutely favourite things of the series is the selection of magnificent 1970s wallpapers, which unfortunately the prints I've found on YouTube are too blurry to show very well, and the fact that the Wilkinsons' bath is, in old school style, in the kitchen.