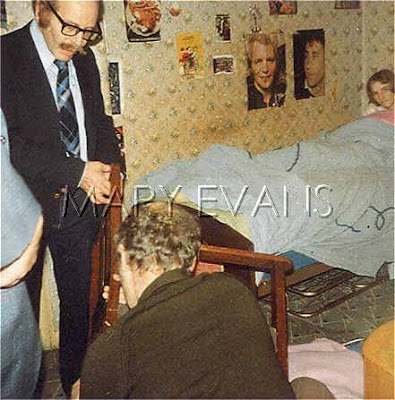 This blog post is actually about two separate documentaries about the events in Enfield reported as 'the Enfield poltergeist' in the late 1970s. It really winds up my INFJ/librarian brain that I have been entirely unable to date the first one here, which since it doesn't even have titles on the version on YouTube may not even be a whole programme. At the beginning it has an overlay saying BBC however there is no footage apparently later than the seventies so I am assuming it is a contemporary broadcast from the late seventies and the version on YouTube is a recording of a later broadcast, because UK TV didn't overlay the channel over the show in the 1970s. I know, because I was there and if they had I would have wound up my mother by trying to rub it off the screen. The other one is a Channel 4 documentary from 2007 called Interview with a Poltergeist here.

For simplicity I will refer to them as the BBC documentary and the Channel 4 documentary respectively. Truth to tell the story has been extensively chewed over in fictional terms recently: the second of The Conjuring films is based on this story and there has also been a fictional TV series which I have written about here. Therefore to try to be brief: the story is of a single mother with three children in north London who in 1977 quite suddenly reported all the classic phenomena of a 'poltergeist', or noisy ghost haunting - things being thrown, tappings, things being moved round, and later a strange voice. All of these centred around the middle child, an 11 year old girl called Janet.

The 1970s BBC documentary is a work of pure classic journalism - in fact it's quite refreshing to be reminded what pure journalism looks like. It simply repeats the reports including interviews with the various participants and witnesses, and then asks questions without attempting to answer them. Extensive contemporary reporting survives without this show but it is nonetheless fascinating because you get to see the various people involved as they were at the time the events were happening.

My first criticism of it would be that it uses some of the recordings of the events made by the investigator from the Society for Psychical Research, Maurice Grosse, and juxtaposes them with some re-enactment in the actual house, and it could be mistaken for actual footage because it cuts too suddenly from interviews to re-enactment. But my main criticism, which is passed over almost without note is that Janet actually says in her interview that the house isn't haunted and her elder sister tells her to shut up.

How is it possible to do a documentary of any quality, have the main focus of the events say that they are not caused supernaturally and be very obviously shushed by her sister and not pick this up? Right in the middle of this documentary we have what looks very much like an admission that the girls were producing the phenomena and this wasn't explored further!

However what this documentary may do for readers of this blog is provide an incredible trip back to the seventies. You should see the posters in the girls' bedroom - all of them stars who will be familiar to the readers of this blog, people like Starsky and Hutch, Purdey, you name it. In the Hodgson family's house where the haunting took place, it is apparent that they were poorer so the decorations aren't in the latest fashion, but in the scenes where they interview the neighbours, we get a magnificent vista of mismatched 1970s wallpapers (including one in a wonderful shade of orange)and the house even has a bar. In the 2007 one we get to see footage of an interview with the police officers who went to the house when Mrs Hodgson originally called them and you have to love the bloke's magnificent luxurious sideburns! None of this is to detract from the real star of the show which is Maurice Grosse's moustache.

The Channel 4 documentary is quite a different kettle of fish and has the advantage of the passage of thirty years since it started. We get to see interviews with the participants and their reflections after the passage of time.

But the advantage the show has is that they have a professional parapsychologist on board who describes how everything that is said does not amount to scientific evidence and explain the psychological tricks people play on themselves and how people can think they've seen things. There are light years of difference between the two shows. In the BBC documentary the only real questioning is the questioning Maurice Grosse does in his own head before concluded that the events are not of human agency.

When I wrote a post about Harry Price I said that the problem with investigating the 'supernatural' is that the investigation is rarely or never scientific. And it is very apparent that despite his observation, Grosse didn't really get the scientific method and the fact that a lot of it is about controlling things and seeing what happens. For example during the Channel 4 documentary it is said that the family went away on holiday at one point and when they came back the events started again. It does not specifically say that no investigation was done while the family were away, but if you want a controlled investigation of alleged paranormal phenomena the absolutely first thing you do is get the human agency out of the house, especially if they're teenagers. This is a terrible missed opportunity, particularly in the light of Janet's statement that the house was not haunted.

The Channel 4 documentary brings out the unscientific nature of the investigation very well. The only sad thing is that the fact that participants are unquestioningly saying that they believe the house was haunted will still be enough to persuade some people, so perhaps it could have been improved by the addition of what constitutes scientific evidence and what doesn't.

Get the house locked up with nobody in it and CCTV covering every nook and cranny, get the furniture flying and a mysterious voice talking, and then I'll be prepared to negotiate.

I just have three more points to make about both documentaries:

1. I am possibly being picky here but I didn't feel either documentary adequately went into the possible motivations of the participants. At one point Grosse comments that they didn't benefit from these events at all, as if that is enough to indicate that they didn't have agency. It is more apparent in the Channel 4 documentary than the BBC one but the family was fractured, the parents were separated and the kids frightened of their dad when he came to pay maintenance, and the sheer desperation of everyone involved is very evident throughout. That kind of desperation and a mother who is at her wits' ends creates the perfect situation for kids to behave in ways which may be called 'attention seeking', even as spectacularly as this one. Janet is even admitted to a psychiatric hospital for assessment at one point, and you honestly just think the solution would have been within the family. The fact the mother first called the police and then the papers for help with this situation just to me means she didn't have the energy or time at the time to think about what the kids could have been trying to tell her, or to deal with it. There's a reason poltergeist phenomena usually revolve around pubescent kids, it's because they're pubescent kids and they're total nightmares to parent.

2. At one point the 'voice' coming from Janet (which even Grosse acknowledges was shown by scanning to come from the false vocal chords so was physically controlled by her) describes himself as an elderly man who died in the house and who describes his manner of death to the last detail and it is commented that Janet couldn't possibly know this. Seriously? Do you seriously mean that it's impossible a neighbour told their mother over tea when thinking Janet wasn't listening?

3. The 2007 Channel 4 documentary has a re-enactment of a scene in the original documentary, which itself must have been contrived, of Maurice Grosse arriving at the house in his car. It made me actually howl with laughter that originally he was seen turning up in a Hillman Imp but this had somehow been transformed to an E-Type Jaguar in the 2007 version. Look, we all know we were dead stylish in the seventies but not even famous inventors always drove Jaguars!

Altogether two documentaries which make a very good complement for each other. The Channel 4 documentary does a better job overall of trying to apply scientific principles to the case than the BBC one, but I would still recommend them both together.