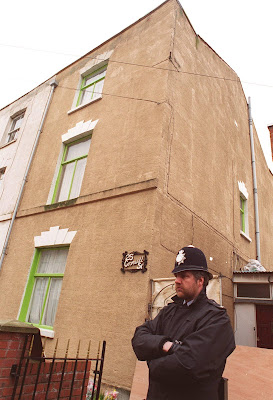 Warning: this post concerns a documentary about serial killing, sexual violence and child abuse, and some readers might find the subject matter distressing.

The Tuesday Special was a 1990s ITV documentary series. I haven't seen any of the others, and probably won't because this seems to be the only one on the internet, and I have to say this is some quality documentary making.

Actually Fred West, the murderer with his wife Rose featured in the documentary, has featured on the blog in this post before, in a parody form for dark humour. The story of the Cromwell Street murders is well known but basically Fred West murdered at least thirteen people between the 1960s and 1990s that we know of. He was a monster of illegal sex and violence, and the household he and his wife Rose ran was an exemplar of dysfunction and abuse. The story of the investigation is fascinating because if it hadn't been for Rose West's solicitors sending a fax with a particular picture to the prosecution by mistake there wouldn't have been enough evidence to convict Rose as well as Fred. Fred actually died right here in Birmingham in Her Majesty's Prison Winson Green while remanded in custody, so never got convicted.

That story is well known, but it actually isn't the subject matter of this documentary, which is about Cromwell Street, the street in Gloucester where the Wests lived and where nine bodies were found buried under the house and patio. It's about the street itself and about the impact on the neighbours of having a mass murderer apprehended among them. Among the wealth of literature on the Wests (who had been flashing a warning light for years before being apprehended and there is no shortage of people who met them because of his work as a builder and hers as a prostitute, so the literature is truly extensive) this short documentary stands out as different.

The documentary is kind about the street but it's clear why the Wests would want to live somewhere like Cromwell Street: run down, poor, with a strictly transient population. In fact one interviewee from the church next door to the Wests' house comments that there is a near total absence of community in the street. It's very apparent from this documentary why a serial killer would choose this street.

Perfectly for a half hour documentary the exposition at the beginning is very short indeed (see I've been reading up about film again), because really it doesn't need very much. Then it goes straight into interviewing the neighbours about what it was like to have mass murder investigated in the street.

What strikes me most is how clever it was to do that. I think by the time this documentary was made, some time after the excavation of the cellar and the press attention, it is very clear that the residents were all Wested out. It is quite an achievement to get them to agree to being interviewed anyway.

And it comes across as very clear how difficult it was even for the neighbours, and they talk about needing counselling. It is all the more impressive that this team got them to talk for the documentary when one lady describes that she had already been deceived by the press (a reporter asked her for a picture of the cellar in her house which was then published as the cellar of the Wests' house) and yet still talked to this documentary about it. One man was encouraged by the press to break into the Wests' house and take pictures for £5,000. It is actually quite reflexive about the simple fact that such a huge murder means that it won't ever really go away for the street or the people who lived there.

After the initial interviews the documentary then goes on to the international interest the scene attracted and ongoing morbid tourism after the crime scene was cleared away. In some ways this is the most flatly shocking bit because I don't think Cromwell Street as a tourist destination has ever died away.

The show draws up the threads by talking to members of the church next door to the Wests' house who feel as if having a mass murderer next door has reinforced that the church does need to be there.

I don't have any criticisms of this documentary.

In summary, an excellent, perfectly paced documentary about a less-covered aspect of the Wests' murders.