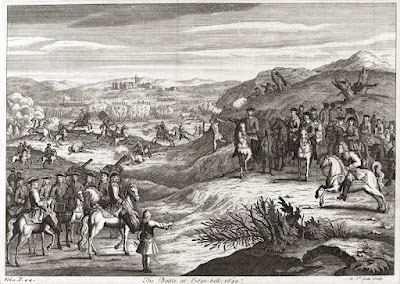 This show is appearing here because it is a show about something that actually happened in history and so it can broadly be called a documentary although it develops the subject somewhat. But when have you ever known me to stick to the rules, whether made by myself or anyone else?

Battleground was a single series show made in 1978 about historical battles which are then re-enacted by war gamers in the studio. I'm not sure whether the word geeky existed in 1978 but it's definitely the word for it, along with blokey. It's also something else I love enormously, which I have decided is slow television: TV which doesn't require much in the way of scenery or effects and moves at the pace of an elderly arthritic snail. This show also goes to show that there was a time when TV wasn't required to move at the speed of light and did genuinely cater for many different interests. I suppose other examples would be that show that shows people playing pub games on the show, and of course Bullseye might come under this heading.

In fact Battleground did require a fair number of props, and (according to IMDB) used 11,000 25mm battle figures for the whole series, supplied by two of the wargamers who took part.

This one is the first episode, about the Civil War Battle of Edgehill (in Warwickshire), the first battle of the Civil War, which took place on 23rd October 1642. It's in three parts of YouTube. Each episode is introduced by Edward Woodward, who of course needs no introduction to the readers of this blog, and I can't fault the introduction he gives. I picked this one because I have an interest in the Battle of Edgehill because it took place not far from here and for another reason which will become apparent later.

After the introduction the wargamers in the episode then play the battle with figures on a board in the screen, with a commentary. Seriously this doesn't sound like gripping TV but it actually is, it's absolutely fascinating and you should seek it out and watch it.

However as a programme about the battle it has some shortcomings which I'm going to have to criticise. If I seem overly savage, please don't forget that shows don't appear here at all if they're complete duds.

My first criticism would be that it isn't completely clear when the account of the historical battle is overtaken by a game driven by throwing dice rather than a plain re-enactment.

My second criticism is that although this programme is purportedly about the battle of Edgehill, it doesn't manage to tell the much of the story very effectively. If you just want a show with people playing a wargame you needn't have any connection to a real battle or it will disappoint people interested in the real battle. What doesn't come across at all is that Edgehill was a horrendous battle in the Civil War which was Britain's most bloody conflict ever (look, the reason we had an empire was because we all wanted to get away from our compatriots). It is clearly stated that it was a stalemate but not stated that it was largely a waste of lives because after three hours of fighting both forces had to withdraw and the dead and dying were just left in the field. No help was given to those not mortally injured and they had to fend for themselves. The next day the corpses on the battlefield were looted for valuables and clothing and their corpses thrown into communal graves. To try to stop what came next (more below), THREE MONTHS LATER the villagers gave Christian burial to the corpses that were still lying on the ground.

You get no sense from this show that Edge Hill was a horrendous event and so as a documentary it rather falls flat on its face.

But my third criticism is the most important: THEY MISSED OUT THE BEST BIT!

Unsurprisingly with the amount of pain and bloodshed something very strange happened, and when it got to the ears of the king he sent a commission to investigate. This is what they reported back:

'On Saturday, which was in Christmas time . . . between twelve and one of the clock in the morning, was heard by some shepherds first the sound of drums afar off and the noise of soldiers giving out their last groans; at which they were much amazed, and amazed stood still, till it seemed by the nearness of the noise to approach them; at which, too much affrighted, they sought to withdraw as fast as possibly they could.

'But then a great vision filled the sky “of strange and portentous apparitions of two jarring and contrary armies – the same incorporeal soldiers that made those clamours, the clattering of arms, noise of cannons, ensigns displayed, drums beating, muskets going off, cannons discharged, horses neighing, cries of soldiers, and the two armies – pell-mell to it they went. So amazing and terrifying the poor men, that they could not believe they were mortal, or give credit to their eyes and ears; run away they durst not, for fear of being made a prey to these infernal soldiers, and so they, with much fear and affright, stayed to behold the success of the business.'

The sounds of this ghostly battle continue to this day and Edgehill is the only ghost story in the records of the Public Records Office as a result of King Charles wanting it investigated.

So a good very brief introduction to the battle and a game based on it, but I may be being slightly unreasonable to expect it to be a documentary. Mike Doran did ask for whackdoodle entertainment and so you can blame him for the ghost story.