Seventies TV: It Ain't Half Hot Mum, Racism, and the Male Chest 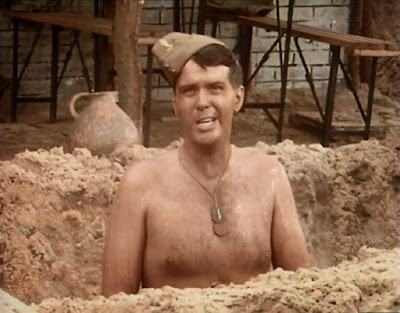 I have never reposted a blog post on here and don't intend to start doing it much or at all. Nonetheless by way of an experiment here is a reblog of a post I wrote in December 2014 as part of a series of posts on Seventies TV. It is exactly as originally published, just with this new introduction. 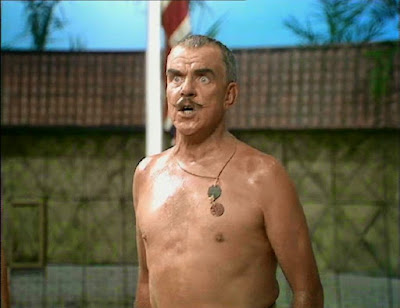 In characteristic mode for this blog I leap straight in with the most controversial. You will not see this show broadcast on the BBC nowadays (there are episodes on youtube); they have decided it will never be broadcast again, for its offensive racial stereotyping. This revolves around the use of Caucasian actors in make-up to represent Indians. This is usually referred to the phenomenon of theatrical blacking-up (I do not agree with the limited role accorded this act in spreading African-American culture on the wikipedia page Source). To me the theatrical phenomenon is just wrong because it is the appropriation of one culture by another. Limited depictions of Black history (by both Black & White people) are at the root of a restriction of Black people - for example I was unimpressed by a display in Black History Week which was intended to show the contributions of Black people to history. In all seriousness it was limited to musicians & athletes. This is completely to ignore the sophisticated cultures which pertained in Africa before White people got there. A similar focus on only one aspect of history creates the over-simplified history where slave traders took Africans into slavery & destroyed African culture. This is to ignore the Western African culture of slavery, & much further south Shaka Zulu took many slaves. 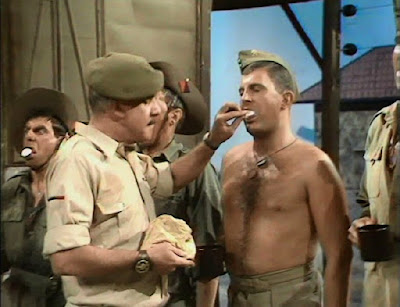 My real point here, similar to what I made about apartheid's legacy in South Africa, is that a comples history involving human pain & oppression, is not best served by the kind of portrayal you get in a sitcom. Ever. Unless it is handled very carefully in a way that clearly makes a particular point, or references other aspects of a complicated history. Therefore, for me, whether in The Avengers, Doctor Who, or It Ain't Half Hot Mum, the portrayal of one race by another is just plain not OK. 'Blacking up' is always offensive. I would personally make one exception for the offensiveness of blacking the face, which would be the tradition of black-faced, or completely black-clad, morris sides. It is highly unlikely that the people who originated it would have had any idea that there were people in the world who look any different from our indigenoue dark Britons, or the blondish, reddish colouring brought by subsequent invaders: 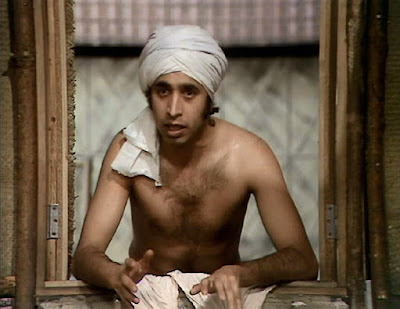 'Blacking-up in rural England is a fascinating subject whose origins go back at least to the middle ages. There is a medieval record in Kent of a group of blacked-up woodland people who said they were servants of the Queen of the Fairies. There is a 1485 law of Henry VII's era that makes having a painted face in the countryside a felony. But this rural blacking was mostly about self-protection. Disguise was the poacher's first defence against identification.' (Source, which see for further history of that sort of blacking-up)

This is even without the context in Britain at the time of increasing racial tension, culminating in the riots of 1981 onwards (Source for context). I am just watching an episode which also stereotypes 'Chinamen'. It is also not even to touch on the painful history of Britain's Colonial occupation of all sorts of places, the perception of homosexuals. It Ain't Half Hot Mum is a series which has been left behind by history & changing perceptions. Certainly I'm finding that any element of plot or character is overpowered for me by the dated perceptions: as a sitcom it's failing to make an impression on me.

Jimmy Perry, who with David Croft wrote this & many other series of the time, thinks is it ridiculous not to show this programme again (Source). I'm afraid that since this show brings me into my own personal history I have contemporaneous memories of their shows (usually, I can only remember repeats in the 1980s of the shows I write about here). I'm afraid the memories that most of their shows bring for me are of being forced to watch them because it was a Sunday afternoon or whenever, & there was nothing else on the TV. I certainly wouldn't otherwise have watched Hi-de-Hi or You Rang, Me Lord. I have slightly happier memories of Allo Allo, although that hasn't worn well either. Even at the time our (French) French teacher was grievously offended by the show. It seems Perry & Croft's shows have had their day. And so, I come to another way in which mores have changed since the seventies: it may seem that I have exhausted the serious subjects but this one is undergirded by some serious matters. When I was a child in the seventies, I remember that men used to work & go around their daily lives bare-chested & it caused no comment. I can remember our postman stripped to the waist, the milkman coming to collect his money clad thusly, & the latter even doing his round in swimming trunks in the hot summer of 1976. The contemporary extremes of weather aside, it seems perceptions to the male chest have changed markedly in the forty years that have intervened.

Feminist theorists had already identified the problems of objectification that then afflicted women & have since come to affect men also:

'Objectification theory suggests both direct and indirect consequences of objectification to women. Indirect consequences include self consciousness in terms that a woman is consistently checking or rearranging her clothes or appearance to ensure that she is presentable. More direct consequences are related to sexual victimization. Rape and sexual harassment are examples of this. Doob (2012) states that sexual harassment is one of the challenges faced by women in workplace. This may constitute sexual jokes or comments, most of which are degrading. Research indicates that objectification theory is valuable to understanding how repeated visual images in the media are socialized and translated into mental health problems, including psychological consequences on the individual and societal level. These include increased self-consciousness, increased body anxiety, heightened mental health threats (depression, anorexia nervosa, bulimia, and sexual dysfunction), and increased body shame. Therefore, the theory has been used to explore an array of dependent variables including disordered eating, mental health, depression, motor performance, body image, idealized body type, stereotype formation, sexual perception and sexual typing. Body shame is a byproduct of the concept of an idealized body type adopted by most Western cultures that depicts a thin, model-type figure. Thus, women will engage in actions meant to change their body such as dieting, exercise, eating disorders, cosmetic surgery, etc. Effects of objectification theory are identified on both the individual and societal levels.' (http://en.m.wikipedia.org/wiki/Sexual_objectification) 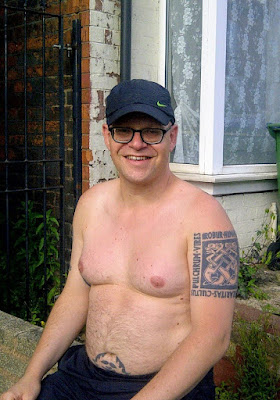 I have a feeling that if (in a rather bizarre set of circumstances) this show was remade today, it would look quite different. The actors almost all appear bare-chested at one time or another, without the slightest indication that it is sexual. They also have a greater mixture of body shapes than would probably be presented today. They have more body hair & a greater percentage of body fat. I would contrast this with, say, the lead actors in Supernatural - six packs & no chest hair were the order of the day there. I would recommend http://phdavies.co.uk/2011/08/18/male-body-fascism/ as an interesting commentary on the rise of body fascism for men as well as women. I've also managed to ignore the class attitudes of the show - the whole colonialism thing aside it is interesting that bare-chestedness is often seen as a working-class thing. Certainly if you look at the men in the summer in any city the ones without shirts will be more likely to be working class. The officers remain shirted & the 'men' are more often bare-chested. This is not even to touch on the subject as it pertains to women - once again an apparently superficial TV programme stands as a springboard into some quite deep sociological matters.