Hammer House of Horror: A Visitor from the Grave 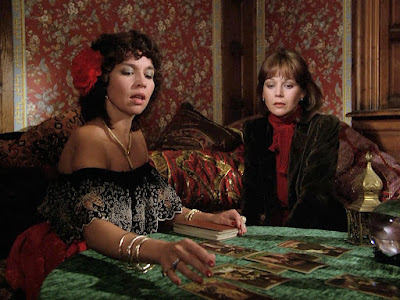 Surely nobody who has read this blog will be surprised that I have my own particular perspective on this episode and that it differs completely from the consensus of opinion of pretty well everyone on the face of the earth? There isn't that much online about this one, possibly because it's unpopular and many of the reviews are probably by people feeling they have to review the whole series, but the reviews are overwhelmingly bad. And I honestly don't think this episode deserves the terrible reviews it gets.

This is another episode using a lot of actors and crew who had worked on Hammer films previously. I have read repeated comments that it would be more suited as an episode of Tales of the Unexpected and is rather atypical coming out of the Hammer stable. I can see that its murder story is out of the ordinary for the studio, however I think it actually contains many of the tropes of the standard horror film: the happy couple, the invasion motif, attempted sexual violence, and a cast of quite colourful, if rather dodgy, characters.

Another common criticism is that it is obvious what is going on. I'm not sure about this one either, since I'm always mindful that old TV doesn't stand up to the sort of scrutiny we give it with our ability to repeatedly watch, pause and so on. I also wonder whether we're more sophisticated than viewers would have been in the eighties: I suspect that we all of us have seen a lot more films and TV now than people then typically would have done, and I just think that makes it easier for us to recognise the standard 'tropes' of TV and film. If you watch this through taking the scenes as they are presented to you, I think you would only see the actual solution as one possible one. Otherwise it does present a fairly spooky story. So the weakness may actually be that the episode requires the volitional suspension of disbelief, and our shortcoming may be that we are less able to do that than we used to be.

The strongest criticism is that when you know the solution the episode has credibility problems that are exceeded only by our government, and even worse that these problems are only apparent when you know what is happening. If you follow the plot of a woman who kills an intruder and starts being 'haunted' by an apparition of him, they don't become apparent, but when you know that that isn't what is happening you then have to account for the spooky things, and some of them are difficult to do. A dead man who keeps appearing is perfectly simply explained, but a fake police car can be a bit difficult to do unless you are a film studio! I'm afraid I've phrased this paragraph rather awkwardly in an attempt not to give the plot away.

Ironically I think the most obvious pointer to what is happening is that Harry, the woman's other half, talks to her like a small child, and is frankly abusive to her.

Again in direct opposition to the rest of the entire universe I rather like the scenes with the tarot reader and guru, simply because they are so ham and overdone. They provide an exotic streak because otherwise a lot of the show is set in the couple's thatched cottage, which is of course a wonderfully atmospheric setting in which to start seeing things.

In conclusion, despite the terrible reviews which I don't think the episode deserves, I don't think it should be avoided , but just requires the viewer to go along with the plot as presented and not be too analytical.