Hammer House of Horror: The Two Faces of Evil 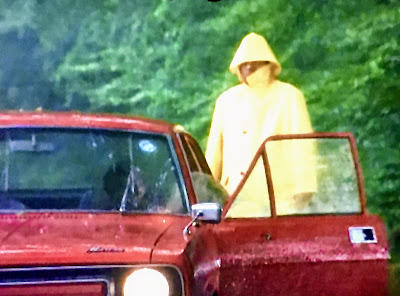 Absolute fan favourite, this one. Not surprising, when it is inspired by many of the classic tropes of horror films.

In the reviews online you will, of course, repeatedly see Invasion of the Bodysnatchers (1956) mentioned, in which aliens replace people with copies. It's an obviously great horror classic, and this episode presses all the right buttons to make the fans think of it. You will also see that The Stepford Wives (1975), about the titular town of strangely conformist wives, is mentioned as a possible inspiration for the conclusion. I'm not saying there's anything wrong with this: humans have been around for a long time and we can't always have completely original ideas!

But I would suggest another possible inspiration for this story, which is the urban legend of the vanishing hitchhiker, in which a motorist picks up a hitchhiker who then vanishes and not infrequently leaves some item of clothing behind. This was popularised by Brunvand's 1981 book about urban legends called The Vanishing Hitchhiker, which has unfortunately led to an impression that this particular folktale is a) native to the USA and b) modern, because of the car. There are variants internationally and it was recorded as far back as the nineteenth century, obviously always involving various modes of transport.

It may seem unrelated to this tale because the hitchhiker really doesn't vanish (in fact I think the mother wishes he and/or her husband, would vanish). But there are endless variations of this tale, including ones in which the hitchhiker continues to make subsequent repeat contact with the driver. In this case it is as if he vanishes while the mother is in hospital and then reappears swapped with the husband, so that it is the vanishing hitchhiker tale merged with the Invasion of the Bodysnatchers plot.

There is an additional feature of this episode which makes me think the vanishing hitchhiker may have suggested it. You don't notice it as the episode is playing because in each case it's mentioned very naturally, but the family's property and clothing are given more importance in the hospital sequence then is really necessray for the plot. Lo and behold, when you start looking at the variants of the vanishing hitchhiker, a recurring feature is that they often leave an iten of clothing behind, or take an item of clothing which is subsequently found elsewhere. It's a kind of sub plot of this show.

Honestly apart from trying to be clever and identifying possible sources for the plot, I don't have anything to say for this show except for unconditional praise, and I definitely think you should go and watch it.

My only criticism would be that if you've seen a lot of horror films, when the mother gets in the ambulance at the end you just know what is going to happen next. That said, your suspicions about the nurse and the ambulance driver are confirmed by the looks they give, although you are left to imagine, and be terrified of, what may happen next.

An excellent, masterly, horror tale, with strong influences of some classic films and a classic folk tale.

As for what is happening in this country, who the fuck knows any more. Although I'm sure the desks of the king, the leader of the opposition and the chair of the 1922 committee are like letter time at Hogwarts.

So have a piece of history, which will hopefully be repeated in the none too distant future.

This blog is mirrored at culttvblog.blogspot.com and culttvblog.substack.com (where you can still subscribe by email if you want). If you want to support me and this blog, you can buy me a coffee or a box set at ko-fi.com/culttvblog.
80s TV Hammer House of Horror