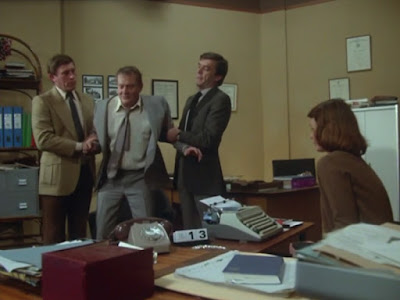 One of my favourite episodes of this show, this, so I'm going to allow myself to go into raptures of praise and dreaming.

As is the case with every episode of this show, this one sets us up to expect one thing and then gives us another. In this case it draws heavily on the idea of the scolding wife. Norman Shenley's wife as played by Pat Heywood is like a mix of every stand up comedian's mother in law ever, mised with a bit of Liz Truss, Margaret Thatcher (you may remember the scene in Spitting Image where Thatcher wakes up Dnnis by pouring a pot of tea in his crotch), and every other shrew conceived in history by the sexist male imagination. It sets us up to feel sorry for Shenley.

Except it doesn't simply do that. In a very clever way it also mixes in the dream-like nature of the beginning of the episode (which is of course actually a dream) and also the plain fact that Shenley is a philanderer and just generally unpleasant. By doing this the show completely wrong foots us and leaves us feeling as confused as Shenley himself.

The dream-like nature of the episode is aided by it being set in a very empty version of Avengerland. For example in the estate agents office Mr Shenly owns you hear traffic going past but never see it, he never comes across another car on the road and meets nobody except the characters in his dream. This empty land is yet filled with traditional British symbols, such as the red phone box. Beyond the small cast we see, the only apparent other person is working a wrecking ball, but when we see who it is it turns out to be SHenley's secretary.

I don't often praise specific actors for their performances in shows but you simply have to praise Lucy Gutteridge for her performance as the secretary. Because of the various dreams she appears in she plays so many different roles, including whore and reserved secretary.

I like the psychological premise of this show, which isn't really about the nature of dreams. It's much more about the classic fear we all have of exposure of any sort. Shenley basically hates his wife and wants her to divorce him, which she won't do, and this is really about his inner motivation being revealed in his daily life and then turned on him. This is the classic exposure nightmare really, such as the classic example of dreaming that you are naked in public or you say something you are thinking but didn't mean to say.

Cleverly, in my opinion the show doesn't leave a simple answer to what is going on but leaves it ambivalent because what we see is him being manipulated through dreams into killing his wife and the secretary going off with the policeman. However in my opinion this ending didn't necessitate any of the other events in the show, for example there is no reason SHenley's wife had to die for that to happen. So it doesn't make sense... Just like a dream, and we're left trying to make sense of it. I really like this approach. Of coufrse if you want a clear cut solution you wouldn't like that.

The other irony of course is that he has now got what he wants because having murdered his wife, he is no longer married to her....

Incidentally since this blog is about TV I would have to say that the TV coverage of the Conservative Party Conference here in sunny Birmingham has been sorely deficient in not mentioning any of the protests: not one of them appeared in the media. I can't even say that that is as a result of bias because I am delighted to say that the media have finally started savaging this fascist, illegal, unrepresentative and murderous government. For example this magnificent extract from the interview by Sky News's  Beth Rigby which believe it or not didn't get any better for the PM after this (in fact every time she opens her mouth Labour use it as a party political broadcast):