Hammer House of Horror: The Mark of Satan and Conclusions 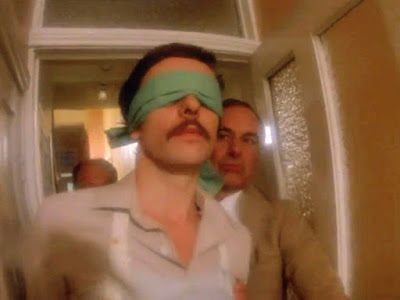 The Mark of Satan is the final episode of Hammer House of Horror and it's a belter, straight out of a classic horror film stable.

Graveyards, castles, and mortuaries are classic places to set a horror film and this one goes for the final one. It's a great place to set a horror film because clinical places are uncomfortable and being a mortuary rather than a hospital you get acres of bare flesh so it creates whatever emotions in triggers in the viewer personally. In fact in discomfort and bare male flesh it's a bit like visiting this blog.

There is one aspect of this episode which has gained a different significance since it was broadcast in 1980, and that is that Edwyn, the protagonist, thinks he has been infected with an evil virus. It actually came to me as a bit of a shock that that wouldn't have had the strength then that it does now! In fact did you know that it was last week the vaccine was supposed to be activated and nobody who's been vaccinated is supposed to be human now? It would be hilarious if it wasn't so dangerous.

Of course Hammer doesn't leave us without our fair share of dangerous and in fact Edwyn thinks he has caught the virus off a man who drilled a hole in his own head (ouch) because he also thought he had this virus. It also gives us a very good portrait of paranoia - and I mean proper paranoia as in an actual illness - and depiction of how someone who is paranoid makes connections and fits everything into their delusional network. See, you don't get this sort of thing on normal TV blogs.

And then we reach the absolute height of this show in the dream (or nightmare) sequence where we are genuinely in classic horror film territory. It's totally textbook.

My only criticisms would be that the requirements of television make the dream sequence a bit tame - it could have done with some gory, some sex or both - and that it's a bit obvious how it's going to end. But then the point of television is often to tell us stories that we know the ending to because otherwise we wouldn't want them to end.

An excellent episode of this show.

Conclusions on Hammer House of Horror

One of the funny things about blogging about TV is that naturally I have to pay increased attention to the shows I want, which was always one of the points of this blog, and also that that attention makes me pick more holes in the show and then I feel more bad.

Two things have been very apparent to me in this run through Hammer House of Horror in order:

The first is that even beyond being an anthology series, it is rather patchy. There isn't even really a unifying theme that runs through the series. In fact I have noticed in online reviews that some reviewers feel some of the episodes aren't even really horror and would be better suited to Tales of the Unexpected. On reflection I have concluded that this may be a reflection of Hammer being at the end of the popularity of its classic films and at a bit of a loss to know what to do next.

And yet...this is Hammer we are talking about here. At its absolute best this show's episodes are like mini horror films done with the reassured touch of an expert. This is the second thing, that this show is still an absolute belter.

So in conclusion my blogging through this show has revealed how the studio's fortunes at the time probably impacted on this show and also shown that they hadn't lost their touch, just lost their market.