Hammer House of Horror: The House that Bled to Death 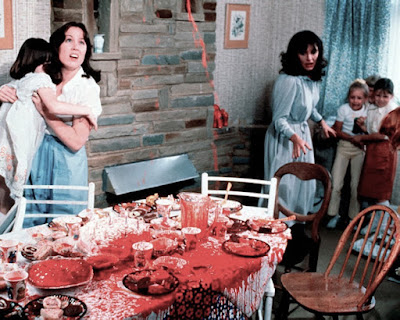 This may be the most chewed-over episode of this show so apologies if I just happily agree with what everyone else says about it. I am virtually certain that everyone likely to read this blog will have watched this episode or at least have come across discussion about it online.

As always with this series it messes with your emotions like nobody's business, right from the start. I honestly find the scene of the hisband poisoning his wife incredibly difficult and graphic.

From here on, the episode cleverly uses all the classic tropes of haunted house horror films to tease us and build up the horror in the viewer, alternated witrh scenes of normality just to really build up the tension. I particularly love the thing-behind-the-wall trope, cleverly juxtapositioned with a scene of the mother being trapped in a bedroom with a leaky gas fire, to create a sensation of breathlessness and claustrophobia in us. Obviously, the reason this episode is so extensively discussed it that it's Hammer doing what they do best.

I couldn't place what I had seen Nicholas Ball in, and then realized that in my original post about Hazell I identified that he seemed to have difficulty keeping any clothes on. That's also the case here and I suspect he is/was what my mother would have called a sexy piece. Now you may say that's rich coming from a bloke whose profile picture has been bare chested for something like eight years, but in this show the implication of his lack of clothes is definitely sexy. While I wouldn't mind if they did, I don't think anyone is going to start using me as a pin-up. As I remember Ball's nudity tended to be quite sexual in Hazell, which I'm obviously going to have to watch again because it's wound up under a heap of DVDs for some time now. I think the sexiness of the couple's relationship provides a clever counterpoint to the strange things which keep happening, because it keeps the story going that they are a happy couple who've bought this house and are suffering as a result.

I have two criticisms:

One is that the show is frankly derivative from The Amityville Horror, which would have been fresh in people's minds at this time. Of course it is a similar story of alleged unexplained phenomena in a house after a brutal murder, with the occupants writing a book about it, which incidentally has been criticised for its accuracy. In fact the whole Amityville Horror story has been criticised. It's a bit obvious that the plot here is pretty much what happened at Amityville, just with a twist in the end that screws it up for the family.

The other is that if you keep your eyes open there are heavy clues to what's really going on. When the dad says that he's thrown away the dagger and then it mysteriously reappears at the children's party, we know that it hasn't magically reappeared and it's obvious what's really happening. It's also a bit obvious that the strange things in the house happen with witnesses, primarily the neighbours. I think typically if you have paranormal activity happening in your house you would tend to keep it to yourself, at least on television, to allow the story to develop. I think naturally these hints get lost in the horror the show engenders in the viewer.

So altogether an excellent episode in terms of the horror it engenders, but open to criticism of where it got its plot from and a hint on the way of what's actually happening.