Hammer House of Horror: Guardian of the Abyss 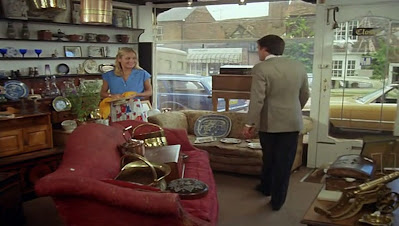 We're in classic Hammer territory here, with what in the seventies would have been called a cult, a magical antique which may have belonged to John Dee, antique dealers, people cheating each other and getting what they deserve and lots of mythology taken from real occultism. I have only just realized that these things have been surprisingly missing from the series up until now.

This episode also features lots of actors and crew who had previously worked in Hammer films, which may be another reason it feels so familiar and Hammery. Perhaps for this reason I'm surprised to find I don't really have a great deal to say about this - it is essentially a Hammer film adapted for TV and what's not to love? Even though Hammer hit difficulties in the seventies and stopped production five years after this show was made, I think this one shows that they could still do their thing. It suggests that the problems they had were also more to do with competition than their own ability to continue producing films to a successful formula.

I see that a lot of reviews say that the episode tends to drag a bit in the middle, and warn that that is the place where you have to pay attention to pick up clues of what is coming next. I personally feel that many Hammer films can seem like they are dragging, and I feel it's perhaps a technique of the horror genre, to lull you into a certain ennui before the film shocks you awake again.

Just don't watch this with any antiques in the room with you.