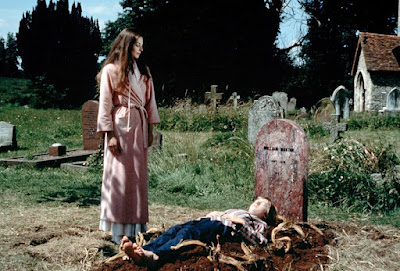 I have always loved this Hammer House of Horror, so of course it was no surprise when I checked what other people thought to find that it really isn't a fan favourite and I found several reviews which were really very critical of it.

To get the criticism that I agree with out of the way: the opening scene where William takes poison in his dad's lab and dies is just wrong from beginning to end. His reeling round the garden gives an overly dramatic impression and as far as I can see everyone is agreed that it comes across as funny rather than the horrifying death of a couple's young son. It also doesn't help that (in my humble opinion) the Mortons under react so that the drama is left to the character who dies, while they watch. To be fair this reflects exactly the same level of emotional competence they show in the rest of the show, but it looks wrong if you haven't seen that they are utter duds.

And I really can't overstate how utterly odious they are. Horrible. Awful people. Although don't go running away with the idea that I've taken a dislike to them, but they are absolutely horrible. Every scientist in world history has had a lively awareness of the sheer dangers which live in the lab. Except Terence Morton. We are therefore set up to experience the strange feeling of feeling like this couple brought the death of their son on themselves, while also feeling utter shits that we're feeling that, because we really should feel at least some sympathy for them. Does any parent deserve to hear their dead child say, 'I should have been your lifetime's work'? Well, this programme shows a world in which they do and I'm so here for it.

But they then treat their next child, who is adopted, as if he is some kind of unworthy recipient of their charity. They really are odious people. It's also apparent that they have literally no emotional intelligence. Does anyone in their right mind automatically expect a child they've only met a few times and are adopting, to address them as mother and father? I'm not sure but I do know that when James addresses Mrs Morton as mother it comes across like he's taking the piss, and I love him for it. Because she's just asking for it.

So there's a lot here about getting what you think you want and taking the consequences of your actions. Honestly, the horror here is the way we all would hate those kind of experiences ourselves and so they are delightfully horrendous when we watch them happen to someone else. Again it's the feeling like we shouldn't be feeling glad these things are happening to someone else rather than us, but it's OK because they're shits.

As always with excellent television the story is multi-layered and capable of interpretations on several levels - you could even see a strong element of colonialism in this one because Morton is working on special plants to feed poor people who never see steaks in 'places like Africa'. When the dog goes wild in front of his important visitors they try to interpret events in terms of their notional cultures, and it comes across as very stereotypical. So we have a white man making food to feed poor people, while he is still rich, and the people of colour are patronised. This is an extension of the theme of expecting things to be how you want them, and people to behave, and apecifically an adoptive child just to fit in with your privileged life where you keep seeing people more important than him. It's all about telling other people to do what they're told.

As appears to be a common theme with these, the more apparently magical elements, such as Mrs Morton losing control of the car and the dog turning wild, remain unexplained, which gives it all the more of a punch.

I have seen a criticism in a couple of reviews that Matthew Blakstad is miscast as James. I literally can't disagree with this more - he is excellent as the unemotional, puzzling, mysterious child. He gives an excellent impression of early psychopathy and does an excellent job of saying all the things he's not supposed to with a completely straight face and sending his mother distraught. Apart from the lack of emotion he reminds me very much of myself at that age (lol).

However the actor I do think is miscast is Gary Bond as the father. He excelled as less establishment characters in Wake in Fright and of course initiated the performance of Joseph (as in the supposedly technicolour dreamcoat* which isn't in the bible) and honestly I feel that he was probably better in more eccentric characters. The other problem (and obviously this isn't necessarily objective) is that he is widely known to have been Jeremy Brett's on/off lover for a long time and possibly knowing that I find it very difficult to take him seriously in the role of husband and father. I really don't know whether this is just me but he seems all wrong in the character and I can't put my finger on anything specific.

Apart from the two queries I've mentioned this is otherwise an excellent drama, perfectly paced and which expertly plays with the viewer's emotions and gives us a real feeling of discomfort. Also highly recommended.

*SInce it has come to my attention that people who consider themselves far right read this blog (you know how you are 😉) my only option is to take the knee and step up the wokeness and so here's a queer biblical interpretation of Joseph and his coat. The coat he has in Genesis 37 isn't multicoloured at all, and while the Hebrew is unclear a valid translation is 'coat with long sleeves'. The King James Bible is full of all sorts of blinds and this may actually be one of them because the Hebrew phrase for the coat with long sleeves (ketonet passim) only appears elsewhere in 2 Samuel 13 where it is described as how the virgin daughters of the king were clothed in earlier times. So Joseph was dressed as the virgin daughter, not son, of the king.

You won't hear that in Sunday school and you won't get that on sensible TV blogs. Lucky I'm not charging you admission for this experience.