Hammer House of Horror: Children of the Full Moon 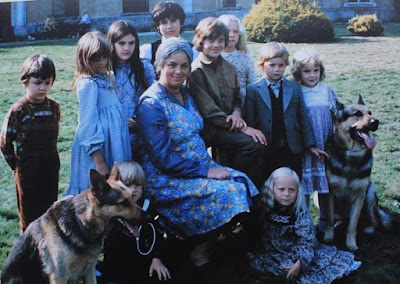 I was surprised to find, when reading round to write this post, that there are reviews of this one which are distinctly lukewarm, holding that it is a competent but rather pedestrian episode in the series. I was expecting what the other (in the majority) reviews said, that this could well be the best episode and is pretty bloody scary.

The major thing that this episode does for me, although I already knew it, is reinforce beyond any doubt what a versatile straight actress Diana Dors actually was. She plays the creepy part of the maternal Mrs Ardoy to perfection, and her Dorset accent never falters once. Seriously, it's worth watching this just for this performance alone. There isn't a hint of the sexiness for which Dors was largely feted in this role. The other completely straight role I would strongly recommend seeing her in, although she was younger and even I can see that she was stunning, would be her role in the film Miss Tulip Stays the Night (1955).

In this show, she is largely what single-handedly racks up the suspense. Honestly, if somebody tells you their dog won't hurt you, it's always time to turn on your heels and run, because if they are happy their dog is safe around people they won't see the need to say anything. She then calmly denies the obvious wolf howling is a dog (see, even more reason to be scared of the dog) and encourages the couple to stay in their bedroom so that they don't frighten the children. By that time, if I'd been them I would have spent the whole night locked in the wardrobe.

As so often happens, watching a series through in order and paying attention as I am now, reveals things you're not expecting. Here there is a slight problem in the series which is that despite every review I have read saying Tom and Sarah's car breaks down, what actually happens is that Tom loses control of it for a time. None of the controls respond to him in any way. The problem here is that this same thing also happens in Growing Pains. I have even checked, and they were written by two different authors, but I feel like having that happen twice in the same series should have been picked up and changed because twice in the same series is too much. There is then the additional device, also used in The Silent Scream, of taking the thing that causes the horror and suspense, and bringing it back into the protagonist's own world after giving the impression that he's escaped it. It is of course entirely possible that I'm being rather pernickerty here, and in fact I feel rather bad making this criticism, because I may not be being that reasonable, expecting a horror show not to reuse the standard tropes that make horror, horror.

I have read that there are at least two different versions of this episode, and that the original show as broadcast on TV in 1980 included a lot more sex and gore, which were cut from subsequent video releases. I have no idea what you would get if you bought the current DVD box set, but my own file which is one pirated off a copy on the internet, must be of the original release because there is no sex  (in my opinion) or anything beyond implied gore in my copy. I can't therefore comment about what the full version might be like.

So in summary an episode of this show which uses many of the standard horror tropes as you'd expect, and which highlights the acting ability of an underestimated actress. It might be gory and might be sexy, but you'll have to watch it yourself to find out.

I just want to share some wonderful videos with you that I've found online. The first two are the shipping forecast parodied in inimitable style by, respectively, Stephen Fry and Brian Perkins.

And this video is for if you're stressed at the world burning around you, put this on and I'll guarantee everything will suddenly seem better.

Finally, possibly mainly for non-British readers, something was reported in the news in an unnecessarily idiomatic way which may not translate. You may have read that after Prime Minister's Questions this week the Prime Minister went to the tea room in the House of Commons. This sounds like things are fine and she had a cup of tea after PMQs (because why would we comment on that), but really this means she was going onto their own territory and desperately trying a charm offensive on the MPs who had previously been ominously quiet and holding their heads in their hands in the Chamber while she was failing to answer Sir Keir's questions. This is a parliamentary way of saying she is fighting for her life - currently William Hill is giving odds of 7 - 2 that she won't last the year out.

This is the excellent Yvette Cooper greeting the new home secretary and it's glorious.
This blog is mirrored at culttvblog.blogspot.com and culttvblog.substack.com (where you can still subscribe by email if you want). If you want to support me and this blog, you can buy me a coffee or a box set at ko-fi.com/culttvblog.
80s TV Hammer House of Horror