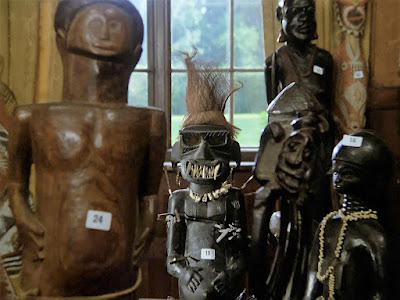 Another episode of this show which has been extensively chewed over online, so again apologies if I don't have anything original, or even sensible, to say.

This one brings that horror staple, the Hollywood idea of 'voodoo' into the modern world. I don't think the V-word (in this house we prefer to spell the word Vodou and understand that it refers to what may be the world's oldest religion which is widely misunderstood and the fear of which is because of the birth many of its forms found among slaves) is explicitly mentioned in the show, but I don't think there's a single review online which doesn't use the word. In this the word draws on the strong colonial and racist tradition in many horror films, by which African equates to primitive and evil.

The irony is that the show shows a mixed-race couple. I particularly love that Angela Bruce has a Durham accent so is clearly British and would confuse the steretypes you'd expect in a show about this sort of thing.

The racial stereotypes arem't questioned during the show because it's a straightforward evil fetish story.

I do love that the characters are rather over-done. The strange villain who behaves threateningly towards the couple in his car and then gets stabbed to death after they put a knife in Charlie boy, is particularly interesting. You can't beat giving someone a facial scar to spell 'trouble' in television terms and add menace to his already bizarre behaviour.

I'm going to go out on a limb and say that if this one has a moral at all, it is not to accept any family heirlooms, which by definition are things people have never got up the guts to throw out.

So in summary, a straightforward 'voodoo' horror movie with all the misconceptions and assumptions that implies, just without a zomblie, transplanted to a TV show set in 1980 Britain.