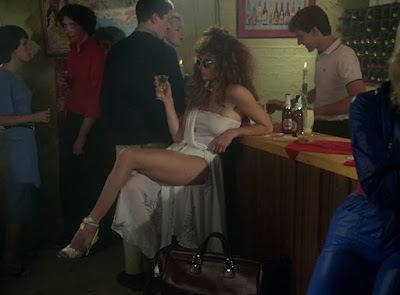 I must apologise in advance if this post contains mammoth errors of fact or is just confusing: in all honesty this episode has always always managed to confuse me, and try as I nught, I can't seem to follow the plot, although I am easily confused these days. Because of this I would recommend the synopsis here.

In my post on The Silent Scream I commented that I had always had the impression that it had a very kinky dynamic, which yet isn't picked up on in most of the reviews online. I am indebted to Caffeinated Joe for letting me know that I am not alone in this impression and I have since come to a conclusion that the kinky dynamic is deliberately never made overt in that episode, possibly to make the viewer feel the dynamic and also the feeling that it was totally wrong to be feeling that. After all, it's not overt, so obviously YOU are the only one feeling it, you filthy deviant. It's actually a very clever way of ramping up the feeling of wrongness.

I also wonder whether Peter Cushing would have appeared in a more explicitly sexual show.

Anyway, in this one the sexuality which has tended to be rather soft-pedalled in this show up until now, gets loud pedalled until it at seventies sex comedy levels. There is LOADS of flesh on display in sexual contexts, both male and female. Even when there isn't flesh on show it's sexy: the final victim, Piers Brosnan, wears a tracksuit that clings to him so much it basically says, Look, I'm male! Unusally for a horror show, there's a reference to possible homosexuality being involved in the murder at the start, but of course that would be far too simple. I actually think this episode does a similar thing as The Silent Scream by making the viewer feel the sexiness of the episode - just with the difference that the sexiness is much more obvious. So rather than feeling an unexpressed sexual dynamic and feeling uncomfortable as a result, here you are explicitly thinking about sex and made to fear that any random sexual partner may possibly cut your heart out of your body.

Looks like the only way to avoid that is to be gay, at least according to this episode.

It's not only the sexy bit which is made a bit extra here. We have the descendant of a Carpathian countess whose nephew just happens to be a drag queen. We have the whole cutting hearts out thing. We have an old ancestor who also did this. And the scenery. The scenery! The sets are of two sorts. Some are just total seventies recall for those of use who remember them. And the others are absolutely wild, possibly to indicate otherness, foreignness and weirdness.

I just have two criticisms. The first is that it is fairly obvious who is doing the killing. 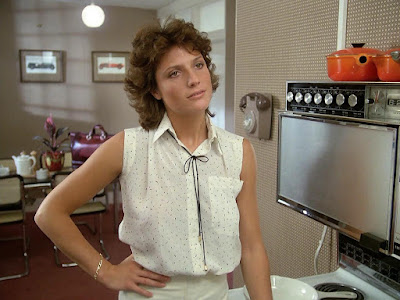 The other is basically to say how many genres does this episode manage to squeeze in? There are definite elements of seventies sex comedy, which are cleverly twisted to make you frightened ever to take your y-fronts off in front of anyone ever again. There is the mythology (in its broadest sense) aspect of the tale of the lady who cut out hearts and that these murders are happening again in close proximity to her descendant - classic Hammer territory here. There is the way out aspect where everyone in the show is pretty much a character and larger than life. And finally, there is the detection aspect to this show. You might feel that the detective aspect outweighs some of the others. My criticism really is that it feels like these different aspects at different places, so that if you just turned on in the middle you would think it was, say, a sex comedy and nothing else. For example the early scenes with the police make it feel very much like a detective show but they then don't feature and it can feel disjointed.

I think given that I've always felt confused by this episode and my idea about it consisting of disjointed parts borrowing features of different genres, it that I suspect this script was asking to be a film. In 90 minutes, you could flesh out the different aspects and also mix them up a bit more so that they are co-existing. If I had to think of a TV show that could carry off this script, I wouldn't think of any straightforward detctive show, but you just know that this script is asking for Jason King to drive up in leather then wander through in a kaftan don't you? Now THAT would make the rest of it seem less wild.

So in conclusion, I would have to say that the plot may be flawed (although this is a matter of taste) but this is still a hugely atmospheric Hammer House of Horror episode.