Documentary Season: The Power of the Witch - Real or Imaginary? 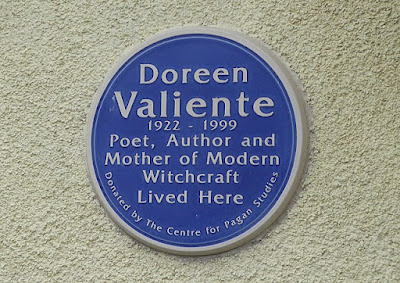 The Power of the Witch - Real or Imaginary? is a 1971 BBC documentary about contemporary witchcraft, which is appearing here for Samhain. The veil is thin and so is my damn patience.

Let me say right at the start that this is an excellent documentary, purely because it does a good job of trying to marshall the information on perhaps the most difficult subject there is. The word witch and the idea of witchcraft have been ridiculously slippery over human existence and this documentary, I think, chooses the correct combination of interviewees. We have actual modern witches, a vicar, a member of the Church Army, a psychologist.

Obviously I can claim this to be a subject that I know a fair bit about. The interviewees all give their own particular view of the subject, and while that is good in itself I would wonder whether the production team knew enough about the complex subject to provide enough context to what was said. For example you have the Church Army officer talking about the devil and you might get the idea that Doreen Valiente was worshipping the devil and you would have no idea that she wouldn't believe in the devil at all. This is not really a criticism, as such, this show was made in the white heat of the occult explosion of the sixties and seventies, and some confusion was bound to happen.

Anyone who has been around in the fringes of the religious world will recognise some of the names here; in fact the witches featured here are legendary figures of twentieth century paganism, and yet strangely reflect the sort of characters you meet at any pagan moot. We have Old Doreen Valiente, who bears the title of Mother of Modern Witchcraft for good reason: straight talking, no nonsense, and you wouldn't want to get into a row with her. We have Alex Sanders presenting his own self-aggrandizing version. Oh goddess, I've already started arguing like a witch. We have Eleanor (Rae) Bone: very solid and practical. And finally we have Cecil Williamson, owner of the Museum of Witchcraft in Boscastle, whose contribution as far as I can tell, is complete fantasy.

However the real achievement of the show is to contrast the plain speaking straightforward witches with the frankly rather hysterical paranoia of the church. Honestly, anyone who thinks there's an organized conspiracy of magical people or Satanists should try working in project management for a week and seeing how easy it is actually to get people to work together. Let alone keep a secret. I suppose the witches should be impressed that people think they have that power.

Some of the show is, in my opinion, complete fiction, although I can see that for the production team they have just reported what they were told and it would be impossible to check what they were being told about a supposedly secret society. I have read widely in weird shit, known people online and in the local community, for over thirty years and there are words and practices mentioned in this show that I have never heard of, but are presented as normative in a whole (imagined) cult.

People do imagine secret societies, and the thing is, people being what they are, you can find out about them. You can find out what happens in a Masonic lodge (not gonna lie, I've been invited in the past, and it really does absolutely nothing for me), but I'm far from convinced about the Illuminati. Which of course brings me to the tofu-eating wokerati, and I think it is a weakness of the show that it doesn't consider the nature of human behaviour about belonging, identity, power, politics, etc, enough, although of course that would have made it unwieldy. The fact is that people like to belong to something, and the Wokerati arose as a result of a (frankly rather deranged) comment in parliament by the home secretary when she said that the tofu-eating wokerati were creating chaos. Literally overnight, the wokerati sprang into existence from nothing. Sales of tofu have gone up. You can get merch, people have it all over social media: when you define yourself against another person's position, you immediately become what they are frightened of, and become their witch.

The other aspect of human behaviour which fascinated me gave rise to my favourite scene in this show. It's the scene where the Church Army officer is talking about the young people he talks to and their experiences in the witch cult. This had me roaring with laughter because it was very obvious to me that the kids were pulling his leg and he'd been taken in. The consistency of what he was describing suggested that he was asking the young people leading questions and of course they were just agreeing to horrify him.  If he'd ever met any actual witches he would know that trying to get them to work together is like herding cats, and being from Birmingham he should know that the police are suspicious when every witness's account of a crime is identical, because it means they're not real.

I have high praise for this show's approach to history, which is far better than usual. My only criticism here would be that they quote the ghastly Margaret Murray, who was a genuine historian but played fast and loose with primary sources to make them say what she wanted them to.

In summary, a better-than-usual documentary about a difficult subject, mainly remarkable for interviews with some of the giants of the twentieth century witchcraft movement. I have to go now, it's my turn to put the Xanax in the sweets this year.*