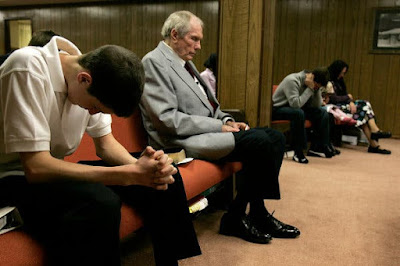 Keith Allen Will Burn in Hell is a 2007 Channel 4 documentary about the Westboro Baptist Church. I was looking for Louis Theroux's series of documentaries about The Most Hated Family in America, but there aren't pirated versions online so you've got Keith Allen instead. I would also recommend an internet documenary called Brainwashed by the Westboro Baptist Church as a complement to this one, but I'm being good and sticking to the TV one. Aren't I good?

The internet reviews for this documentary are universally bad and I honestly can't think why.

This documentary is banging. In fact I think it's the best one on this bizarre church I've seen because it treats WBC as a spectacle to start off with and gradually escalates and this sense of horror creeps over you until you want to throw something at the screen. And it's done in an incredibly low key way, as if it isn't really a very polished documentary. Any old documentary can have the Phelps-Roper family expressing their ridiculous view, but no other I've seen has had them go through their stack of offensive signs and thereby wind up every viewer.

Don't watch this if you have high blood pressure.

Every documentary on WBC of course shows the reaction to their bizarre 'preaching', specifically it shows the members of WBC having to flee with people smashing the windows of their cars, which is of course the natural reaction. Again I would recommend Brainwashed for also including interviews with local Topeka residents saying how the church has screwed up their town because people going there see the protests and run away again.

There is a strange nuance to watching a TV show about the WBC in the aftermath of the disastrous abuse report for the Southern Baptist Convention, because the word Baptist is a difficult one. In this documentary it is said at one point that Fred Phelps embodied the tradition of Southern Baptists and of course we don't have them here. In Britain it usually either means the Baptist Union of Great Britain or several other groups including the Strict and Particular Baptists. I was thoroughly confused until at one point in the documentary called Brainwashed some people who had left the church said that they had no birthdays or Christmas, etc, and it suddenly sounded very familiar. It sounded just like the Puritans, who after they left Britain and became the Pilgrims also decided that other churches were corrupt and in sin.

At this point my head exploded because that sounded *exactly* like the way people were talking about WBC's approach to Christianity which puts it into a horrifying historical context mixed up in the foundation of the USA. I don't personally have a dog in this fight because I was brought up with a mixture of a Methodist Sunday School and Roman Catholicism, and have since drifted so far that I am a neopagan witch, so this doesn't make me uncomfortable because it's almost nothing to do with me. If you were a Christian you would be ****ing furious at this because this is your religion they are claiming to preach. That's the discomfort: sitting there and reflecting that your religion *could* be interpreted to mean what WBC says it does is one hell of an uneasy ride.

Luckily Keith Allen tells us he doesn't have a religion and I have to give him full credit for being the only interviewer I have ever seen argue with the Westboro Baptist Church and make Shirley Phelps-Roper pause. He did this by asking about her son being illegitimate and obviously that's the way to go. She then made the mistake of asking him if he'd ever done a particular sexual act and of course he told her and she didn't like it. I was honestly howling.

My only criticism would be that Allen approached this church without enough research into their specific theological position, which is strongly Calvinistic. I understand that he was coming at it from the point of view of someone with no religious views, which is right, but you would surely make a point of saying, 'These people think only a very specific set of people is saved and everyone else is going to hell and this can't be changed'. Certainly Calvinism changed my life at my Catholic school when I realised that taking a Calvinist position was the perfect way to make any RE lesson collapse in chaos. In fact I claimed to be a Calvinist who believed he was predestined to damnation so I could do what I liked. The teacher wasn't ready for that at all.

Any way, this documentary is great if you like strange religion and arguing. You also don't need any existing theological understanding.