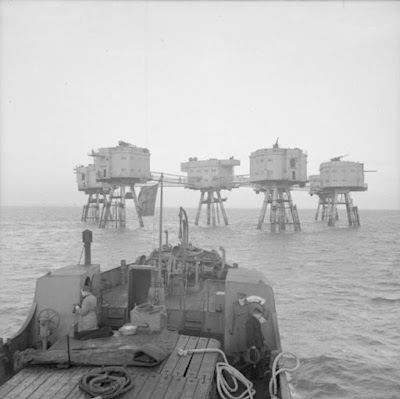 This post is about two documentaries, one of which is TV and the other isn't. I'm doing them both for completeness in case anyone is interested and because they both interest me. So there. Actually the subject has been touched on on the blog before in my post on the Danger Man episode Not So Jolly Roger here.

They are about the sea forts called Maunsell forts (after their designer) built in the sea in strategic places off the coast of Britain during the second world war. The wikipedia page (Here ) is actually very good but the short version is that a man called Guy Maunsell invented several designs of forts which would be phsyically in the sea outside the then limit of British territorial water to stop German forces approaching the land rather than stop them once they got here. They weren't everywhere around the country, they were placed in the Thames estuary to defend London and surrounding areas and outside Liverpool to protect Liverpool. There were two separate designs, the army one which is the one in the illustration and the navy one which is much less fascinating and more scary.

The first documentary is an internet one on Youtube called Why Decaying Sea Forts Were Abandoned in Great Britain ( Here). I've put this one first because it has much more of the history and so logically comes first. It goes into an explanation of the placement of the forts and much detail of what happened. The first thing that surprised me was that he had to comment that fortifications are not exactly unusual in Britain, and phrased this as if it was an explanation for people who didn't know. I'm surprised people wouldn't know! It brought home to me that people see Britain in a way which isn't necessarily the way we see it. So for the purpose of doubt: the place is absolutely littered with old fortifications of various ages. Littered.

I have to say this film is in a series (see the link above) called It's HIstory and I'm going to watch more of them because I'm very impressed with this. I don't know the guy's name but it's an incredibly competent account of the history without drama and then the history of what happened. He even manages to talk about Sealand in a completely flat, objective way. This is the way to do a documentary. It's also an antidote for the rather romantic place these forts hold in the popular imagination: they've defended us in a war, held pirate radio stations after it, and are these huge crumbling fortifications just sitting in the sea. That's a recipe for romantic thinking if there ever was. And even the names of the forts reverberate in an incredible way: Rough Sands, Sunk Head, Knock John, Shivering Sands, and Red Sands. These are like the names of haunted caves in Scooby Doo, don't you think?

The second documentary I'm going to talk about is a show called How These Mysterious Steel Structures Helped Defend Britain ( Here), from a TV show called History Hit , in which Dan Snow meets Dan Foulkes from the project aiming to restore Redsands fort as a museum and hotel. The approach is interestingly different because the history is repeated much more briefly and then we're straight into a visit to one of the seven towers of Red Sands fort.

I'm going to come straight out with it. I've seen various pictures of the interiors of these forts over the years so I wasn't surprised, but if you watch anything it has to be this show. You get a real sensation of what being on a rotting steel and concrete structure in the middle of the sea would be like and it's a wild ride. You have all the romanticism and fascination of the forts but there's something else. At one point they go out on the top of the fort and you can see the state of the metal. And this is where my emotions changed to being really scared, because you can see that whole sections of the metal have just vanished, in probably one of the most inhospitable situations possible. The guy is satisfied that it's safe and has had a full survey but hell would freeze over before you'd get me there. When I've seen pictures of Sealand my thought is how bloody terrifying it would be out in the sea if something went wrong. And your radio didn't work. Most of them originally weren't in British territorial waters so you would have no prospect of help. This has really brought home to me why sailors go off their heads because that is bloody scary.

Foulkes gives a fascinating tour of the tower and what the different parts would have been used for. In some ways this documentary is the opposite of the flat statements of history in the last one, because this one is all human history and life on the fort comes across very clearly. You see graffiti that the soldiers left. You know how they slept in shifts (getting into a bed just vacated by the next shift on, which must have been weird as hell), you hear about the cooking arrangements, you hear about how they got bored. 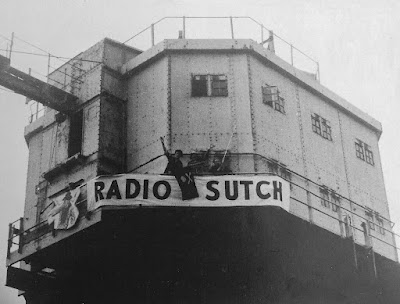 You also get to hear the history of how the legends of independent radio in the 1960s left British territory to make up for the lack of BBC broadcasting, until the law was changed to make it illegal to broadcast to Britain in that way. One of these of course was run by the legendary Screaming Lord Sutch, founder of the Monster Raving Loony Party.

This is an excellent, fascinating documentary. To be honest with the subject matter you'd have to be a real dunce to mess it up but I don't have any criticisms of either of these documentaries.

But I'm missing the best bit of this story featuring intrigue, romance, engineering, distress and British eccentrics. I've mentioned Sealand and this is a self-proclaimed micronation. It is now in British territorial waters but it was in international waters in 1967 when Paddy Bates declared one of the naval style forts a separate nation. The British government were having none of this but also coudldn't really do anything about it so they did the only thing they could do, which was blow up the surrounding towers to prevent repetition and intimidate Bates who just stayed where he was. You can't really say it isn't a real country, they have stamps, a national football team (despite there being nowhere in the country large enough to play football), had an attempted coup by the prime minister in the seventies and even have a national anthem. And it's an absolute BANGER. Ladies and gentlemen, please stand for the national anthem of Sealand: