The Avengers Series 1: The Springers 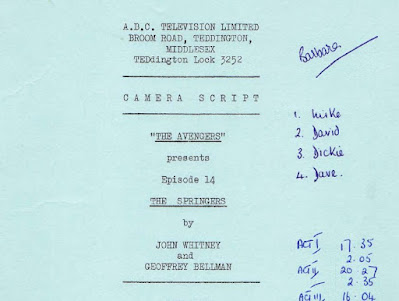 It's been a year since The Avengers made an appearance here and even longer since I did any posts on the missing episodes of Series 1 so it's high time we had some more. This blog post is based on the reconstuction on the Series 6 boxed set, internet commentary and the original script, which can be downloaded here. I have been particuarly won over by Alex Wilcock's review of the Big Finish audio version here.  Can I just say that I looove the way this show has 25 ratings on IMDB, despite the fact it doesn't exist any more and nobody has seen it for sixty years?

In common with many another Avengers fan I have spent my life listening to rumours of what Series 1 is like. Until some episodes surfaced there was a mythology that it wasn't much cop, and so it was a perfectly sensible decision to junk the episodes. There's another mythology that Series 1 is dead gritty in comparison to later series, and to an extent this is true. For example, you can ghet lung cancer just taking the discs out of the box, and a show about a man wanting to avenge his murdered girlfriend is never going to be comfortable. I think it is clearer than it used to be that both of these mythologies are not the full picture and are probably based on faulty memories of the time. In my opinion series one is very mixed and is obviously a show still trying to find its feet. The Springers is the perfect illustration, for me, that series one could be just as barmy as anything the later series offered.

It begins very gritty with the unlikely scenario of Keel being placed in prison as a spy, playing a dodgy doctor, to find out why prisoners keep escaping. If you think carefully about the practicalities of this scenario it is absolutely off the wall. In fact well nigh impossible.

It's absolutely bonkers and I love this. Apart from the sheer impracticality of the plan there is a real element of the later Avengers' use of magical omniscience, because we start with Keel being introduced to his cell without any explanation. We get the explanation from the other prisoners' conversation. This remarkable economy is exactly like the later series. Finally it is also like the later series in that practicalities aside, the plan to have Keel pretend to be a crooked doctor transferred from another prison after escaping, just wouldn't have worked. There is a thing about institutions - both sides of the staff and residents can tell people who are already institutionalised and I just don't think Keel would have been able to give the right impression to the guards and other prisoners. You can tell someone who's been in prison.

If these things weren't enough indication that we are in a prototype of the later world of The Avengers and not simply a gritty police procedural, halfway through it suddenly transpires that the notional escape route from the prison up the canal is connected with the Belport College for Young Ladies! 'What a pleasant thought,' says Steed.

Do I even need to say that Steed turns up at the college in the role of Commander Kenilworthy? You could actually have guessed that even if you've never seen this, read the script, or listened to the Big Finish discs, couldn't you? There are references in the conversation to naval customs, to riding, and other things that clearly indicate we are talking to Our Sort of Person. If this is familiar, this is exactly the sort of person who so often goes off the rails in The Avengers and has to be put right so that the nation can be saved.

The major weakness of the plot is that the crooked prison guard facilitating the escapes turns out to be the only guard we've encountered at all, so you could see this coming. Of course in the world of The Avengers it couldn't possibly be the prison governor who we've also encountered. This is of course the problem with economy, of course.

My absolutely favourite bit is where Steed visits Keel in prison and Keel addresses him as 'dad'.

In summary, this is a series 1 episode where Dr Keel gets his fair share of action and problems, but it has clear indications of the direction of later series of the show.