Sapphire and Steel: The Passenger 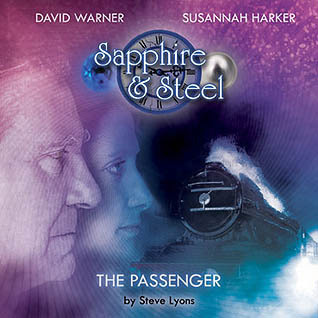 I still feel very bad that I have recently been so critical of Sapphire and Steel's third television assignment, and as you apparently do when you feel as if you've just murdered your grandmother, I need to make it up. The Passenger actually isn't TV (since when did I stay on topic?) but is the first audio Sapphire and Steel adventure that Big Finish released back in 2005. Since it isn't TV and since I'm also aware that it's now rather rare and people may not have easy access to it I'm going to confine myself to one post to blog about it. I would recommend here as an excellent summary of the plot and another review.

The reason I was so critical of Assignment 3 was that it was waaay too complicated and introduced far too many complicating elements while also spending far too much time in emphasising how confusing it was, before resolving the plot with a leg of pork. I'm not writing it off, because if it wasn't worth watching in my opinion it wouldn't be appearing here, but it's not a popular one as far as I can tell.

I have selected The Passenger because it's as if the writer Steve Lyons took the pure essence of Sapphire and Steel and distilled it into a vessel composed of all the ideal scenarios for our heros, and put scary sounds to it. There's a sense in which it actually shows the original show how to do it, and if this sounds like heresy, well I suppose it is. You could argue that it is rather derivative but if you carry on a 25 year old TV show you have to copy it. So there.

The adventure is set on a train on a journey. A train is the exact prop to create a spooky story because of course represent travel, change, transformation. They can represent power, and specifically phallic power entering the tunnel - whatever happens on a journey you won't be the same as before. Of course the original series used a station (although not a train) as a scenario, and in common with that assignment as well as the final one, cleverly there is nothing going on outside the train. It stops periodically to allow new passengers on but the passengers never see the name of the station and the only other indication of an outside is an occasional indicator of the weather. This sensation of there being nothing outside is exactly what we experienced in my favourite of the original series, Assignment 6, set in a petrol station.

The impetus to Time getting out of order is here a copy of Agatha Christie's Murder on the Orient Express, and the technique of having nothing going on outside is akin to the locked room milieu of golden age detective fiction. The use of a book to create the rift in time is akin to the use of photographs in the original TV Assignment 4. This adventure really is drawing in the fans and picking the best bits to do so. This adventure also picks up the feeling of resentment which the show so frequently depends on. If you think of the resentments of the soldiers in Assignment 2, there is a scene here where there are very similar resentments going on, all aimed at one person.

Time is exactly the same frustratingly uncontainable and rather underfined creature it has always been. The standard Sapphire and Steel scenario pertains, where Time is both a thing to be maintained in order and also a scary, bad thing, which here manages to confuse a whole train and turn them against each other. Interestingly the plot uses the clever device where each carriage of the train is set in a different time, which is actually more flexible than a linear progression of time would allow. Time actually fiddles with the plot in the book, which is used as a clever device to show how time is going wrong by the way the plot in the book is interfered with. I did say that this adventure is an example of how to do it.

The moral question here is of negligence, responsibility and blame. The key character blames himself for a disaster years before, and, as you would expect in a situation of stress, there is literally no shortage of blame to go round. This isn't allowed to become oppressive and so I would say that this is still suitable as (not) television for a time of strife.

Rightly, in my opinion, although naturally there is some question as to what or who the people on the train actually are, the impression is mostly that they are clearly ghosts. I like that approach. As I commented in my posts on Assignment 3, we tend to assume that the people in Sapphire and Steel are ghosts because so many of them are dead, however here they actually are. It isn't mentioned explicitly, but it is as if the train references the boat being ferried across thr river Styx by Charon, carrying the souls of the dead.

One advantage that this series has over the original is that there are more characters to explain what is happening. There are various points where the characters, especially Mrs Warburton the housemaid character, provide commentary which is either helpful or deceiving. This is an excellent and illuminating use of the cast, which is relatively large in comparison to most Sapphire and Steel assignments, and it allows multiple possibilities to be explored at once.

Ultimately this adventure gives far more weight to explaining the human motives and techniques used behind the events of the play, which I think is better for we mere mortals. This is a break from the convention of Sapphire and Steel where PJ Hammond really doesn't explain much of anything, which is obviously intentional. My opinion is that this is a more even handed approach to resolving and explaining the plot, although the lack of explanation explains why the original Sapphire and Steel have been discussed at length for decades and become legendary, whereas these adventures aren't quite so legendary.

That isn't a criticism. I don't have a criticism because this is just excallent.

Finally, this is a video recorded last year of a steam train going through the modern day working railway station in Bournville in Birmingham. It is painted in the livery of the London Midland and Scottish Railway, which ceased to exist in 1948. Just imagine if you saw this and weren't expecting it!

Not TV Sapphire and Steel