Sapphire and Steel: Assignment 5 Episodes 3 and 4 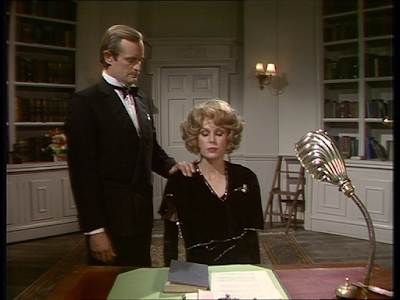 You can read my previous post about this episode here and it's damn good stuff, even if I do say it myself. I'm a bit miffed by the sheer amount of detail and analysis I managed to fit in in that post, but will say what I can. I can only assume that the tolls of age have shot my brain and I can't manage that sort of effort any more.

I am most struck this time that this show is setting us up to expect an Agatha Christie locked room mystery, specifically And Then There Were None, and no episode does it better than this one, right from its recap of the discovery of the body.

I would say that the episode then turns the detective fiction expectations on their head and makes it something quite different by the repeated hints that things are wrong, and, of course, that Time is out of sync.

I would say that, but I think this whole Sapphire and Steel assignment could be seen as the series's characteristic twist on And Then There Were None. At various points this is made explicit by similarities between the two stories. However the point of And Then There Were None is that we don't know what's happening and are intensely confused most of the time.

Sound familiar to anyone who's ever seen Sapphire and Steel?

Specifically, And Then There Were None is about a judge who takes it into his own hands to punish a selection of people who he thinks are criminals who have escaped punishment because of the legal standards of the day. From here on the love lives and relationships of the cast become more complicated and the respectable facade crumbles, as the human motives, emotions and errors take centre stage in this episode. The twist on a classic detective story is that the 'judge' doing the murdering here is, of course, Time, which literally turns the plot of And Then There Were None on its head. In the novel you know that the murdering avenger is one of the guests and must be human: here it could be anything including one of the guests, which adds an extra layer of doubt. The fear is built up by repeated references to the fashionable supernatural things of the sventies, including ley lines and poltergeists.

I think this mixture of the mysterious Time side and the human side built on the suggestion of an Agatha Christie novel, make this an unusually layered and complex mystery. In fact sometimes it's my favourite.

You can see my original post about this episode here, in which I see I wrote that I thought the Christie-style mystery was a deliberate distraction (for the cast, and us of course) from the real business of the time disturbance.

The customary conversation where the house guests try to work out who has done the murder, leads into revelations of the fissures in the relationships of the characters. And the stress does actually show. Who on earth starts singing Ten green bottles in the middle of murder? My absolutely favourite thing watching the assignment this time, is the way Sapphire and Steel take over the library as their base. I think the fact that they do this and nobody notices for a time, is part of the number of odd behaviours in this episode, which I suspect is again a deliberate ploy to reinforce that everything is not OK. It could even be that the fractured relationships of the people could have been what prompted Time to look here for an opportunity to end the world.

I am more interested this time than previously, in the reaction of the house guests to Sapphire and Steel's presence in their midst. It moves from hostility to acceptance of them as the right people to investigate what the hell is going on in their house. So much that happens in this assignment is extraordinary - and I'm not even talking about Time invading the house and taking it back in time, I mean the reaction of the household and guests to what happens. They try to rationalise events to themselves and it is interesting that although they do that they are still hostile towards Miles and Virginia, reflecting a constant undercurrent of hostility towards Sapphire and Steel in every assignment, from the people they help.

Of course the reason everyone is behaving in such a deranged way is that this isn't a straightforward murder mystery. The heavy clue is when Sapphire says that the knife which was the murder weapon wasn't used by a living soul before trying to stab herself with it. This sequence moves the suspected avenging force from being possibly one of the guests to being in the house, again taking the Christie plot and making it even more scary.

Meanwhile Felicity Mullrine says that she thinks what's going on is being caused by a 'dear little poltergeist'. Speaking as one who is actually aspiring to be a poltergeist when I'm dead I can promise that if anyone every describes me as dear or little there will be a manifestation like nobody has ever seen.

I think we can truthfully say that Mullvine International must have been a living nightmare to work at!