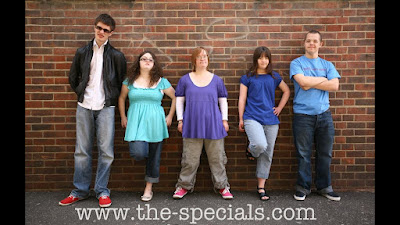 Since my last post I've been sounding like a sweary version of Robin (holy nuclear codes, Batman!) and was going to do a Batman post but have added Batman to my list of shows which are well nigh impossible to blog about, for reasons which I'm not entirely sure about. So anyway, instead a post about The Specials, a show which started off as an internet streaming thing and moved to TV. You can see the whole thing for free on their youtube channel here.

It's about five adults with learning disabilities, who all went to the same school, became friends, and decided that they wanted to live together independently in a house. The logistics of doing this with their care needs turned out to be incredibly difficult and ultimately the parents of one of them had to set up a company to run the house. And this is of course the point, because if you don't have care needs or a learning disability, and you want to share a house, you just find a place and work out the finances and so on between you. It's rather soft pedalled but there is a constant undercurrent of the more organisational difficulties that people suffer.

Otherwise, seriously this is one of those times where I will just say please watch this show instead of reading my ramblings. It's an absolute delight, and has won award after award. The key is, as in anything person-centred, it's a show about five people, whose personalities come across loud and clear and you would definitely want to know them. As far as I can tell the housemates would have what would be characterised as mild learning disabilities, and yet still obviously qualified for special school, so I suppose it's entirely possible that some people have never met anyone with a learning disability, or even if you have, this show is a great way to see what their lives are like. The five housemates' voices are prioritised throughout, although you do get the odd fascinating glimpse of family members talking about them when they're not present and interactions with support workers.

I am going to come clean and say that although I'm a former mental health nurse I have a very limited knowledge of learning disabilities and in fact have often wondered what it would be like to have one. This is as close as I've got because you see the housemates' real lives, and they express their real thoughts.

It isn't always rosy by any stretch of the imagination.

In one episode housemates Lewis and Megan who are already boyfriend and girlfriend go on a date. To say it goes horribly wrong would be something of an understatement. I noticed in several places in the show that people comment that Lewis doesn't put himself forward, doesn't interact with others, has to be encouraged to talk to people, and is a complete contrast to complete ladies' man Sam who spends the entire series in search of a girlfriend and is straight in there. Watching Lewis and Megan, it's as if he's not engaging with her. For example in the restaurant they go to he doesn't sit facing her and doesn't talk to her. Even though his biography on Wikipedia says he has Williams syndrome (which is associated with being dead sociable) and doesn't mention autism, frankly it's autism central with the way he seems (I say seems because of course we don't know what's going on in his head) not to be engaging her at all. Basically if you went on a date like that you would think it was a disaster but what is so very sweet is the sheer kindness with which she deals with this (and in fact one of the things you notice most in the whole series, even when you see disagreements, is how kind they all are to each other), but she is clearly mortified. It's also noticeable how when she dumps him shortly afterwards he says that he is upset, clearly doesn't look right, but the way he looks doesn't quite fit what you would expect for the experience of being dumped. Elsewhere in the programme I was struck at how the housemates and support staff put things Lewis did down to his shyness and rightly made allowances for this as a personality trait. It's even more noteworthy that they negotiate the tricky situation of this happening between two people sharing a house. I'm so jealous. I would love to meet a bunch of people who make allowances for me as I am but unfortunately they keep calling the police.

Now I'm all for people living as suits them best (unless you're wrong, and I'll be the judge of that), and I have complete sympathy for bothy parties. I think in the twenty-first century we have a better idea that people have different needs and expectations and it was very apparent that unfortunately Lewis was happy with the relationship they had but Megan wasn't. For example at one point she comments that he didn't like the idea of kissing. We were seeing two young adults working out what they wanted their lives and relationships to look like. In other words exactly what you do do around the age of twenty!

And then it struck me that, apart from the addition of extra support, this is exactly how it would work for anyone else and this is how it is supposed to work. So what the show was doing was showing people with learning disabilities actually living the lives they wanted, with the support they needed to do it. Exactly the way it should be. The show showed what they were thinking and portrayed them as people.

The other place where real difficulties struck me was Lucy's problems in her job (judging by the uniform I would guess this was a paid job rather than voluntary) in a charity shop. She is very upset because her parents are separated and it seems like the shop has food available for the staff. Unfortunately she's started eating all of it. We see people saying to her that if she keeps on like that she'll lose the job and she says 'I will do it my way' (in other words, the phrase that always goes before a fall). This bit didn't strike me so well. One of the things I do know about people with learning disabilities is that they can find it difficult to deal with stress or distress, and even when mentally ill this tends to present as either an increase in challenging behaviour or decrease in normal functioning. There is an interview with her where she is visibly distressed and saying she can't help herself. Nothing wildly unusual about comfort eating, but it seems like she doesn't have the impulse control to stop. This isn't difficult. You've got an employee with a learning disability and have to make adjustments for her. So change how people (not just her) access the snacks temporarily so they still get them and give her some love as well. The shop doesn't come scross very well because it looks like they haven't made the adjustments they could for one person. I actually found this quite chilling, because you got the impression that she could actually have lost that job because she wasn't coping well with her parents separating.

Given what I've already said you would expect that in addition to activities solely geared to people with learning disabilities the housemates would be involved in all sorts of things (I have searched in the depths of my memory from my student nurse days and vaguely recollect this being called normalisation), but what I love is the nature of what they do. In true Brighton style they go to see the Lady Boys of Bangkok, and I was impressed with how sophisticated this was. I was even more impressed with the support worker and the other housemantes repeatedly telling Sam that he could claim that they ladies were gorgeous all he liked, they weren't ladies. Very impressed. Many people of supposedly average intelligence can't cope with that one.

I'm going to have to say something else which springs to mind which may seem curmudgeonly at best, and may be because watching this as a former health professional I'm getting a few impressions that probably weren't intended. I think watching The Specials may give an unrealistic impression of what life would be like in the UK for most people with a learning disability. These five people happened to have relatives who had the commitment and interest to go through endless rounds of funding applications and battles, ultimately having to set up their own company to manage the apparently simple matter of five adults who wanted to like together doing so. That they did this is obviously great, but I think probably most people in their position end up in group homes with housemates not of their choice. It's great that they did this, but it's the result of having articulate parents who are willing to do it. The housemates' families are also from the more prosperous south east of the country, and whatever you may say, you get more opportunities there than you would in the north of the country. The house they live in is in sunny Brighton, which is also an expensive area. It's totally great that they got their dream and line in such a nice house, but it's a dream which may not be available to many people, let alone those with learning disabilities and inarticulate parents. I have also read a comment that they hand picked the support workers from people they already knew, which again is great, but may give an unrealistic expectation of what most people with care needs actually get. It's a wonderful example of what life and care can be like if you have a learning disability but may give a false impression of what is usually available or how much work would be required to get what they've got.

As for the show itself, it would be churlish to criticise because the remarkable achievement of opening up these people's worlds to the internet can only be praised. Just watch this show!