Sapphire and Steel: Assignment 3 Episodes 2 and 3 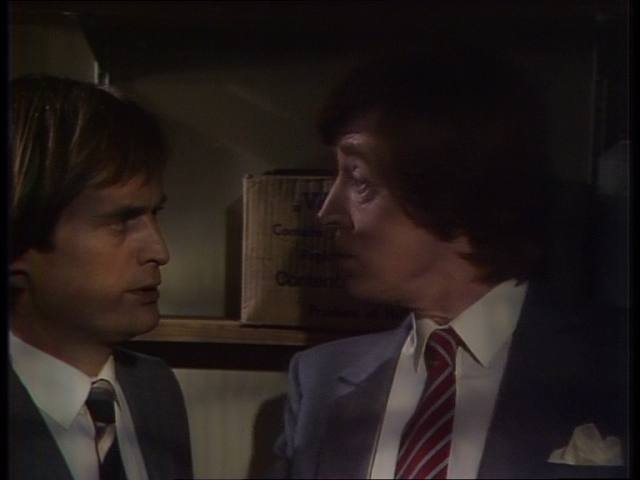 Episode 2: In which everyone gets thoroughly confused

If you read up on what people think of this episode you tend to get lots of comments about how seeing Steel sabotaging a lift isn't the most exciting television ever. And of course that would be right.

But I think this episode's main function is to underline with the subtlety of a sledgehammer how everything is wrong with time here, how everyone is out of kilter, and nobody is thinking straight. The wife tells the husband that she's worried about her thoughts. Let me tell you, when your spouse says that to you the only possible response is, are you taking your medication. Steel thinks he's been attacked by the swan/pillow, but finds he hasn't. It's never good when you start perceiving things that may well not be happening. Meanwhile the baby goes through puberty about four times during the episode, so to be fair he's probably the most confused of them all.

I think this is the point of the lift sequence. I think there's a point to that sequence which is lost because it goes on too long. I don't really know anything about lifts, but I'm fairly sure that if you could pull out the wires far enough to tie them in a knot it would stop the whole thing working. I'm also sure that most people would not get into a lift making the noises that one does. So I think the impossibility of what he is doing as well as the impossiblity of it deceiving the other residents of the block that everything is normal, as Steel wants it to, are actually intended to indicate that he's not thinking straight.

Of course you would be quite right if you were to tell me that that is a ridiculous way to make that point, and I'm not going to shy away from the fact that I think this episode is deeply flawed in all sorts of ways. You just can't have everybody in a show confused at once and heap on the confusion on the viewers, because it ends up being too much and ends up in the assigment being considered a weak one, which is exactly what has happened with this Sapphire and Steel.

I am going to interpret PJ Hammond's use of Sapphire towards the end of this episode as being intended to mean that she is the one person who anchors us in the relentless confusion he has built up. She identifies the time crystal in the experimental pod, and tends to be the one who interprets things for Steel and of course for us. The way she disappears would I imagine be intended to leave us with some explanation but ensure we feel thoroughly bereft at the end. Unfortunately I think Sapphire's role is too small to make this apparent, and the fact that it is Joanna Lumley doing it means that her role is submerged online in a chorus of men saying how hot she looks. So what we needed was less confusion, more explanation, and probably less lift.

To cut this short: I think if you come out of this episode feeling thoroughly confused, it's worked and that is the intended effect, although it is rather flawed.

Episode 3: In which Sapphire and Steel's working relationship gets complicated

We start with a surprisingly bereft Steel without Sapphire.

We get a fascinating glimpse of Steel being more human than he normally is, imploring Sapphire to tell him where she is. This is actually one of the most touching bits in the whole series. The character development then proceeds with the introduction of Silver to help this case. This introduction complicates the dynamics in the show and various ideas have been put forward about what is going on here, including professional jealousy, Silver being gay coded and making Steel uncomfortable (at one point they are actually in the closet together), Steel and Silver being counterparts of each other, and Silver having the hots for Sapphire. PJ Hammond's tendency not to explain his shows means all of these have been suggested by fans. However you interpret it, Silver is now our explainer for the show which he does magnificently, in fact pretty much stepping easily into Sapphire's shoes.

The similarity of Silver and Steel's suits has often been commented on, and is the reason they are seen as being competitive versions of the same thing. I am interested that the suits aren't in the latest fashion for the end of the seventies/beginning of the eighties, and in fact you could wear them today without drawing too much attention or being asked if they are vintage. It strikes me that significantly in a show which is literally all about time you could describe the suits as timeless. I am also interested that when the baby abruptly grows up he finds another similar suit to put on (although brown, instead of grey), which may appear to put him in the timeless class with Steel and Silver and underline that time is all wrong. The boy's dad, in the manner of the time, wears a polo neck in a beige colour, because they have made an effort to dress for the period they were going to. He must, however, be the owner of the suit the grown up baby puts on.

I was going to list a few things which I thought aren't quite right with this episode but I'm finding that every time I write them down I start thinking that they are probably intentional and integral parts of the plot. So perhaps suffcie it to say that the feeling of unease continues and it isn't clear the extent to which this is orchestrated by PJ Hammond. In this episode there isn't an explanation given for why Sapphire have ended up in one of the other pods in the experiment, although it obviously serves a narrative purpose to explain that the other people in the experiment have dies, because we would never have found out through the communication device.

Remember, parents, if your pillows aren't in the right time, you might wake up one day and find your baby is suddenly about 25. God, I love this show.