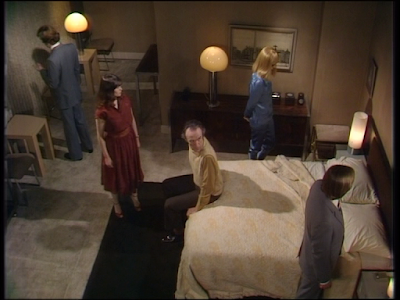 Episode 6: In which the mystery is resolved with a leg of pork

Warning: This post contains spoilers for the resolution of this assignment.

Not to beat about the bush here, I'm going to try to be as gentle as I can but I honestly think the assignment falls on its face with this episode, largely because the complexities that have been invoked already would be formidably difficult to resolve tidily for anyone.

Two specific parts seem to me to fall particularly flat. The first is the scene where Eldred won't access the bedroom of the other study pod. He gives as the reason that it has taken humanity that long to evolve to the point of having enough privacy and decency not to go into someone else's bedroom. We have gained certain moral standards, he says. This falls completely flat because it's complete nonsense. Except in situations of complete poverty you don't randomly go into someone else's bedroom. I also suspect that at times and situations in the past, such as middle class Victorian morality, there would have been a far greater sense of modesty and privacy, so they're just plain wrong here. It's bad enough that Time is out of sync without Sapphire and Steel getting involved.

The other part where it really falls flat is the scene where Steel does the thing with the leg of pork to solve the situation by feeding the thing. If you hadn't seen this final episode would you have expected it to be resolved like that? Of course you wouldn't. This is because, as I have already indicated, in my opinion the whole thread about animals and vivsection is unnecessary to the plot. In fact I think it's derailed the ending rather.

It's a quibble and may just be my own personal dislike, but I gain the impression that Eldred (mostly) and (to a lesser extent) Rothwyn are probably not ideally chosen for an experiment in living in another time. I would have thought that a high level of adaptability and problem solving would be required if you're getting sent to another time. After all you don't really know what's going to happen. Instead Eldred shows himself as rather rigidly fixed in their own time and finds it difficult to adapt to an emergency situation. It's something that adds another layer of implausibility.

I have been trying to think how I would have preferred this adventure to go. My idea is that there is way too much stuff complicating the plot, so I would probably have wanted to get rid of the animal thing, and certainly get rid of the bits about the dynamics between Sapphire, Steel and Silver. The show also has a LOT of comings and goings with people disappearing and you never ever know what age the baby is going to be, so probably a lot of that could have done with being reduced. I think a more linear plot where the only problem is that time is out of synch could have made this a more successful Sapphire and Steel. The thing which has caused the disturbance in time could be the simple fact of the people moving through time, without the necessity of having pieces of machine and animal working against them. I do have to say that I have formed the impression that this assignment was a good story that may have been felt to be too slight for a six parter and so has been padded out with endless bells and whistles that have screwed it up.

At this point I honestly feel as if I have shot my own grandmother in the face.

Conversely, I am also very conscious that I wouldn't go to the stake for the view I've expressed above because much of what makes Sapphire and Steel a cult TV show is that nobody knows what is going on really and PJ Hammond makes a point of never explaining. If you get everything explained you don't still have the fans chewing it over online forty years later.

My favourite bit is the bit where Steel invites the experimenters to kill themselves as the inhabitants of the other pods have. That's the Steel we all know and love, just saying what he's thinking without any regard for human sensibilities.

So all together, a Sapphire and Steel assignment which I definitely think you should watch and I will watch again (or it wouldn't appear here), but can be seen as either ridiculously confusing or a mystifying piece of expert writing.