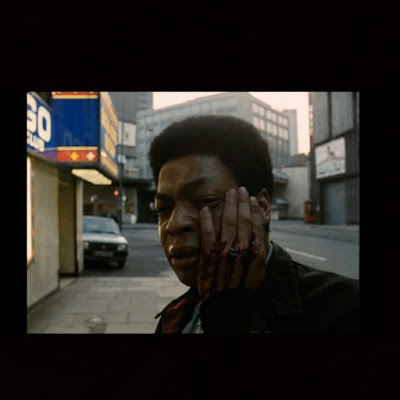 This series of posts about TV related in some way to Birmingham prods me to blog about The Firm (by Alan Clarke for the Screen Two series) which I will happily admit I have been wanting to write about but have been rather avoiding. The connection with Birmingham is simply a scene set in the city. Strangely for a city with five universities, three cathedrals (and there used to be an additional Liberal Catholic pro-cathedral) and three rivers, Birmingham only has one football team, Birmimgham City Football Club, which had its start in the winter of 1875, when the choir cricket team of Holy Trinity church Bordesley thought they would try the new sport of Association Football. BCFC has or had a firm of hooligans called Zulus, which started as a derogatory name for them because of their multicultural nature.

In a sense there is very little to be said about this show because the internet is replete with reviews and commentary, so I will just say whatever happens to go through my mind about it. In other words, just like every other blog post here. I am making an effort to say more of what is in my mind rather than let it fester so later in this post I will say the thing which has stopped me writing about this show because it sounds silly even to me.

There is quite a lot of fancy play writing about this which isn't apparent when you read the blurb. The first thing is of course that despite being a TV programme supposedly about football hooligans, you see vanishingly little football, so it makes the point that football hooliganism isn't about football at all. At the end of the play there is a bit where the cast break the fourth wall and start chanting which is directed at the camera crew who are visible. Every review I have read understands this, correctly I think, to indicate that the events of the play are not simply fiction but happen in the real world. I'm a bit ambivalent about this technique being used in an otherwise linear fictional narrative, which everybody knew was inspired by real events.

Another major feature is the programme's setting in the eighties in Thatcher's Britain. There is an aura of prosperity and opportunity which has largely vanished now. In fact this is the source of amajor criticism to my mind - you will read in all the reviews that the show documents the move of football hooliganism from the working class to the middle class. Aside from Oldman's character being an estate agent, I literally cannot see any indication in this that any character isn't working class, although I suppose it depends on where you're coming from. I do wonder whether the choice of estate agent as a profession was deliberate because it is a profession of opportunity but in the eighties was completely unregulated and this was of course the source for the popular idea of estate agents being cowboys and dodgy. So it is possible that it misses the mark somewhat in the middle class theme, or else that Bex is intended to be a more complex character and the reviews on the internet are seeing the middle class setting from a solely working class perspective.

I keep wondering about what would motivate Sue, Bex's wife to be with him. Far from being a catch, he's a shit. She knows he's a violent hooligan yet is still with him and has a child by him. He isn't violent or coercive towards her in the programme, and I think this aspect would hang together better if he was. This is supposed to be set in an era of prosperity and I feel like she could have left him. Especially with the worry, and then when their child hurts himself with a weapon Bex has left lying around. I'm honestly not sure whether I'm doing my usual thing of worrying a bone which is relatively minor and certain not the point of the plot, but this bugs me.

The scenes in Birmingham are gorgeous because they are rightly set in the old concrete and brutal market area and it's like Birmingham puts on a special effort to be Birmingham for the occasion. There are screenshots and current pictures showing how if you blink the whole of Birmingham is demolished before you notice, here.

The thing which has been bugging me about this show and has stopped me blogging about it because it sounds silly takes place in the vandalism scene a few minutes in. While the firm are actually playing football, the rival firm is vandalising Bex's car, their clubhouse, and their clothes with blue paint and screwdrivers. Perhaps I should stress that they are using actual screwdrivers and not the tool locally referred to as a Birmingham screwdriver, which is what everyone else who speaks English calls a hammer! It takes seconds but there is a scene in the changing room where they spray blue paint over three pairs of underpants which are lined up on the bench. I don't know whether painting the opposing firm's pants (presumably with the colours of your own team) is a common thing in football hooliganism. Presumably there's an element of emasculation, dominance, setting up your territory in the opponent's monst intimate area using an item of clothing which would be next to the genitals, and forcing them to go home with none on because they've been trashed. And this next bit is going to sound even madder than that. Are we expected to believe that men playing football lay out their underwear in a neat line like that? It's utterly unrealistic. And to make it even worse they could have washed them first to get rid of the creases out of the packet. So we have a line of underwear, lined up on display all on their own with no other clothes in a way which you wouldn't even find in a shop, and they're brand new. Reality has gone out of the window.

But then you don't come here for sensible commentary, do you.

This post has been certified completely objective and free of bias, by the management of Birmingham City Football Club. So go and watch the show or else.