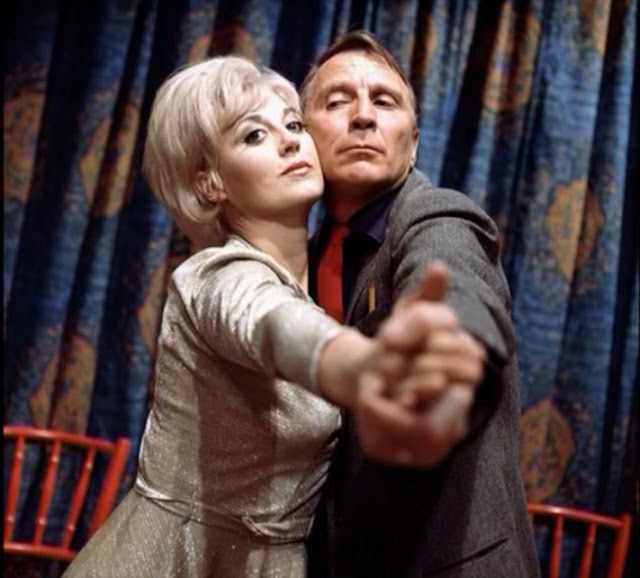 This is the only remaining episode of the third series of Public Eye, and the last episode set during Marker's sojourn in Birmingham for me to blog about here.

It is intended to be a depiction of the ins and outs of a particular relationship, however what most strikes me about it is the depiction of Marker's work. To come straight out with it, if  I was professionally approached by both a husband and a wife who just plain will not talk to each other, I would find myself very hard pressed not to slap them. The husband can't ask his wife why she appears nude in a photograph which has appeared in a photography competition in the library where he is chief librarian. The wife can't ask her husband what he knows about this and can't tell him that she has been blackmailed for absurdly small amounts for years.

Most of the commentary on the internet focuses on the ins and outs of this relationship between Ainsworth and his young, beautiful, French wife Marie. In quite a go ahead way for the early sixties their relationship is contrasted with the life of Ingleby, the deputy librarian. Marker goes to see him at his flat, where he is dressed in a dressing gown and expecting a much older man to visit. In the euphemism of the time he's pretty obviously gay, but you have to wonder whether he's also on the game, since he seems to have a lot of expensive stuff. Incidentally my resolution to say what is in my mind more is already going wrong because I was talking to a guy the other day whose mother threw him out of the house when he came out to her at fifteen and ironically he had to prostitute himself to make a living. I apologised for what I called his mother. Can I just say how much I love the way Marker says 'Call me Myrtle' to Ingleby, which again is a heavy, unsubtle hint. I suppose as a private eye you would soon know how to move among all sorts of subcultures. Ingleby does actually address Marker as Myrtle when they next meet, which set me off howling.

I think the point of the suggestion that Ingleby might be gay, is that even if he is taking nude photos of Mrs Ainsworth, he wouldn't be sexually interested in her so Ainsworth's worries are also rather pointless. The sheer lack of necessity for most of the angst in this episode is soul destroying.

Anyway, apart from the relationships, I have found this episode makes me focus more on Marker's work. He's working for the husband, rather than the wife, but it is striking that what they really need to do is sit down together and have it out, but neither of them can. Even the thought of living in that relationship makes me want to scream, and it dominates most of the episode rather than the actual criminal matter which is cleared up towards the end. It brings home that most of Marker's work is not apparently the work he's supposed to do. It's sleazy, and frankly unnecessary. He's doing work which even he can see isn't really a job for him, and so rather comes across as making money out of these people's inadequacy. At one point he even talks with Ainsworth about what he thinks of his wife, and this is really more for a counsellor or marriage guidance to my mind. It almost feels as if he's taking advantage of people because of their own inadequacies.

What isn't wonderful is the complete dog's dinner, in the manner of the time, the show has managed to make of the Birmingham accent. It is widely commented that there wouldn't have been many actors who could either do it naturally or learn it at the time - this is of course true but there are episodes even within Public Eye where it is done better, for example, Don't Forget You're Mine. The girl in the photography shop has a good go, and it rather comes across as if she's doing the accent from reading instructions in a book rather than ever actually having met anyone who spoke it proper. Daphne Heard makes a magnificent appearance as a shopkeeper who takes messages. Unfortunately she addresses Marker as Duck. I don't know where she thinks Birmingham is, but it's certainly not in the Potteries, where you would expect to be addressed as Duck. In Birmingham the equivalent is Bab. Honestly, you wonder what they learn in these drama schools.

I'm not sure why it's called The Bromsgrove Venus: it's never explicitly said whether the events take place in the nearby Worcestershire town or whether Ainsworth lives there. The Palmerston Road address in the B1 postcode appears to be fictional and the depiction in the show does not look like B1.

My absolute favourite thing about it: the fact the photo is called Lady with a Bottom.

So in all, a nuanced episode with depths of relationships and conflict. Just don't learn to speak from it bab.