Birmingham on TV: The One Game

A friend recently had IT trouble and lost access to years of photographs and notes on his interest in urban exploration. He was bemoaning that he didn't understand the explanation of what had happened given to him by the IT person who was dealing with it. I gave my jaundiced opinion that if you can't explain something in a way that a non-specialist will understand what is happening, you don't understand it yourself.

Of course you already know that I'm saying that as the prelude to saying that I have had some difficulty understanding this show. Not for the first time blogging has forced me to get my head round a show which I have been allowing to wash over me, so that I can talk about it here and allow for any readers who haven't watched the show. If you've watched it you probably understand it better than me anyway, it's HUGELY ambitious and naturally I tend to get distracted by the sights of eighties Birmingham.

The One Game is a mini series of four episodes about a businessman, Nick Thorne, who runs a successful computer and other games business. He founded the company with another man, known only as Magnus, who he then forced out of the business when it became successful. Magnus forces Thorne into a succession of real-life games, intially by making the company's assets disappear wih the help of a hacker and then abducting his wife, and these games take place over a long weekend, each day represented by one of the show's four episodes. Thorne finds lots of clues, has chance encounters, has his life threatened multiple times, and really doesn't know who to trust. I would recommend this page as an excellent summary of each episode and so I'm not going to repeat what is there and instead try to deal with the show thematically rather than chronologically. You can view it on several levels, needless to say.

1. There is the flat adventure story. It isn't really a mystery because we know who's behind the games all along, although we are taken in by several other characters, however the sense of adventure is very real because Thorne is genuinely repeatedly threatened and we don't know what is coming next.

2. You could watch this as a crime series, if you're into those sorts of shows where a total sociopath does twisted things to people. Obviously here that means treating Thorne to a cat and mouse game, while holding his ex wife hostage.

3. There is a whole level of Arthurian mythology involved in the story. I personally find Arthurian mythology difficult to get my head round, and here it is luckily without any notional nationalistic or jingoistic vibe.The idea is that it was based on what would have happened if after setting up the kingdom, King Arthur had told Merlin to go away, and what could have happened as a result. The show is replete with Arthurian imagery and apparently it really wove a magic spell on the team and during production they really got caught up in the mystery and mythology. I have read several reviews online of this show by people who saw it the first time and it started a life long interest in Arthurian legend for them.

4. The Lord of the Rings is mentioned as an inspiration to Thorne and Magnus in the early days of their partnership. I am not familiar with the LOTR mythology (what Oxford don starts a book with the words 'It was Bilgo Baggins's eleventy-seventh birthday', anyway?) so can't speak for whether this mythology is also present.

5. It is rather soft-pedalled, but there is a rather moral element to the story: I suppose setting it in true eighties context Thorne can be seen as a ruthless yuppie who has no conscience and doesn't care who he screws over. However, like everything with this show it isn't a simple morality tale, because later in the show it is apparent that Magnus can also lie for England, and kidnapping people isn't really cricket. So even though we are set up to root for Thorne, actualy both business partners were utter shits really. And of course there is the aspect of treating real life as a game, and it's always a red flag when you do that.

6. I haven't really tried to, but I suspect you could even read this series through the lens of James Frazer's theory of the sacrificed king, or else the oak and holly kings (represented by Magnus and Thorne, obviously) conflict so dominant in many modern Pagan traditions.

7. Finally there is the very strong element of surrealism, which honestly may mean it's best to understand this show as some weird shit. For example in part 2, Thorne drives (apparently from Birmingham, although while the setting is obviously Birmingham, names on signs are changed so it probably isn't intended to be Birmingham) to an unnamed deserted village. The village is bizarre to start off with, because the street of terraced houses are all well maintained and yet completely empty. There is graffiti in one of the houses saying both 'God save the Queen' and 'Brits out' which would suggest the location would be Northern Ireland, although no other possible reference to Northern Ireland is made in the rest of the show. There he is met by a number of gun men who try to kill him, which is the least surreal bit. The man he also meets with a white rabbit in a box is also very strange, and unless I'm much mistaken, the rabbit is never explained. Oh, and of course Lord Maine, who Thorne's finance director engages to try to help, just happens to be a civil war re-enactor who we see in full kit. Because obviously train spotting would be too boring a hobby. This show is proper weird.

On this viewing I have found that I have appreciated it best as a straightforward adventure with surreal elements. Even though I have seen all the way through the show several times, I am finding that approaching it like that is maintaining my interest. I have read reviews which describe the ending as weak. Personally I don't agree with that assessment - I can see why you would see it as unsatisfying, though. It becomes apparent that Magnus has been playing games on a lot of people, but the show first gives Thorne the impression that Magnus's game (which it is revealed was run on a very sick and twisted basis) is resolved, and then cleverly gives us the impression that that resolution may not be true. It would be well nigh impossible to manage a simple conclusion to such a complex plot, and honestly I think this is the best way to end it.

Of course you've already picked up on the only real problem with this show, which is that it is wildly ambitious, very complicated, and thus really requires concentrated viewing. This may not of course be a bad thing. Unfortunately I don't have the booklet which comes with the DVD because my copy was second hand, but apparently it includes loads of information helpful to appreciating this show.

There are a couple of personal highlights to the wonderful Birmingham locations: 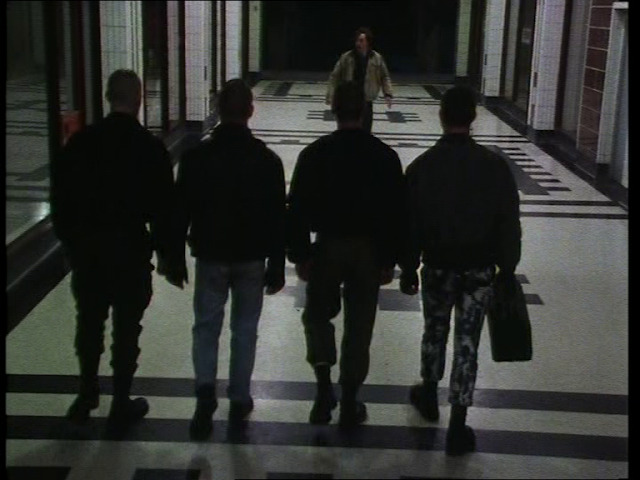 My personal favourite is a scene where Thorne is threatened by a number of skinheads before his ex-wife is kidnapped in a shopping centre. This was filmed in the since-demolished Fletcher's Walk shopping centre in the Paradise area of the city centre. You just know, don't you, that like everywhere else ever called Paradise the place was a train wreck? And part of the doomed sixties civic centre development of that area which was never finished and has since been demolished. It was also reputed to be as haunted as anything, with all sorts of tales of things moving around or going missing in locked shops.

Some scenes take place at Highbury Hall, the residence of Joseph Chamberlain, MP for Birmingham, a Unitarian self-made man, who was Lord Mayor (1873 to 1876) and MP for BIrmingham. Incidentally my favourite Birmingham ghost story of all (this show seems to have picked the places with a proper Brummie mythology connection) is about the Lord Mayor's office in the Council House. The staff keep going in there and finding the mayor sitting behind the desk. The only trouble is that they don't find the current one, they find Joseph Chamberlain! Of side note it is possible that Highbury was the inspiration for the house plan in the game Cluedo, another Birmingham invention.

So in summary, despite the way I keep getting distracted by the sights of eighties Birmingham, this is an excellent and layered TV show, which suffers rather because of its ambitious sweep and an ending which may be considered unsatisfactory. Well worth watching, but with attention.

This post concludes my series of posts about TV related in some way to Birmingham. When I did the orphaned episodes series of posts I had about half a dozen shows I wanted to write about but it ended up rather getting out of hand. These shows have gone the other way - I had a long list of shows to start off with, but on watching them have found that I didn't have a great deal to say about them.

Of non-TV viewing set in Birmingham, I'm not going to write about it here but I would highly recommend Tony Garnett's Prostitute ( the year is given as 1980 by IMDB but as 1981 by the BFI) about a prostitute which features quite a lot of the Balsall Heath area. It was famous in the sixties as containing 'the wickedest street in England' and was indeed the red light district for many years. It's a film which pulls literally no punches but again manages to catch the authentic Birmingham feel which is so difficult for film makers to do.

80s TV Birmingham on TV The One Game