Real gangsters this time, rather than fictional ones. I was delighted to find this documentary about the two main gangs in Birmingham (the Johnsons and the Burger Bar Boys) in the twenty first century, because I wanted to opine about documentaries about gangs and was afraid I was going to have to use the flawed One Mile Away on the same subject (which is still well worth watching in conjunction with this one but is widely criticised for various things which will become apparent.

I do get that it's very difficult for a documentary maker to write about a subject which is still in the making and which involves two completely closed groups who are obviously wary of appearing on TV. In fact even writing this post has given me endless trouble so I'm feeling more sympathetic than I was at the beginning!

The real difficulty for the documentary maker over these two gangs is that there isn't an apparent reason for them. Both documentaries ask members of both gangs what it's all about and significantly are greeted with a puzzled silence rather than a concealing silence. In Gangland UK one of the gangsters gives the very sad explanation that gang members feel they have to have things like trainers to give themselves some sense of identity or self worth. Gangland UK has a better insight into the gangsters' background of poverty and alienation. But it's the maker of One Mile Away who gives the best insight into how the immediate beef started:

'The most reliable story I heard about the Burgers and Johnsons was that they had all been friends in their teens, but the Burgers mostly hung around by a Burger Bar at the top of the Soho Road and the Johnsons would meet outside Johnson’s Fish Bar. Then two men, Captain and Soldier, fought over a woman and one of them was killed. And that’s how it started but as the death toll mounted nobody remembered the first death because they were and still are, busy avenging the next one.' Source

Gangland UK has also been better to identify the function of the gangs, something that the police clearly didn't understand, since it describes how an early police crackdown on gang activity resulted in an increase in gang activity and violence - something which they had seemingly not been able to forsee.

Neither documentary even touches on the elephant in the room, which is that every member of the gangs they talk to is black. I think there were some white members as well, but they don't appear. One Mile Apart's strength is that it gives a voice to the people featured, and sure emough the subjects of race, poverty, exclusion and so on, keep arising but are never really explicitly brought out - it is very apparent that these are the things which are really going on for the gang members and are the driving factors. At one point one of the gang members says that normally if someone is murdered there is an outcry but if it's a member of his community it's just normal. He doesn't say whether this is the black community, the gang world, or the community he lives in in north Birmingham. How is it even possible to have someone say that in a documentary and not leap on it? This failure to talk about the question of race means there is a lack of nuance to both documentaries and they could both be seen by gammons watching them as indictments of racist perceptions that black people are just violent. It is very apparent to the local eye that when the Handsworth carnival (at which there is a shooting) is depicted there are also a lot of respectable, church going and other black people there, but this side of the black community and life in the north of the city isn't mentioned.

Both documentaries comment on the riots in the city in the eighties and how black people weren't fighting against each other in gangs. Neither of them managed to find out that there was also a fear of gangsters from Jamaica which united the other people in fear against them.

Gangland UK is a far more professional documentary, giving facts in its short time frame with a rather puzzled manner. The main criticism of One Mile Away is usually that it is clear to the viewer that the gang members were manipulating what was shown, including one person refusing to appear unless his particular biased view about the murder of Letisha Shakespeare and Charlene Ellis was expressed. Well fine, don't appear then.

Both documentaries have the same flaw of dramatising gang life. There is a LOT of posing going on, which is to be expected, but you would think that documentary makers would have a way around that. Like using actors to cut out the attitude. This isn't difficult.

I think the impression the gangsters give in the two documentaries is rather different. In One Mile Apart they come across rather as unruly brats - you definitely get the impression that Penny Woolcock got more enmeshed with them and thus less objective than the businesslike approach of Gangland UK. Gangland UK does something very interesting because apart from the complete pointlessness of the conflict it also brings out how pathetic it is - it's pointless, motiveless, NOBODY benefits from it, and there's a heap of corpses. In fact I came across this picture of the actual undercover police officer who finally brought most of the gangs to justice, and that brings it home even more clearly to me that the leaders of the gang were slightly lacking because they were caught by this guy. Is it even possible to look at that CCTV picture and not see one of the most obvious undercover police in world history? Seriously? 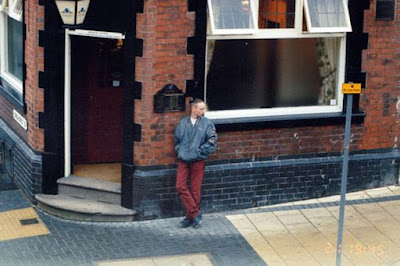 So in conclusion of the two Gangland UK is the better one but One Mile Away is also well worth watching. They're both available on the internet.

If you would like to support me and this blog you can buy me a coffee (or a box set) here.
Image source
2000s TV Birmingham on TV