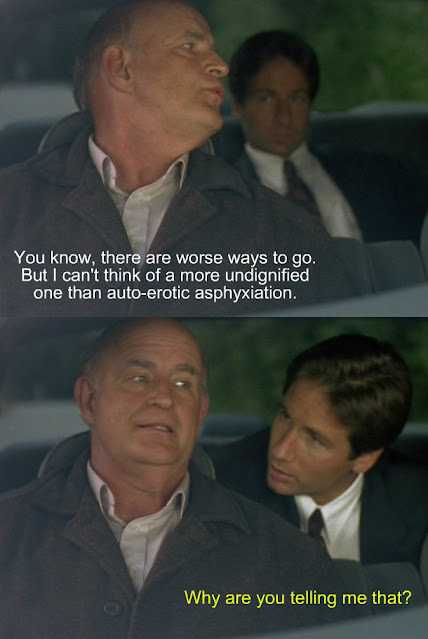 This will probably be the final post for Fake Psychics Week and of course we have a real fan favourite of The X-Files. In fact it might even be *the* most popular episode ever. I will admit to stretching 'mediums' to include other psychics here.

The reason for this popularity isn't too hard to find, it's that it has philosophical depth, talking about free will and predestination, has great humour, a shed load of lovable characters and you'll love it if you love anything weird. At the time of original broadcast it was a bit of a departure from the classic X-Files up until then and rather cemented the fact that not every X-Files had to be about the show's internal mythology.

I am taking The Stupendous Yappi as the fake psychic here, because he uses all the classic showmanship of the fake psychic and mutliple Barnum statements. In fact the profile of the killer he comes up with is genuinely so vague it could be loads of people. I love the bit where the entire team applaud at the end of his reading. Howeber the plot isn't as simple as one fake and one real psychic as Bruckman's reading incorporates many of the same things as The Stupendous Yappi's - perhaps because they are actual hits among the Barnum statements. Additionally  both Bruckman and the killer have psychic ability and can see different aspects of the case.

Now of course, having said that this show is a fan favourite and really good you just know that I'm going to take an axe to it. I mean, you did all see that coming didn't you?

There are holes in the plot of this show you could drive an elephant through.

The main problem is that Bruckman's only psychic ability is to be able to see people's deaths. It is slightly confused by him knowing information about the owner of the key ring by having sold him insurance, but at various other times he also sees many other things including the favour of the pie Mulder steps into in the kitchen, the location of bodies, knowing that it's Mulder at the door and what he wants, and other things.

This next one is a major series mythology fault to my mind. I must be honest and say that any serial killer who doesn't know why he does it, keeps asking psychics, then kills the psychics... Well, I'm not what ou'd call impressed. You could say that that is about as psychopathic as you could wish for, but that's what makes this an error in the series progression. One of the whole points of The X-Files is that Mulder is a brilliant criminal profiler first and foremost. Are we seriously supposed to believe that Mulder wouldn't have been all over this killer's profile like a rash? As a break in the progression of the series, rather than helping it, I think this episode could be seen as rather derailing the progression.

There is also the way the killer is disproportionately satisfied by being told that he's a killer. He would have wanted further clarification and explanation, I'm sure. See? I'm so psychic I know how a killer who never existed would react.

I have watched the episode four times to write this blog. As I watch it repeatedly I get less impressed with the way lace is left everywhere by the killer. It is explained internally by Bruckman's reference to the song Chantilly Lace. But I really don't like the way the connection is made whereby the killer presumably (although this isn't stated) knows that that song is related to Bruckman discovering his psychic abilities, leaves the threads assuming (correctly, obviously) they will be collected by the FBI, and also assuming that the FBI will involve Bruckman and also show him the fibres. It's too tenuous, and also let's not forget that this bloke doesn't know why he does things, things don't make sense and he's supposed to be confused!

I think my absolute favourite bit is where Bruckman asks to see Mulder and Scully's badges again, or possibly the bit where the chain smoking FBI officer is relieved he will die of lung cancer, and  how great it would be to have a life insurance salesman who can foretell people's manner of death!

I hope nobody gets mad at me because I've savaged one of the internet's favourite episodes of The X-Files - I do actually like it, but I like to write something different from everyone else. Plus it came apart as I watched it repeated times.

Finally I can assure you you don't need fake mediums when you have a psychic pig. And this isn't a joke, he was televised predicting that Johnson would resign! But his chosen candidate dropped out. 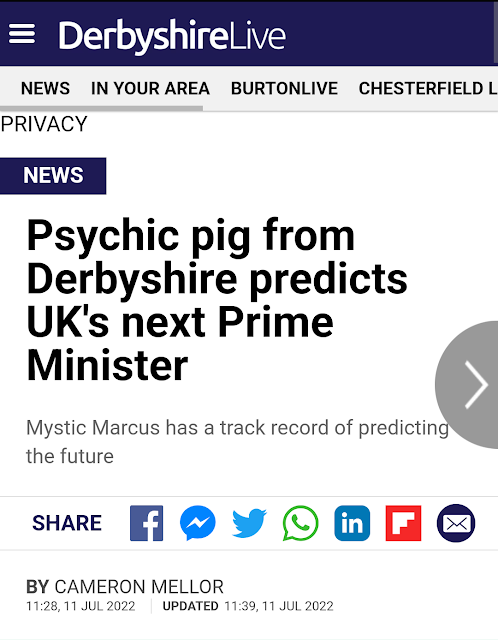