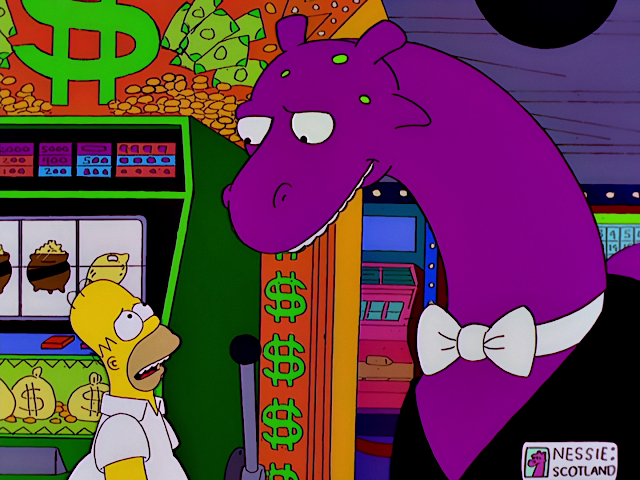 Next on Loch Ness (Monster) Week we have this Simpsons show. I think it would be true to say that the reviews are mixed and as far as I can see the consensus is that where it's good it's really good but it is only good in parts and the other bits are problematic.

I have read that this was inspired by the Simpsons writing team who wanted a whole episode about Mr Burns. The problem immediately arises that a fairly peripheral character has been moved to a position of importance which screws up the whole internal consistency of the show.

It also screws up the character of Monty Burns, although I'm a bit ambivalent about that. The whole point of Mr Burns is that he isn't popular, doesn't want to be popular, is a monster, and is a representation of Corporate America. I suppose it is true that when current billionaires aren't flying to space, not buying Twitter and not riding fairground rides on their own, they may have the insight to reflect on where their wealth has actually got them. I wouldn't hold out much hope though.

And that is the real problem here, that this show was clearly written by writers who are not sociopaths. They try to imagine the billionaire's human relations from this point of view and it rather fails.

Take the radio show. If you have what it takes to be a billionaire and own an unsafe nuclear reactor but avoid prosecution, the radio appearance as depicted here wouldn't happen. You only appear on Shock Jock radio if you're happy to be laughed at. Burns would have been inclined to control the whole appearance rather than let it happen.

There is also the whole question of courting popularity. Arthur Fortune's seeking of popularity is obviously a retail kind of popularity, and the fact he gives out single dollar bills indicates he's not going to really give much away. I just don't believe that any billionaire would really be interested in actually being popular and the sooner the entire world realize nobody else matters to them, the better.

To summarize: this show is giving a sociopathic billionaire human concerns that they wouldn't really have.

Ironically I think the aspect of taking the Loch Ness Monster is as close as you could get to the way an actual billionaire without a conscience would approach it. And of course the motivation would have to be about manipulating other people.

That's the real point, isn't it. Of course Monty can't buy me love because Monty doesn't understand what it is!

There is also no shortage of cultural references in this one. I'm a bit torn about this because I'm not sure whether I think it means the show is reflecting explicitly on our society or whether they've just overdone the references. This one must have been fun to make.

In terms of mirroring our society for most people the obvious warning would be idolizing the mega rich and allowing them too much power. In immediate terms there's a very obvious reference to how we shop and choose what we buy, where local shops are clearly contrasted with huge multinational chains.

There is also a reflection on what we do in our families in our down time, because the walk that Marge drags the rest of the family on easily becomes derailed into a shopping trip.

So all in all, an episode which was intended to focus on a side character which contains quite a lot of painful reflection. It is frequently called inconsistent but my own criticism would be that it gives Burns emotions he's not likely to have and way overdoes the cultural references.