The Saint: The Old Treasure Story 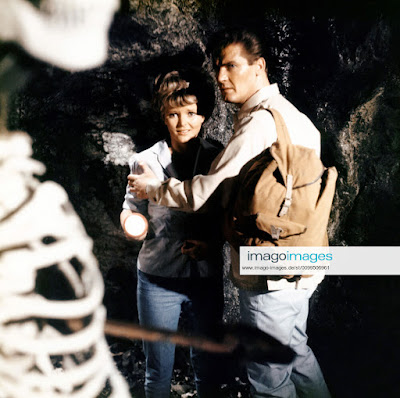 The great advantage of the gentleman adventurer televisual persona of Simon Templar is that the show could basically go anywhere or adopt any plot device, as long as there was a lounge for him to lounge around in.

Here the show turns into a combination of Cornish-village-mystery and treasure-hunt-mystery. I suspect that this departure from the exotic scenes may not be so popular with the fans, but am not sure because I have strangely been able to find relatively little about this on online. In fact apart from a couple of websites specifically about the show (which as far as I can see are both in a process of building and haven't covered every episode) I do also wonder why there's relatively little about The Saint online. Don't get me wrong - there's not nothing, but when you google most episodes of most cult TV shows of this era you find a number of familiar websites blogging about them and you don't get that for The Saint.

I can't think why - honestly these episodes are a gift to the blogger. They draw on so many classic tropes of TV and film that it's pretty much impossible not to like them, they are old enough to have a number of outdated attitudes expressed that are a gift to comment on, and there's always the way Templar takes the nearest woman and flirts with her or does something outrageous to her. Seriously these posts write themselves. I wonder, actually, whether it is because the show may be perceived to be less... interesting? exotic? quirky? than comparable shows of the period. Certainly when I was watching classic TV repeats before I was ten it was in my holy trinity of Mission Impossible, The Man from UNCLE and this show, so I have always felt it was right up there. Also it's possible that once things aren't so present on the internet they get less attention generally.

The show is a gift and this episode is not exception. Beyond the usual arrival of Simon Templar the show feels very much like a classic mystery at the beginning. You can't beat a Cornish village in a storm with a stranger walking into the pub, because you just know something terrible is going to happen and there are going to be pirates, treasure, maps, and what have you. It even has a thunderstorm going on and a mysterious stranger walking in in a sinister manner. This is of course all well set up by a story told by Captain Bill Williams who has asked Templar to go and see him because he is afraid since he has written a fictionalised account of hidden treasure of Blackbeard with an indication he has part of the map. He murdered another man involved in the treasure and is worried this will come back.

Basically the rest of this show is about the search for Blackbeard's treasure, using a map in three parts, each one of which is owned by a different person and so they all have to be in on it. Actually it turns out this divided map is a common plot decide and Television Tropes called is a dismantled Macguffin, whether or not the thing is an actual Macguffin when put back together. Obviously I'd somehow managed to miss this and the only example I knew of is the map in three parts in the Tintin book Le Secret de la Licorne (1943), with obviously a similarly nautical theme in the person of Captain Haddock. Obviously we'll never know whether it was based on the Tintin story but there is a similarity with the three parts of the map and the fact that the first part is hidden in a model ship. Wouldn't it be good if the boy reporter inspired an adventure for the Saint?

The nautical and Virgin Islands setting of the rest of the show is more classic ITC territory because it has more scope forTemplar to be suave and all David Niven. Also you do have to love the way that using only stock footage and back projection ITC could film shows set literally anywhere in the world and rarely leave the south of England. The three parties to the map don't even trust each other enough to put their parts together until they actually arrive at the island in question, so you just know this show is going to be a feast of competition, hatred, danger and infighting.

The plot is a little tall in that all of the concerned parties in the treasure happen to set out to Cornwall at once in response to a fictionalised account. It's a very classic story of treasure hunting, but I do wonder whether it would be too much of a different genre for Saint fans to take to it. In fact I found a letter online from Leslie Charteris who commented (words to the effect that) his own story was completely gutted and replaced with formulaic ingredients. There is a twist to the plot but it's a rather expected one. I don't think we talk about a genre of cozy TV as such, although much of what I watch would fit into it, and I think The Saint is no exception - you get gripping stories but you know that everything is going to be OK at the end.

Incidentally this show is the reason I discovered that Blackbeard was a real person - I would never have guessed.

An excellent story and show, but perhaps not enough of what people think of as a classic Saint to be a favourite of the fans.

Finally, apparently some Americans are under the misapprehension that the Conservative party have had a shred of decency in destabilizing the government by resigning and forcing Boris out. They could and should have done this at any time in the past several years of relentless corruption and lies. It was purely out of self interest to appear to have some decency by getting rid of Johnson because every time the party does that they do better at the next election.  Don't forget the old English saying 'Never trust a Tory', it's of a par with 'As empty as a copper's helmet' and 'Stop telling me Johnsons or you'll go to bed with no dinner'. The other question of course is what kind of tinpot banana republic has 45 members of the government resign on the same day and not have a general election?

This is a TV blog so have some highlights from the coverage.