The Saint: The House on Dragon's Rock and An Appeal 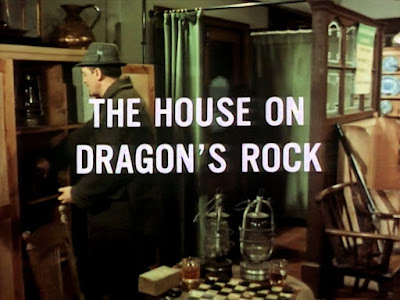 I have so much planned in my head: series of posts on Hammer House of Horror and TV made in Birmingham, continuing my series of posts on Fury from the Deep, The Tomorrow People and The Avengers Series 1. So obviously that's why here is another post about The Saint. I can never actually guarantee what TV show will grab my attention.

These later episodes of The Saint don't tend to be favourites of the fans, who are conditioned to expert endless globe trotting, international intrigue and Cold War conspiracies with dolly birds turning up at every airport. I do have some sympathy for them, but also can see that it's virtually impossible to keep that up for any length of time. After a time the fans then start complaining that you're doing the same thing, and really you can't win. Once you've portrayed Templar gadding about one sunny European resort it's a bit difficult to make the others different. I suppose Doctor Who would be the classic example of a show which has really changed quite a lot from its beginning as a quite stodgy educational show.

Personally I think these later ones are interesting in a different way - with so many of them being set in Britain of course they have a different feel - in fact I keep thinking of The Champions or pretty much any other ITC series that sets foot in this country at any point.

In fact the consensus on this Saint is that it isn't really like an episode of The Saint at all, and most commenters online compare it either to Doctor Who or to a B-Movie, and I can honestly see why. It has all the classic tropes of isolated village, mad scientist, superstition, fear, science fiction...it's an interesting insight into what would happen if ITC did Hammer. No tell a lie, it is actually ITC doing Hammer! Or possibly ITC specifically doing Bela Lugosi, with a bit of Trog thrown in.

The other major comparison is with Doctor Who and the mad science thread here is absolutely insane, and worthy of any Doctor Who adventure. It's all the better for the contemporary visual effects so that the appearance of the creature is completely unconvincing, but then this was made in the sixties! It's basically a classic mad-scientist-destroyed-by-the-monster-he-has-created story, just with Simon Templar plonked in the middle of it. It is rather complicated by the part where Simon Templar sets fire to the cave they're in and it then collapses after he shoots at the ant, so they have to escape, so there's a daring escape bit as well.

To be honest the outcome of this departure from standard ITC is excellent. I personally don't have any criticism of this episode, whether you want to read it as an unusual Saint episode or visualise yourself in a Hammer film or another ITC series. In fact it's striking how ITC reproduces the formula of any of those other productions, and makes me reflect on how much of the look of a show, film or studio is a 'brand' thing. That's really what I was thinking in my last post when I reflected that I hadn't been thinking of The Prisoner as an ITC show because it looks and feels different from the others, and departs somewhat from this brand look.

I also don't blame ITC in the slightest for departing from their brand look in the slightest, and not merely to keep a long running show going. As time has since worn on (this is a totally personal opinion) the ITC house style of jetsetting foreign shows has tended to become rather tacky and debased into some frankly dreadful shows. I'm not feeling the need to name any in particular and will plead my own amendment that dross doesn't appear here. I do wonder whether ITC had in mind that once foreign travel became pretty well universal they couldn't titillate people with stock footage of foreign places any more and would have to offer the public something else.

When a show borrows literally everything from several other genres at once you do also have to wonder whether it is deliberately parodying them, but I haven't found anything to this effect online or on the fascinating commentary with Production Supervisors Peter Manley and Malcolm Christopher. They do, however, say that the village we see is a real village in Wales shot on location. I wouldn't dispute that the other scenes are in Wales but that one does look to me like a set - it's entirely enclosed on three sides and I haven't yet come across a village anywhere in the world that doesn't have some sort of road through it. Hey ho, that's another one I'll never know.

There is a full house of familiar faces from the TV of the time including Annette Andre, Anthony Bate and Mervyn Johns.

Once again I don't have any criticism. This show is what it is and you'll either like it or not ad lib.

I thought there was a book about The Saint series but haven't been able to find details of it, I just keep finding Charteris's many novels about The Saint and unhelpfully there is actually one called The Saint on TV. Does anyone know if such a book exists? I'm interested in a pirate copy or one to borrow from a library or the Internet Archive, not to spend real money on.