The Goodies: The Loch Ness Monster 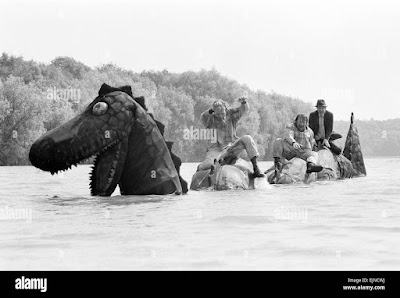 The monster is in brackets because I have a show in mind which doesn't mention the monster but is just set near the loch. Look, I don't make the rules. Alright, perhaps I do.

I have been watching The Goodies quite a lot but not blogging about it. I think it is one of those shows which are difficult to write about, and certainly I think this is reflected in what the internet has to say about this show. Most of the reviews tend to gravitate very quickly to describing the show, and as you know that's not really what I'm aiming for here. The other thing the internet tends to focus on with The Goodies is the way much of the humour hasn't aged very well, and there's a limit to how often you can say that a show wouldn't be made today, without beginning to wonder why you're writing about, or even watching, it. It's really difficult to write a blog post about a show which stands on its own, doesn't really have too much of a point to make, and where the jokes are the point!

Here they try to help a desperate zookeeper who has tried to kill himself, played by Bernard Bresslaw, who can't populate his Monster House. I've never been to a zoo with a Monster House personally, but obviously cryptozoology is going to be the theme of this week. It's slightly insane that the cage was built before the zoo had a monster to put in it! So obviously what you put in it is the Loch Ness Monster.

I think an accurate summary would be to say that there isn't a single part of the English caricature of Scotland that is left alone in this one. I do rather like the bagpipes spider.

As always spoofs of contemporary adverts are included. The one saying that the cheapest time to phone your friends is when they're out, is a parody of a series of adverts for the cheap phone rate after 6pm, which initially featured Harry Secombe in the sixties. I have looked but unfortunately been unable to find any of the originals online.

High points are seeing Bresslaw in a role so different from his (to me) usual ones (he even sounds different to how he does in the Carry On films) and the parodying of the tourist industry.

I don't have any real criticisms.

Ironically one of the Goodies, Graeme Garden, was born in Aberdeen. You can tell that Tim isn't the Scottish one because when the bagpipes spider attacks him you can see he's got underpants on under his kilt. As we all know, No True Scotsman...