Randall and Hopkirk (Deceased): But What a Sweet Little Room 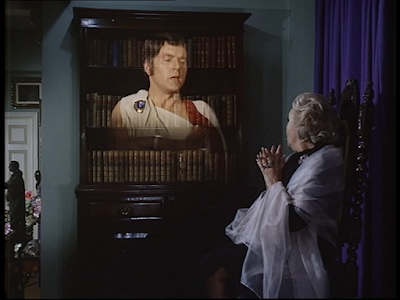 It's Fake Mediums Week on the blog! Lucky you none of you come here for sensible blogging, isn't it. Actually it's remarkable how things come to your attention in common themes. When I posted earlier this year about television plays it was remarkable how psychopathy came up and I wasn't even looking for it. Now in my viewing fake mediums have come up. There is of course a certain irony in there being a Randall and Hopkirk episode featuring a fake medium. I like the ones where people who aren't knowingly psychic or professional mediums can see Marty either all the time or under certain circumstances. On the other hand I suppose having a real ghost with you is a fairly certain way to weed out the fake mediums!

We're still in classic ITC territory and I'm going to say it right now - for my money you can keep all the CGI in the world, there's nothing to compare to a good set and some back projection interspersed with some stock footage. I like my TV to be unreal and CGI just doesn't compare. Have you noticed how when you don't see much of it you really notice CGI when you do? It looks really fake just like....oh. Nonetheless the ITC wonderfulness of this is marvellous - the locations alone are typical Avengersland, the sets are too, and it's just full of ITC coziness from beginning to end.

I mustn't let my enthusiasm for this make me avoid the fairly obvious shortcomings it has. The chief one being that it is rather mixed in terms of what's going on and can be rather disorientating. Sweet little Room manages to fit in two murders (one very violent), an attempted murder, Jeff getting a beating, a fraud and one of the murders being pinned on an innocent man. Actually it does sound gruesome when you put it all down like that, doesn't it. On the other hand it has some incredibly funny moments like the wonderful bit where Mr Eliot conducts an orchestra in his own home (we've all done it and hopefully there aren't any ghosts watching) and particularly the scene where Marty appears to Madame Hanska the fake medium and gives her her first experience of seeing a real ghost!\par

This mixture of some rather extremely opposing elements means that this one has a decidedly mixed reception online. I don't think I have read one review which is really positive. I have read several people who feel that, since this was the second in production order, it wasn't really settled what to do with the show. Most contrast it unfavourably with the lighter, more slapstick, episodes of this show. Given that other episodes are much lighter, I do wonder whether the possibly incongruent funny scenes were put in to try to soften the string of crimes. After all this isn't a straight detection show.

I also think what this show is aiming for is a sense of unreality. It's kinda unreal enough to have the lead's dead partner joining in, I know. But Madame Hanska is very obviously not a real person. Think about it - real mediums tend to have very down to earth names, to give an impression of being plain and straightforward. Similarly the man who does the murder at the beginning is called Arthur de Crecy. I'm not sure what they can have been aiming for but neither of those names is exactly calculated to give the show an aura of candidness. The other thing is that Jeannie plays a good stooge, but doesn't think there's a huge trick going on when, frankly, it rather hits you in the face. She normally strikes me as a very canny character who wouldn't be taken in that easily.

In my humble opinion if you watch the show assuming that it's intended to be unreal and rather tongue in cheek, that rather smooths out the inconsistencies.

There is just one thing which is completely wrong with this show, and that is the reaction from Madame Hanska when Jeannie first goes to the seance with her fake husband. Madame tells her that her husband doesn't exist and then one of her henchmen takes Jeannie to a cafe and worms the story out of her. In reality if you are a fake medium you don't do that. You would tell the person something to the effect of her dead husband is here but weak and it will take more goes to draw her in and give her hope. You might do a bit of cold reading or tell her something that honestly could apply to anyone. Then the poor bereaved punter will keep coming back. If they get the reaction they get from Madame Hanska in the show, they don't come back and go to a different medium instead. In addition, Jeannie's reaction is not the normal one - it suggests she isn't really there to contact her dead husband. As I say in reality she wouldn't have gone back.

My absolutely favourite thing is Madame Hanska's magnificent gothic pile. I haven't mentioned it for a bit but she also happens to have Steed's library in the seance room!