Leap in the Dark: The Ghost of Ardachie Lodge 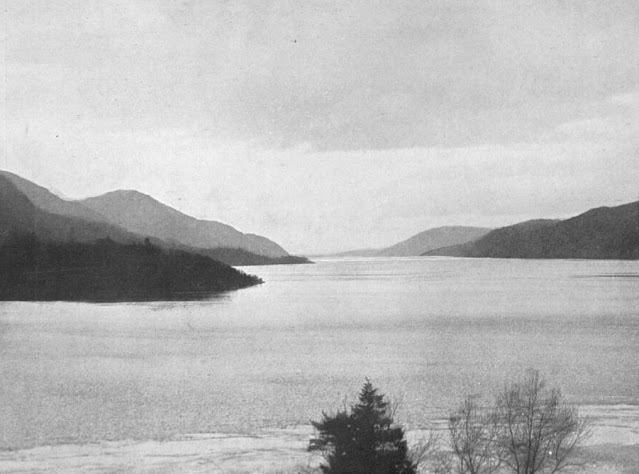 Next for Loch Ness (Monster) week comes this episode of Leap in the Dark about strange phenomena in an old lodge on the banks of Loch Ness. This is the show responsible for the brackets around the word 'monster' because the titular monster doesn't feature in it although you could say that other sorts of monsters do!

I wrote an introduction to this series when I was going through orphaned shows (which you can find here) so without further ado can go straight into the episode, which has rather been biting at me to do here. It's about a couple who take up pig farming in an old lodge at Fort Augustus near Loch Ness. They hire help and soon after their arrival strange things start happening.

This episode is introduced by no less than the great Colin Wilson, doyen of all sorts of weird stuff at the time. He was something of a polymath and may be best known for his role in the angry young men school of literature, with his work The Outsider. He wrote extensively on occult and mysterious subjects around this time, and he provides the introduction to a dramatisation of an actual case of strange phenomena.

I'm not going to name where I have been volunteering because I'm not ocnvinced I'm supposed to know this story,  but I have been doing some voluntary work at a museum. A psychic group went and did a sitting there, and contacted the ghost of the man who originally stumped up the money for the various buildings to be bought and turned into a museum. Frankly nobody is very impressed because this guy had virtually no contact with the buildings or the museum: he literally just provided the funds and died. It feels a bit too much like they had read up the history and produced the man with the name, instead of all the people whose names we will never know who had lived there over centuries. The events in this show are not like that, because the property isn't a famous one and the couple can't know anything of its history which would make them make up the things the wife experiences.

Like other episodes of Leap in the Dark, the events of the show - a woman hearing things and seeing traumatic events possibly being reenacted in front of her- are intended to spark debate and in the manner of the time are as close as we are going to get to actual reports of alleged psychic phenomena. It turns out that she was seeing things which had actually happened and were known to the locals, but were not known to the public and she is stated never to have had contact with the area or known anyone.

I just wonder what the point is of rapping. Who the hell wants to be dead and just knock on things? When I'm dead I want people to be thoroughly frightened so blog posts will keep appearing and I won't just rap. I'm not sure what I'll do but it'll be more dramatic!

The Society for Psychical Research sends round two of its investigators to investigate what's happening. Things get rather dramatic and the story of who the alleged ghost is supposed to be, the former owner of the house who was attached to a particular rose tree, is developed.

Ultimately they get the house exorcised by the abbot of Fort Augustus Abbey - there is a mention of Roman Catholicism in several places in this one. After the residents were driven out boys from the abbey school were reported to keep seeing the old lady who liked roses walking about the garden.

I'm not convinced by this in any way, and personally think that usually in this life you will reach an explanation of what is happening if you follow the money or other assets. The couple appear to have been virtually forced from the lodge (although that isn't explicitly said) and the housekeeper and her husband both lost their jobs. I would have thought that the obvious thing to look into would be who had an interest in the property and who stood to gain by this. I wouldn't be convinced by the boys seeing things after this happened, because it was gossiped about and people will just see what they expect to see. Frankly any ghost worth their salt would have told the abbot of Fort Augustus that he had far more pressing business he should have been paying attention to (do not look at the Scottish Abuse Enquiry's report on Fort Augustus if you're of a sensitive disposition, it even shocked me).

So I'm not convinced by the alleged haunting or by the way it was investigated.

I have a rather individual query about something said, which is purely because I don't understand it and can't find it online. Obviously I'm a city person so have virtually no idea about farming of any sort whatsoever but I just don't understand why the old man was so surprised that the couple at the lodge should breed pigs. He described it as virtually unknown in the area. Why? I am not aware of pigs having particular needs which couldn't be met in Scotland, and sure enough they soon started breeding like, er, rabbits. It's also not like there would be any cultural problems to breeding pigs there.

Otherwise there is one great big glaring error. The housekeeper who saw things and was described as being completely unacquainted with the area is described as having never being out of England. It's not impossible of course but it's slightly unconvincing that her name is MacDonald and she has no Scottish connections at all!

Otherwise this is a fascinating show delineating a real world reported case of alleged haunting on the banks of Loch Ness and an investigation by the Society for Psychical Research.

Finally have a look at this great fake video of poltergeist phenomena in a Manchester office!