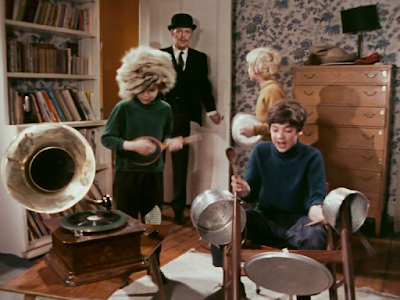 I have now seen Grasshopper Island (1971) all the way through once and have had my initial impression confirmed, that it is a delight. True to form it has also raised many a question for me.

It is a series of very short episodes about three brothers (referred to throughout by their nicknames of Toughy, Smarty, and Mouse) who get tired of authority figures so decide to run away for a year and a day, to a desert island. They pack up and go to the docks, where of course nobody will take them except for a man described as an elderly boy, because he isn't old and isn't young. He takes them away on his boat and leaves them on a desert island, shot on location in Corsica. He won't leave them and can't cope without them, but eventually gets the hint and leaves the brothers there. This leads to the longest, middle part of the show, where they are living this blissful life in the sun on their island with no authority figures. They have the odd squabble but this is not Lord of the Flies, they get on and actually live the blissful, demandless life they were looking for. Until the final part of the show where they discover that a grasshopper expert called Cornelius Button also lives on the island with his housekeeper who has the unfortunate name of Lupus. Lupus discovers the boys and keeps them a secret from Cornelius, until he finds out about them when one of them gets into trouble at sea. He doesn't worry about the past and the future so just accepts these boys who have appeared on the island. Then in the final part Cornelius's right to be considered a grasshopper expert and live on Grasshopper Island in challenged by another grasshopper expert, Dr Hopper, who is seen off by the boys.

So this creates a slightly strange show where the boys spend a short period of time at home with a number of voices of authority (all played by Tim Brooke-Taylor), then another short period of time with the elderly boy (played by Charles Hawtrey). There is then a long middle section where they are alone on the island with no adult characters. Then there is another longish section where Cornelius Button (played by Julian Orchard) and Lupus (played by Patricia Hayes) have equal screen time with the boys and a very short part where Dr Hopper (played by Frank Muir) appears with all the other characters.

Why would you have so many big name actors and make so little use of them? I honestly find it really strange. It means Tim Brooke-Taylor plays no fewer than six characters in a matter of minutes and then doesn't appear again. I just think this is underusing the celebs in favour of a collection of three boy actors who - get this - aren't even named, not even in the titles or in the insert in the DVD box. They're also not named in the titles. According to here they were the real-life sons of Joy Whitby who wrote the book and was behind the series. They don't look too alike because the two youngest had their hair dyed for the show. Joy Whitby, it turns out, is a bit of a legend in children's TV in this country because she was behind the long running story show Jackanory.

So if you were to look at this on IMDB (or anywhere else) you would expect a show with Tim Brooke-Taylor, Charles Hawtrey and Frank Muir, then you might blink and miss them, and wonder whether you're watching the right show. And then wouldn't be able to find out who you were watching. I just can't get over this.

I have found myself repeatedly thinking that it is essential to watch this show through child's eyes to appreciate it, so I have tried to discipline myself to do so and I maintain that it is a delight. It is very obvious that the events of this show couldn't have happened in reality, either in 1971 or now, because even then a strange man taking away three children who were not his in front of a huge crowd at the dock would tend to attract the police. There are things clearly indicating the wonderful unreality of the show: the boys have a trunk which plays music (and not as in a music box) when you open the lid, for example. There is also a sense of unreality in the appearance of the boys: their clothes are intensely fashionable and stylish, very colourful, and remain so throughout the series. I think what I love best about the show is the way everything looks and the sheer beauty of its presentation. Mouse, for example, frequently wears a hat and the collection of hats he wears are incredibly stylish. There is alaso a sense of magical omniscience, because the boys find everything they need to get on with their new life as soon as they leave the Elderly Boy.

I'm not going to beat about the bush. I'm just plain jealous at them living in this island dream and at the things they have. You just have to forget the reality to watch the show, because we all know what three young boys would be like after about a week unattended on a desert island. I suspect Lord of the Flies would be closer to the mark! However as it is I think the island represents a perfect world of escape. I particularly like that the two adults who live on the island also behave as the children do, don't question and just go with it. They are contrasted to the adults at home, the elderly boy and the invading Dr Hopper, all of whose behaviours are problematic to the boys in one way or another. It is the island which is the refuge and the dream, where reality can be suspended and there aren't any stresses. Let me in!

I suspect there are ways in which this show hasn't stood the test of time very well. For example I haven't found anyone actually saying this online but I feel like the crowd who are against any health and safety or human rights would look on this as an example of how wonderful life was before health and safety, would comment that you couldn't do that now, and be totally unaware that you couldn't do that in 1971. They would probably also be very happy that there are no black people. I also wonder whether any author/producer nowadays would make a TV series which is basically her own sons running round in their underwear. I have a feeling they would not be terribly happy. 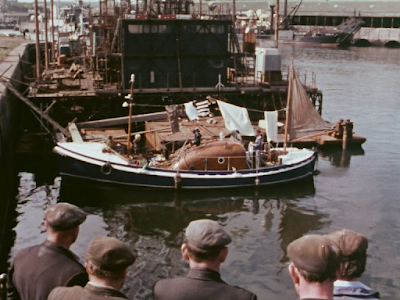 This wouldn't have affected kids in the seventies because they wouldn't have seen it but Patricia Hayes's role can be a bit confusing because she plays it just as she did Mrs Cravatte in Hancock's Half Hour, and it's somewhat disorientating.

There are confusingly two different versions of the show (see here for further details) and some DVD releases are only available in German. I bought this one because it was the cheapest I could find on Ebay - it's the longer version and has sound tracks in German and in English. My only criticism of the disc is that if you choose the option to play all episodes, the sound track keeps reverting to German at each new episode and you have to change it back to English. I have been watching it on a laptop using VLC media player so don't know how it would behave in a DVD player.

So in summary, a very sweet dreamy TV series, with excellent visuals set on a dreamy island. I'm green with envy.