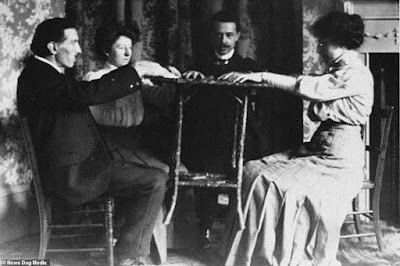 Next for Fake Mediums Week we have Seance, a special made by Derren Brown in 2004.

While I'm on the subject of fake mediums I have remembered a random fact which is of relevance. I'm not sure whether any other states had these kind of laws but from 1951 until the act was repealed the possibility of real mediumship was kind of indicated un UK by the Fraudulent Mediums' Act of 1951, which repealed the Witchcraft Act of 1735. Despite loads and loads of mediumism going on there were only four convictions under the Act.

On the other hand Derren Brown is someone who very clearly doesn't believed in mediumistic abilities, so he isn't actually a fake medium, but this show is showing how fake mediums do it. To be perfectly frank I find him a bit freaky, because if I were in his presence I would start wondering whether I had decided I wanted that cup of tea or whether he'd implanted the idea in my head. This show is all about fake mediums (that is all mediums, in Brown's view, even if the fakery isn't conscious) and the normal effects of mediumship are reproduced here purely by the kind of psychological tehcniques of suggestion and persuasion that Brown excels at.

I am going to have to be frank and say that I looove this show, and so really will not be criticising it in any meaningful way. Whether this is because Derren Brown has cast a spell on me, I will leave to you to decide.

Actually this show was never going to be popular with the public, least of all the sector of the public into mediums. He begins by repeating the fact that Spiritualism as we know it began with the Fox sisters and one of them admitted that they were frauds. Ouch. In fact this is one of the UK shows with the highest number of complaints ever. Channel 4 received 300 complaints before the show even aired (humanity really is screwed, is all I can say), mainly from religious groups concerned that a TV show was dabbling in the paranormal. If they'd bothered to wait until it was shown or spent about 10 seconds reading up on Derren Brown on the internet they would have discovered that that was not the case. Ofcom, the government communication regulator, decided that the show had not broken the broadcast code because it was reasonable to depict the techniques used by fraudulent mediums and that they were shown after the watershed. Personally I just think that the most likely people to complain about this show would be fraudulent mediums themselves, but hey who am I.

And any fraudulent medium would be really worried by this show because some proper freaky stuff happens. Brown does his usual trick of making it plain that nothing magical will be happening, it's all psychological, and then talking as if he's talking to a ghost to trick you into believing it. In no time, we have stuff flying around from a bound 'medium' in a spirit cabinet, we have a spirit communicating by moving a glass, and we have 8,000 members of the public ringing in to say that their dead relatives are appearing in their living rooms. I particularly love the bit where one of the participants crosses himself. This is the most freaky television (that said I haven't yet seen Derren Brown Investigates but it's in the line up).

He basically trashes the entire profession of medium by giving out some cards and telling the person who gets the card with the cross that she will be the medium and will be able to channel the spirit of 'Jane'. Which she then does.

Contrary to the rather fluffy TV I normally watch and write about here, this is a fascinating programme about a factual subject which shows the reality of how you could fake mediumship.