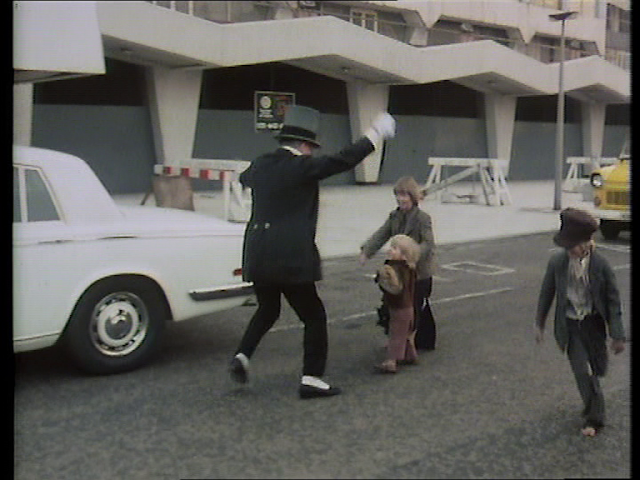 I'm putting Gangsters (1976 - 1978) as the first blog post in this series of posts about TV related in some way to Birmingham to get the post which I anticipate will be most difficult out of the way first.

Recently I seem to be writing  a lot here that I find various shows difficult or don't understand things, and I suspect that this is because I'm in a place where I can think about a few things I've been trying not to think about. So of course I'm going to have to come clean and admit that I love this show dearly but also find it incredibly difficult. I honestly find it confusing, am never very sure what is happening or who is who and keep getting distracted by the spectre of some since-demolished Brutalist masterpiece.

In preparation for this post I have watched through the whole show again (over a few weeks, not in one go), read what I could find about it online and watched the Open University show about it which forms an extra on the final disc of the DVD box set. I am ashamed to discover that at least two characters I thought were criminals were not, and while I feel like I have it slightly clearer than it was to start off with, I'm still confused. However at my great age I'm finding I am much more often confused than I used to be so that has to be considered, however because it can be confusing, if you have the box set I would suggest you watch it in the order of: the original play (on the first DVD), the Open University programme about the show (on the last DVD) and then the rest of the show in order.

The Open University programme clarified something for me: at the time of original broadcast the show had strictly mixed reviews. In fact some were considerably damning. It was criticised for  - do I even need to say it - being confusing, and all the things that are all over the internet about it: the problematic racial depictions, the violence, the fact both series are completely different, the way the protagonist gets killed off, the terrible state of our society, and so on ad nauseam. The show has also helped me clarify in my own head what I have never been able to get right in my head about this show.

Gangsters plays around with the idea of the hero. And in my opinion this is a major difficulty with it. In fact the hero Kline keeps being described as being an object - of aggression, desire, and so on. So I'm going to come straight out with what's wrong with the emperor's new clothes - you can't make the subject of the show be too much of an object, it creates confusion. The show has to be about Kline doing things and anything done to him has to be rather incidental - the problem here is that he is too much the object so that it confuses what's supposed to be happening. You can tell I've been watching the Open University can't you! I'm also going to come straight out with it and give my personal opinion that Maurice Colbourne is not only battling against the ambivalence of this role, but I don't think he's really got the magnetism to carry the role. There, how's that for heresy. I haven't really watched him in much but I remember him in Howard's Way and I think the role suited him much better. Here he is supposed to be a former SAS officer recruited to go undercover in the big bad underworld of Birmingham and he comes across like a copper pretending to be a punter and buying drugs from a dealer. It just feels nobody would be taken in for an instant.

Personally of the existing cast I would have given the protagonist role to Sarah Grant (played by Alibe Parsons) the undercover CIA officer. She has the presence to be the hero, the sexiness to be a sex object, and seriously would have carried a difficult role much better. God, I feel like I've just stabbed a nun, criticising Gangsters like this. However a much more obvious candidate for the role would have been someone like Lewis Collins, who could give it the alpha male treatment and also be inscrutable enough to portray the ambivalence of the role and not be swamped by it.

The other things the Open University programme made clear which I hadn't previously understood, was the sheer number of cinematic and cultural references in this show. I just think if you have to have too much commentary on a show to make it understandable it's never going to be that popular or well understood. I also think that with the complex plot this is a hugely ambitious show. Wildly ambitious. Too ambitious. It's got too much. You can't do drugs, crime, imperialism, racism and economics. No. And then when the actual author of the show appears in the final episode and kills off the protagonist before the rest of the cast literally walk off the set, I'm afraid what you've got is too much ambition moving into Showing Off territory and Nanny Doesn't Like It. The show basically doesn't have an ending as such, and even forty years later I'm far from convinced the world is ready for it.

The upshot is, I suspect most people watch the first series mostly (the more down to earth one about drugs), mostly ignore the second series, but basically don't really get all the way through this box set. You would think that there would be loads of sites with commentary on every episode, but tellingly there is very little. I know one person who is very keen on the show and who I think might understand it but I'm frightened to ask him in case he does and I feel silly.

What you do have is people saying what a great show this is for all the wrong reasons, I mean ones unrelated to the actual reasons you're supposed to like it. You could watch this from a seventies reminiscence point of view and love it, for example.

Another major reason that people talk about it on the internet is because of its groovy depiction of the Second City at a particular moment in time, when the rebuilding after World War 2 was basically finished and before the grim eighties had kicked in (for example this page on the Birmingham History Forum). The concrete is perhaps looking a little tatty already, but it's the Birmingham we all remember and loved and it's brutal and cool and gorgeous. I have posted some instagram posts with pictures of various areas of the city centre taken from this show: New Street Station, Smallbrook Queensway, The Bull Ring and Snow Hill Station.  I also notice that one of the major reasons it attracts commentary on the internet is exactly this depiction of Birmingham rather than the actual reason for the show, for example the page linked above on the Birmingham history forum. I think Gangsters also achieves the remarkable feat of capturing in some way the authentic Birmingham feel, of being the friendliest place on the earth and yet incredibly stabby at the same time. It's really difficult to capture but Gangsters somehow does it.

So having given it a good savaging and completely rubbished it perhaps I had better repeat that I don't post about shows I don't think people should waste their time watching. Despite being gravely flawed and over ambitious I do still like this show. I think the original criticism reflects the difficulty this show presents to the viewer. I keep wanting to say that perhaps it could best be watched as a straightforward undercover cop show, however there are so many other competing aspects to the show that you may have to watch it repeated times and concentrate on a diffierent aspect each time. I think you also have to watch the second series as if it is a completely different show. So perhaps it's best watched either as an experiment in TV or concentrating on one of its many different aspects at a time.

It does, however, benefit from showing a vanished moment of time and we have an advantage of being able to look back on it which the original critics didn't. And even saying that I'm aware I'm into poncey showoff TV critic territory.

If you would like to support me and this blog you can buy me a coffee (or a box set) here.
70s TV Birmingham on TV Gangsters