Birmingham on TV: The Flower of Gloster

The Flower of Gloster has to appear in this series of posts because it's a children's programme about three siblings and another girl they meet on the way, taking a boat along the canals from north Wales to London, so naturally they end up in the Venice of the Midlands, in one of the episodes.

I always forget in between viewings of it, that Flower of Gloster is a delight, an utter delight, it is so sweet, so nice, it is so redolent of a different age. Well, actually an age of incredible change. This was the absolute tail end of the commercial transport that the canals were designed for, and before they had a period of stagnation before being revivified as a leisure resource. You can read more about the show on the Canal World forum here.

The other thing I always forget about it is that it's a mixture of drama with actors (although the boy keeps letting his face show what he's thinking rather than what he's supposed to be thinking, which in itself is so sweet) and some parts where experts talk about various aspects of nature or the canals. Please don't get the impression from this that the show is in any way didactic or heavy, these parts are very short and worked into the story.

The episode about Birmingham is redolent of a very sixties day trip to the city because they intend to pass through while doing some shopping in the market, but they manage to get separated and end up staying hours. This means the show takes the opportunity to show the then three year old Bull Ring market and various other parts of the city. A lot of it takes place in the famous Gas Street Basin, which looks really very different now (but looking different quite quickly is a real Birmingham thing) and was then really quite down at heel. Incidentally the canal children's hostel that the boy gets taken to after he gets lost was a real place:

The Canal Boat Hostel in Wood End Hall was not a children’s home as such. It was a hostel providing what was presumably temporary accommodation for canal boat children.It was established in 1951 by the Education Committee in response to the 1948 Children Act which transferred responsibility for child welfare to local authorities and brought into focus the education of groups such as children living on the canals.One of the main forms of transporting goods at the time was by narrow boat on the country's canal network. Whole families would live on their boat, constantly on the move collecting and delivering raw materials and goods.It was thought that children could not be given a formal education while they were on the move on canal boats and so should be given hostel accommodation to enable them to attend school.As such, Wood End Hall was the first hostel of its kind in England. It was ideally located as Birmingham has a significant network of canals and Wood End Hall itself is only a few minutes' walk from the junction of the Birmingham and Fazeley Canal, the Birmingham and Warwick Junction Canal and the Tame Valley Canal. Known as Salford Junction, this canal meeting point is now underneath the Gravelly Hill Interchange (Spaghetti Junction).The hostel had places for 29 children, and all those in the hostel attended Birches Green School in Erdington. There remains, in 2010, a school on Birches Green Road.The hostel is thought to have closed in the 1960s when commercial haulage by canal boats ceased. Certainly, the canal boat hostel was included as a reference in the financial reports of the Birmingham Council up until 1965, but not after this date.

The only real criticism of this show is that there is a certain roughness about it, particularly in continuity. I have read that footage of different parts of the canal is slotted in in the wrong places sometimes and you do notice a few continuity errors in clothing. I can't remember if I said this when I wrote about the show before but I feel like there is a bit too much noise in the picture, particularly in the city episode, far too many lines and things, and I wonder whether they could have been got rid of without doing injury to the picture. 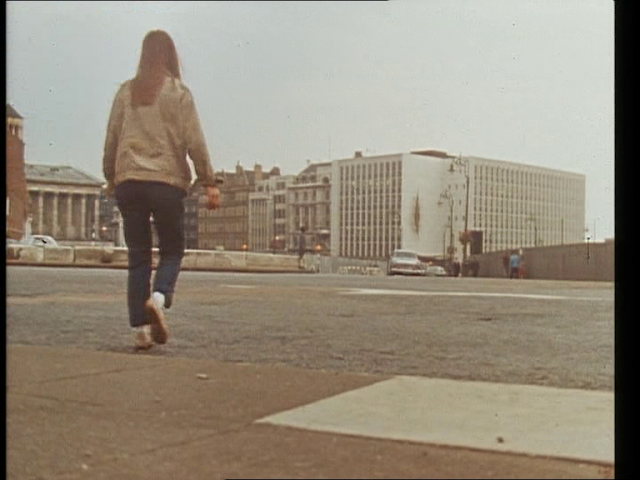 Finally in my usual completely idiosyncratic style I would like to introduce you to one building seen in the show: it's the very new looking white building in this picture. It was originally called Trafalgar House (later Beneficial House) and was Birmingham's first concrete framed building, built in 1960. It housed the public health department for many years and had a restaurant in the basement before becoming the original home of Snobs nightclub. I'm not sure why but it then spent a couple of decades mothballed with scaffolding up and I would like you to contrast this picture I took of it in March this year. In Birmingham the graffiti artists have jet packs! 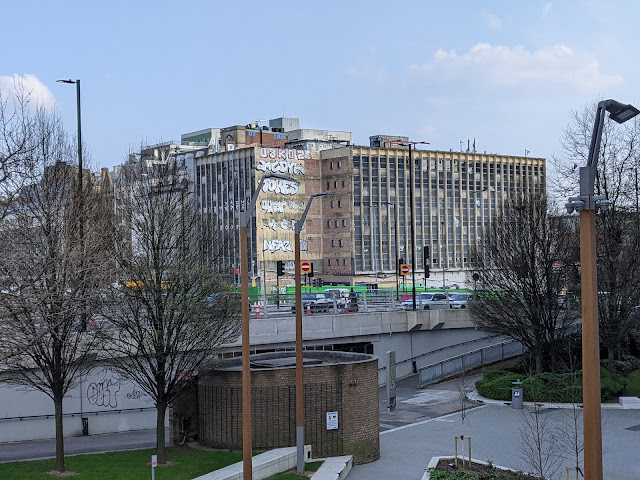 As before I have posted some pictures of the city from this show on my Instagram: Gas Street Basin, The Bull Ring.