In a recent post on The Prisoner I referred to this show and have since dug deeper about it and it's absolutely fascinating. The Hurt Mind was a whole BBC series intended to educate the public about mental health. There is vanishingly little about it on the internet, it doesn't even seem to be on IMDb, and I have no idea of its preservation status. You can see the only episode available online here. It's about the then-current physical psychiatric treatments.

I was in two minds about blogging about it both because I'm bound to get on my high horse and because in that state I'm bound to start saying things people don't like. But then I thought fuck it. Besides this show strangely offers some helpful background to my current posts on The Prisoner so I will tag it in with them.

There's very little about this but there is this good summary:

The first factual television series to tackle mental health was the BBC’s The Hurt Mind (1957), listed in the Radio Times (28 December, 1956) as: “A series of five weekly programmes, made with the cooperation of the medical profession, on the problems and treatment of mental illness.” The objectives stated internally for the series were to reduce public fear, encourage those in need to seek help and increase public awareness and confidence in the latest scientific treatments. The first episode is unusual as it is predominantly pre-filmed at a psychiatric hospital, at a time when most television was broadcast live due to technical restraints and the cost of pre-recording on film. The ensuing episodes follow the more standard format of 1950s television - a live presenter-led studio set-up with some pre-recorded telecine inserts. These episodes included discussions and demonstrations involving mainly psychiatric professionals, with pre-filmed sequences depicting different physical treatments such as insulin coma therapy and the principles of lobotomy.

The series is an early example of British broadcasters working directly with charities and mental health professionals to develop series or seasons with a targeted public mental health education agenda, in fulfilment of the BBC’s public service remit. The anti-stigma message at the core of the series centred around comparing mental ill health to physical ill health and reassuring the public that mental illness was now very treatable. Thus, in the first episode ‘Put Away’ the presenter, Christopher Mayhew, a member of parliament, comments over footage of a young woman who is filmed at an out-patients unit:

Like most young and intelligent mental patients, this girl doesn’t mind us filming her at all. She knows that she can’t help her illness and it is nothing to be ashamed of, any more than any other illness.

In doing so, the series situated mental health conditions within a firm bio-medical paradigm, emphasising medical interventions such as pharmaceutical drugs and electric compulsive therapy (ECT), with the psychiatric profession presented as providing the authoritative voice on mental health. This reflected the continuation of mental health policy and practice that sought to align psychiatric treatment with general medicine, under the auspices of the recently formed National Health Service (NHS). Source

As a relic of 1950s TV this show is absolutely fascinating, not least because the first episode took place in an actual hospital but was recorded rather than being broadcast live, which of course was incredibly rare.

This episode begins without further ado with a nurse (who is of course described as a male nurse) describing how the new physical treatments meant they could open up the hospitals because they could now help people get better and get on with their lives.

Of course I am a former psychiatric nurse myself and have been reading around the history of the time recently but this is not quite telling the whole truth. I must be scrupulously fair and say that the whole truth is probably too nuanced for a short general programme intended to educate the public about psychiatric treatments (I have been unable to find out what ground was covered in the other episodes). What is omitted is the conflict between a more psychological approach to psychiatric medicine and the kind of physical treatments shown here. Obviously the physical treatments won that battle and the more psychological treatments took a bit of a back seat until a more recent resurgence. There is also no mention, naturally, that the whole question of opening hospitals up was a complete battlefield. But I see I'm talking about what isn't in the show instead of what's in it.

This show is utterly gripping viewing, totally bizarre, and totally sad at the same time.

It is very clearly expressed that the treatments depicted are intended to prevent suffering. The psychiatrist shown is Dr William Sargent who wrote a book all about these treatments. 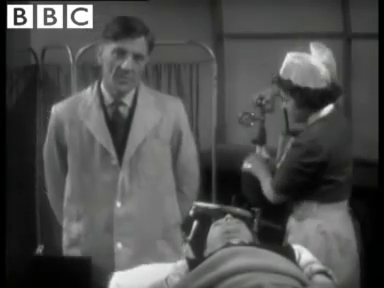 Two and a half minutes in you go straight into a simulation of what ECT looks like - they show ECT as 'modified' by anaesthesia and muscle relaxant, and as it is still given today. It's probably the most bizarre thing you could ever see, not least because the guy pretending to have it is an actual patient who has had ECT and is also interviewed. 'Watch his toes,' says the doctor. So they've explained to someone how to look as if he's having ECT, but not used an actor. It's utterly bizarre and utterly well intentioned, which just makes it weirder. Very much the same thing with the same intention was done by St George's in London but they had the wit to use real healthcare staff and an actor, which you can see here. Then the actual patient who has just pretended is interviewed and asked if he finds having real ECT unpleasant.

I suppose we can truthfully say that TV was different in the fifties.

And then we go straight into deep insulin coma therapy, and it turns utterly sad. In this case you see treatment actually being given in a hospital, and you see the procedure, the patients being put into a coma, and then woken up later to a large breakfast, and they all say how wonderful this is and how people get better with it.

What makes this sad will be familiar to any mental health professional reading this because it is the textbook example of a treatment which was thought to work but didn't. Literally this was being done internationally, you had loads of people see it work, there was loads of anecdotal evidence for it but it was useless. That's why people telling you medical treatment works is not evidence in the way a solid bank of double blind randomized controlled trials is (looking at you, homeopathy). It's the classic correlation and causation confusion going on here.

In fact there was some dispute about it at the time and ultimately deep insulin coma therapy was scientifically tested with comparison to barbiturate-induced coma and was found not to work. There is a full discussion of this here. With the benefit of hindsight it is devastating to see those poor people being subjected to dangerous and useless comas. This was done well within living memory (up to the sixties) and we tend to forget that medicine is only a couple of centuries old and modern psychiatry even newer. It is not actually conventional - what is conventional is the quack remedies the alternative crowd go for because they haven't learned the lesson that insulin coma can teach us. Quack remedies seem to work but don't, and without evidence based medicine we will go back to living to the grand old age of dying in childbirth, or of an ectopic pregnancy in certain states. I did say I would be on my soap box!

In the Prisoner post linked above I mentioned how strange it was to see actual ether abreaction and I can only repeat that. I think it should have been described not shown and honestly wonder what they were thinking.

There is also an interview with a man talking about his own lobotomy and how happy he is with it. This is again utterly bizarre and sad because when he described what he was like before his lobotomy he described himself as depressed although he went on to describe crippling health anxiety, convinced that he was going to have a heart attack. Nowadays he would have a mixture of antidepressants and cognitive behavioral therapy for this and while I believe a minuscule number of psychosurgery procedures continues (presumably if nothing else works) he now wouldn't even leave primary care.

He and his wife were both adamant that he was unchanged after the lobotomy, apart from the desired effect of not being depressed and worried about his heart, and I'm rather suspicious that the customers were very carefully picked to appear in this programme. I have met people a long time ago who had lobotomy at this time and anecdotally my impression has been that it rarely left your personality intact and made you too passive. Of course you would be happy with it if you were previously tortured! My impression is in general agreement with what I have read in the literature.

To be honest this is some of the most distressing TV I have ever seen - not least because I think too much is shown, but also I'm uncomfortable with the rather too reassuring tone. Look at these new (-ish, they were all twenty years old) treatments, they're absolutely wonderful, is very much the tone. I'm a bit surprised at this from the BBC and rather frustrated that I can't see the rest of the series to see what was said. I also wonder whether this is just me being a nurse and would welcome any impressions in the comments.

Ironically the only treatment still being given is the one with the most barbaric reputation, ECT. I'm not going to beat about the bush here - contrary to what you see on The Hurt Mind you do feel dizzy and headachey afterwards and do get some memory loss. So again the picture given in this show is more positive than I think is reality. On the other hand given that it is used for terrible depression and the horrible catatonic schizophrenia, it's a pity we never see people who benefit most from ECT, who aren't speaking or moving but sit up and start talking after one treatment, and nobody ever interviews the people who say they would be dead if they hadn't had ECT. I have had depression myself and would certainly consent to ECT if I could consent and needed it.

So I'm utterly wrung out by this TV programme which has been really distressing and sad in so many ways. It's been fascinating to see what was considered suitable to broadcast on the BBC in the fifties and I'm honestly shocked at how shocked I am.