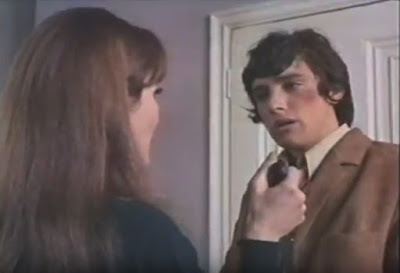 I am soon having a new laptop so I'm going through my hard drive - this is a show I've had saved for ages but not really watched. Since it seems it's Unethical Medical Experimentation season on the blog, I'm going to write about this episode. I'm afraid that I'm going to drive a bulldozer through it, so will repeat my policy that I never write about a show which is a complete dud here so I am certainly not advising against watching this show. Actually this episode was written by Antony Skene who wrote A, B and C, which I've just written about in my last post. This is pure coincidence.

Journey to the Unknown was an anthology series made by Hammer in conjunction with Fox. In common with other shows it was intended to be shown on both sides of the Atlantic and it was felt every episode had to have an American in the cast, in this case Stefanie Powers. I don't know what they were thinking because you know we do have a go at speaking English over here, I just don't believe the show would be unmarketable without a token American and being set in England it produces this impression of an England that's suddenly full of Americans for no apparent reason. It's very odd, when you think about it.

I have no idea of the show's reputation in the US because there is relatively little about it on the internet. It hasn't had a commercial release to my knowledge although the whole series is available online. In Britain it was never well served, being used as schedule filling late at night and seldom if ever getting a full showing, so it seems not well known. Add to that that it's about 'the unknown' in a broader sense than just, say, the supernatural, and it has further difficulty appealing to the public. For all of these reasons it's a slippery, indefinite sort of series.

So here I am to do a hatchet job on one episode. Oh I could tear my eyes out.

The premise is relatively simple: a woman (Powers) dies by suicide and is taken to the house of a doctor (Alan Macnaughtan) who brings her back to life with his experimental treatment, only to find that she's reverted to being pre-school age and has a tutor (David Buck) to re-educate her. So far so science fiction and essentially the rest of the episode is the subsequent events revealing how she got to the point of killing herself.

The main problem is there is all sorts of wrong. In fact there's so much wrong I'm going to have to deal with it in two parts.

Part one is the whole relationship thing, because lo and behold the tutor falls in love with his deceased and revived pupil and any professional boundaries go out of the window. This is bad enough, but let's not forget that the woman was dead, and let the full implications of that sink in. In fact I think this is why this episode gets thoroughly bashed in every review I've ever seen except I don't think anyone is sufficiently inappropriate to put it like I'm about to. The whole point of having Stefanie Powers in any show is to make it appeal to the heterosexual male population of the world and having her die right at the beginning rather puts a dampener on that. Because nobody wants to be ogling the star and wondering whether she's actually at body temperature. This is just all sorts of wrong.

Even apart from that the other wrong is there are credibility gaps in this show that you could drive a hearse through. In no particular order:

Amory, the teacher, takes her to Cambridge on an impulse without telling anyone. Sure enough she wanders off when he leaves her alone then has another go at killing herself. Honestly, you wouldn't let this woman out of your sight, and she has (strictly science fiction) medical needs which mean she needs frequent injections to keep her alive. That's right, just like diabetics, those sensible people who never go anywhere without insulin, and no health professional would fail to let people know she has to have her injection and can't be left alone. Jane lives in the doctor's house and apparently hasn't been traced. She's an American citizen and I don't think her disappearance would just go unnoticed. Nor does the doctor do anything sensible to trace her, and it's only after he kicks the teacher out that Amory thinks to look through her property to trace her. Honestly these people shouldn't be allowed out. The science fiction resuscitation serum would work better if the rest of the episode was more plausible - in reality she would be all over the news, in hospital and social services and the embassy would definitely be involved. When she disappears in Cambridge they bizarrely still don't ring the police. The serum is completely secret and the doctor is understating it when he describes what he has done as 'unorthodox' - more like assault and being struck off territory! Simply seeing her (presumably wedding) dress brings memories back for Jane, but oddly it seems nobody had thought to show it to her until she found it herself. Jane tries to kill herself again during the episode, and otherwise behaves in a quite desperate way - frankly literally any doctor of any specialty would at least give some thought to her being mentally ill or traumatized, but perhaps doing dodgy medicine makes you forget obvious stuff. Amory independently finds out about her past, just appears and just tries to confront her with her past - really it's more like they're trying to finish the poor woman off.

What this show has going for it is a great science fiction premise, some totally unethical medical experimentation and a twist which kicks like a mule.

There is another undercurrent to this in that Jane is treated spectacularly badly by pretty well everyone involved, which makes it even more uncomfortable. She is treated as a guinea pig and actually described as a 'diversion'. The whole show has a kidnap/deviant sexuality vibe to it which is really uncomfortable, so I suppose when I think about it the main thing it has going for it is the sense of discomfort it elicits.

If you can turn a blind eye to the remarkable plot holes and avoid fancying Powers because she's dead, you may enjoy the guilt, pity and other difficult emotions effectively brought up by this show.

60s TV Journey to the Unknown