The Prisoner in the Asylum: Once Upon a Time and The Schizoid Man 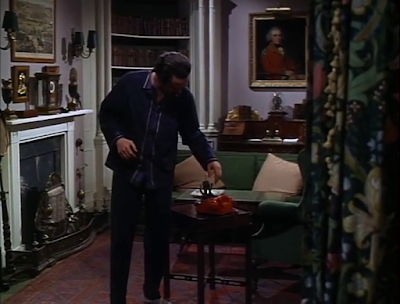 I have never watched The Prisoner in the production order before, and while obviously it screws up the order of episodes at the end, it has the advantage for my agenda of giving us this couple of cosy therapeutic episodes together at this point. I am going to deal with them together because, to be quite frank, I don't like them, always get up quite a lot of hope about them and end up feeling rather disappointed.

I am going to be even more frank and say that this is because they are both ridiculous. Once Upon a Time is bizarre and Schizoid Man falls flat on its face because it's impossible. We all have lookalikes, but not to that extent (although of course I do myself frequently get mistaken for Telly Savalas). Nonetheless I think they go well together because they both reference elements of psychotherapy and particularly the anti-psychiatry of the sixties. It will come as no surprise that these elements all have aspects about splitting the self and our relationships with other people.

Once Upon a Time references many aspects of traditional psychoanalysis, though, particularly going back to how the individual grew in childhood and to the relationships around him. There isn't a psychiatric or psychological equivalent of degree absolute that I am aware of - in fact it reminds me of nothing more than a decree absolute marking the end of a divorce, possibly the divorce of parts of the self or a fake aspect of the self from the real self. Largely it references traditional Freudian psychotherapy but there is also a suggestion of Kleinian projective identification. In this phenomenon you don't just project something onto someone in the way that we are all familiar with, but you actually identify the other person with aspects of yourself (again the divided self and relationships with others appears). This was described by Klein as a fantasy and you defend yourself by getting rid of bits of yourself into others and identifying them with the other person. It's almost like McGoohan was reading Klein.

This brings us nicely into the approach of the 1960s school known as anti-psychiatry. I have said before that I think it probable that Laing's book Divided Self was the direct influence here, but the rest of the anti-psychiatrists understood mental illness in the same existential way that he did. Laing used the word schizoid to refer to the self when it became split up within itself, or from outside. When you look at these two episodes with this in mind you can see the connection with Laingian therapy and I would defy anyone to read this paragraph and not to think of The Schizoid Man:

'Here [Laing's patient] Peter's ontological insecurity in his feeling that he 'was a pretence and a sham' can be seen. His 'schizoid nature,' which is visible in his construction of an unstable false-self system, was both an expression of this insecurity and an attempt to overcome it. Furthermore, the false-self system was an attempted defence against what he perceived to be dangers to his being. He felt that he was nothing, so he constructed a false-self system, which was not him, to act in the world instead of him. He felt that this protected his self because other people's attempts to make him nothing would only affect his false self. However, this splitting actually occasioned a deepening of the ontological insecurity, because the more his real self was replaced by his false self in the world, the less his real self existed. Laing is ascribing to Peter a kind of existential disease process which is the result of his disordered understanding of his self in the world.' Oisin Wall: The British Anti-Psychiatrists. Routledge, New York, 2018, p. 148.

How bizarrely familiar is this?! On the other hand I'm sure you can see why I'm not keen on Laing.

It feels a bit of a cheat but I am finding it strangely easy to see the events of the show as taking place in a rather unusual hospital about the therapy of a very unusual patient. I am honestly surprised at how easy this identification is and how much of the show gives up a psychiatric meaning when pressed. Therefore I can happily say it is obviously the case that Smith is undergoing a course of frankly rather fanciful and certainly innovative therapy, aimed at restoring his fractured self. It also feels like I'm being over-simplistic when I say that The Village is well-intentioned and wants to heal him of the mental state which Laing would have referred to as schizoid. This feels way too easy so of course I must add that it's entirely conceivable you could read these episodes as totally justifiably pulling the leg of sixties psychiatry, which was as you can see, rather proud of itself and pompous.

The Schizoid Man ramps up the sixties woo by introducing zener cards and treating ESP as if it's a solid scientifically proved thing. I think I can confidently say that when experiments are adequately controlled there has never been a result which has obtained a result above what you would expect from pure chance. These two episodes go so well together partly because of the sheer amount of sixties fads going on.

Again the therapy comes to the fore and although I think it could be explained in several different ways, the basic themes of Smith being divided, introduced to himself, comflict, therapy and resolution are all there happily making this far too easy for me to write about. In fact you could read the two Number 6s as being the ultimate in projective identification (their bickering with each other sounds quite different when understood in this light):

Projection is the unconscious act of attributing something inside ourselves to someone else. Usually, but not always, the "thing" we are projecting is an unwanted emotion or attribute. For instance, if John does not feel good about his own body image, he may see Mark and and think to himself, "Hmmm, it looks like Mark has put on a lot of weight." Now, if Mark has in fact put on a lot of weight, John would simply be observing reality accurately. If Mark has not gained weight, we could safely assume that John is projecting his own perceived unattractiveness onto Mark. John, by projecting onto Mark, is also distorting his own ability to perceive reality clearly.

Projection occurs inside one person's mind. In the above example, the projection is occurring inside John. Mark may be walking past John and not have a clue what is going on regarding John's perceptions of him.

"Projective Identification" becomes a two-person process. Let's use the above scenario, but this time let's have John and Mark interact. Let's say that John meets Mark, greets him, and then comments to him "You look like you've put on weight." Mark, quite understandably, may feel hurt, and/or angry, and/or embarrassed by this comment. The cause of Mark's uncomfortable feelings, however, should be scrutinized closely, because it is at this moment that we must decide if this pair are accurately perceiving reality or if they have entered into a shared delusional state. If Mark has indeed gained weight recently, his uncomfortable feelings in the wake of John's comments may simply reflect his own feelings about the state of his own body. If Mark has not gained weight recently, we might say that he has become identified with John's projection of uncomfortable feelings about body image. Thus, Mark comes away from the interaction feeling hurt, angry, and embarrassed, when he in fact has nothing to feel hurt, angry, or embarrassed about. He literally gets stuck "holding the bag" of uncomfortable feelings that do not even belong to him in the first place. Source

There is a deep undercurrent of weirdness though, and I think that is best explained by again seeing events through Smith's eyes and he really isn't very well. It isn't possible that The Village would have laid hands on someone quite so identical to Smith so I think we can truthfully say the events aren't happening quite as depicted. There are additional weirdnesses, which I think may be further indications that we are seeing through the eyes of Smith. Perhaps the most bizarre is Number 6 calling Smith 'Flapjack Charlie' while presenting him with a plate of pancakes. Even if they were the oatcakes made in Staffordshire which tend to be big and thin and look like pancakes, they would still not be flapjacks. The reference is clearly to the food shown on screen because Smith has already lifted the lids on various other foods. I would suggest that this and other scenes with Number 2 are seen through Smith's eyes and aren't real or are very distorted perceptions of reality. Further examples would be the scene where he electrocutes himself (even if you knew nothing about operant conditioning you would notice that it had already been done to him multiple times and surmise you don't change your behaviour, let alone dominant hand, with one shock), and the fight immediately afterwards. This is strange because he gives the correct password whereas elsewhere he gives the wrong one. And are we seriously supposed to believe Number 6 had access to nerve gas?!

It's almost as if it was the fevered imaginations of someone who really isn't very well! 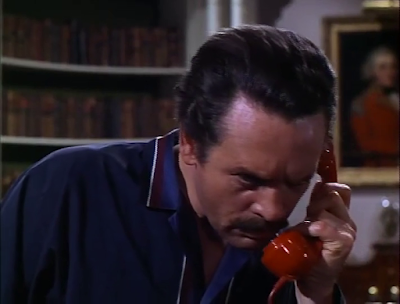 And lo and behold, what do we see in Number 12's flat but Steed's Library? I can feel a conspiracy theory coming on.
I would conclude that these two episodes taken together can be seen as a compendium of references to current psychological therapies of the day, with some woo and weird for good measure!