The Prisoner in the Asylum: It's Your Funeral Part 2 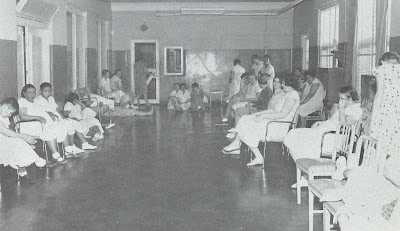 The introduction and master post to this series of posts about The Prisoner can be found here. Edited 30/5/22 to make the original post less unwieldy.

It may seem as if the rest of the episode is not related to psychiatry but I think the whole rest of the episode shows a number of institutional behaviours. We see everyone concerned dealing with The Village as best they can, and surviving as best they can. This may sound like normal adult life where we're all struggling, but I think what makes it more institutional is that I think we see the sort of behaviours we see when you are unable to leave an institution and they authorities can't get rid of you.

Nowadays we tend to forget how people weren't going anywhere in the old hospitals. The staff used to say that literally the only way people left was in a box and in that situation it creates a significantly different power balance to most modern healthcare. In addition to the abuse of patients by staff who had to be basically lion tamers with no resources or training and would have to do the same the next day for another thirteen hours, it had an effect on the patients. Imagine that you know you're not going anywhere, have no opportunities to change your life, and there also isn't any opportunity for the staff to do anything about this. I think the only way this would alter your behaviour would be negatively and you could start doing some quite antisocial things if you really didn't care enough. That was why everything was relentlessly hopeless in the asylums: to get you to the point where you can't even muster the strength to misbehave. Admittedly blowing up the boss is a bit extreme, but if your back is against the wall you do those sort of things.

There are relatively few people in institutions in this situation nowadays but I would like to just compare the behaviour of Charles Bronson, Britain's most violent prisoner, who has been in prison continually since 1988, where he was sentenced for planning a robbery. His current sentence is a life sentence because of his ongoing violence, hostage-taking, and other behaviours guaranteed to keep you in prison a good long time even if the original offence was minor. I'm bringing him up because the kind of institutional coping behaviour that keeps you there is exactly the sort of institutional coping behaviour that we see in this episode, in terms of blowing the place up. It is also the case that Smith, being their celebrity patient who they can't break and certainly can't discharge, is in exactly the position of Bronson, so gets the exact same institutional response in the series. Bronson has spent time in all three of the high security Special Hospitals set up by the 1959 Mental Health Act, although I'm not aware of him having an ongoing diagnosis.

It may seem a strange comparison, but if you haven't seen the film Bronson starring Tom Hardy, I would highly recommend it as a comparison of the same institutional behaviour. Including spending time in solitary - did I say seclusion, sorry, solitary? I have a feeling that's going to be on The Village's menu next.

As an example of the sort of happy, co-operative and harmonious relationships these sort of institutional situations create between the staff and the patients I have put a clip of Bronson having medication from the nurses in Rampton here  - I've put it on a separate page because it's got swearing, physical restraint and compulsory administration of medication and I wanted to give people the option of going there or not. It's just there as an example of the extremes of behaviour and dodgy power dynamics fostered by institutions at times.

Now you may be thinking that you would have to be off your head or at least very disturbed to behave in a way which would wreck the rest of your life, but obviously my entire point is that the Village is full of complex, dangerous people who might have very marked sociopathy, like Smith.