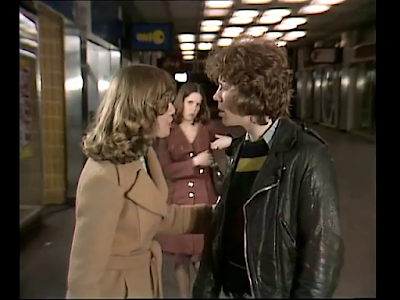 Another play, and again one I discovered as a result of my dives into the internet for orphaned episodes. In fact I think I have discovered another genre which TV might have given to the world. As Stephen Poliakoff, the author of this play, puts it when talking about all the TV plays of the time:

There's an elegiac note in Poliakoff's voice, because many, or most, of the plays are no more. "Nobody can now say how good they were because there's no book about them, and no archive. Some famous ones, like Cathy Come Home, are shown from time to time, but it's a tiny percentage of the mass. Several thousand one-hour plays have just been wiped, lots of others made on film may still exist but nobody's looked at them since they were transmitted. Considering all the media courses around, it's incredible that we shouldn't have this contribution. A good case could be made that the single-hour play could be the most important art form of the late 20th century." Source

Anyway we're right in the grit with this one and so perhaps I'd better give you a warning that this play is about incest and also mentions terrorist acts.

I am also going to come clean and admit that I am quite low brow really. My taste is much more for the rather unreal TV that I watch and I don't primarily have relevance or being challenged in mind when I watch programmes nor when I blog about them here. Actually another of his plays, Stronger than the Sun, featured here as an orphaned episode only two posts ago and I would highly recommend his 1987 conspiracy film Hidden City, despite the drumming it's had from critics. Pah, what do they know!

You can tell the change of tone from my usual viewing because I don't think I've ever had cause to comment before that we are moving on from the paedophilia and psychopathy of the last post to incest with even more psychopathy in this one. This is some intense TV and I'm out of my comfort zone! I think that rather than thinking of gritty drama as the connection here I might just as well declare these two posts Mental Health Week on the blog because that's the territory we're in.

To a mental health professional, we're very clearly back in personality disorder territory. This is a play about a man who witnesses the Birmingham pub bombings, goes to stay with his sister for a fairly uncontained night before they go home to her flat and have sex.

Now if you have seen this you will have been unable to miss the very obvious fact that the brother is a handful. He ignores boundaries, likes to shock, winds up the people around him and is generally the sort of person you want to get away from. The sister is mainly painted as the more sensible one (which she is, relatively speaking), but there's something wrong here.

In fact something very wrong. It is stated clearly that this is the first time the brother and sister, Clare and Ralph, have had sex and a clear connection is made with the stress of his witnessing a terrorist act and her relationship breaking up. Very stressful things, we can all agree, but wouldn't make you suddenly have sex with your sibling. It is also very plain that there has been an absence of boundaries for these siblings and the only place this enmeshed relationship and the utter train wreck of his emotions could have originated, is in their childhood. The play sets up the scenario with deadly accuracy by giving the characters the right background but then messes it up by involving two triggers which really weren't necessary. It would be much more convincing if Clare and Ralph were depicted as continuing an ongoing incestuous relationship, even if on and off. Because if you're going to try to tell me that these two could keep their hands off each other through their teen years, I will look at you like Dorothy looks at Rose.

This play naturally enough upset Mary Whitehouse (which I would argue is in itself a useful function) who kicked off and questions were asked in parliament about this play. The only other UK TV show I can think of which dealt with incest was Brookside, which had an ongoing story ark about its incestuous siblings, and if I remember rightly it was just as controversial. I suppose you could argue that if you never mention these things they are hidden and avoided but I have seen the Brookside story arc again in the past few years and it doesn't inspire the distaste in me which Hitting Town does.

I think there are a couple of reasons. In Brookside the incest is unexplained. It just happens and is all the more shocking for it. In Hitting Town it almost feels like other things like the bombings and Ralph's personality are recruited to try to explain it. But the whole thing is unconvincing (see above) and this is not an educational programme for social workers. It feels wrong that something so dangerous as incest should be dragged into an educational programme and then so mishandled. It doesn't help that the siblings come across as utterly unsympathetic during their evening out on the town. The result is it doesn't entertain and doesn't educate, it merely nauseates and if you've knocked about in the real world at all, won't even shock. This is hard hitting TV which is hard hitting for no apparent reason except to shock, but it fails in that and isn't big or clever.

The play moves between studio based interiors and very very seventies external scenes which largely take place in one of the shopping precincts of the time. One of the high points is the sound track which utilises many hum along seventies hits.

So my summary would be that this is a flawed work by one of the greats of twentieth century playwrighting. It's available all over the place.