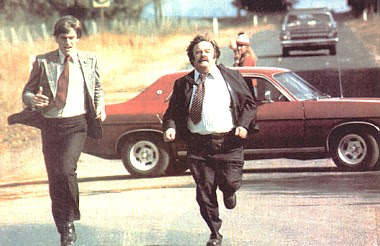 This is a show I came across recently and have gone out of my mind over.  The pilot is on the Internet Archive but I have treated myself to the boxed set as a late birthday present.

Bluey is a 1976 Australian TV series which as far as I can tell has a cult following in Australia but I'm not aware of it being widely known in the cult TV blogosphere. Perhaps I should just say that we are all familiar with lots of seventies police TV series from both sides of the Atlantic and this is not out of the same stable at all. This is special. I suspect the team were aiming for a police procedural set in an oddball detective team which would have been utterly ordinary. Luckily if that's what they were aiming for they missed their aim completely.

To cut to the chase it's about a police officer called 'Bluey' Hills who is really good at his job. He's so good at his job he's accumulated a telephone directory size file of disciplinaries and nobody else can cope with him in their department. The police have therefore been forced to create a new department just for him, and his new Detective Gary Dawson. Actually this doesn't adequately describe him. So far I've made him sound awkward, insolent and maverick, and that's not unusual in seventies detectives. So perhaps I should make it clear that he is genuinely really good at his job and I'm going to make a comparison so you know what I'm getting at. Picture it, Miami 1984, and try to imagine Sophia Petrillo as a detective:

We are talking about the exact same complete absence of filter and just saying it like it is. This is why I love Bluey - he's even more straightforward. I could totally have worked with him myself because of not taking shit or giving a single shit!

Put the Petrillo attitude in the unlikely large 242lb frame of the actor and comedian Lucky Grills (who took his stage name from the Italian-American gangster Lucky Luciano), and we've left The Sweeney and The Professionals so far behind I'm having difficulty seeing them in the rear view mirror. People keep wondering how he just keeps going, but it must be the beer and the fags.

This of course isn't a recipe for getting on in the world, even forty years ago, but strangely appears to be a recipe for good policing of a certain sort. He knows his patch intimately, knows who's who and uses his communication skills to great effect. This episode is about a police officer who has died as the result of a car bomb, and Bluey's investigation of the murder. There is a very touching scene where he goes to see the deceased's father, who is also a recently retired police officer. I have to admire the finesse with which Bluey asks the dad if he was involved in anything he shouldn't have been. Otherwise the plot itself is a fairly straightforward police investigation, the magic is in the way it's done.

Some of the highlights of Bluey's policing are ceasing interrogating a murder suspect because his wife has given birth and not charging him for assaulting Bluey because it would be too much paperwork. Incidentally I love the way he drags in a detective off the street who is a plant.

Of course you know that I'm going to say that one of the attractions is the authentic seventies setting. This of course also means there are some quite unreconstructed attitudes on show, but you were expecting that. I'm honestly trying as hard as I can to think of a sensible criticism of this show but don't have one.

There is a very good amount of detail about the show here. The box set is available in Australia from Crawford, distributed by Eaton films (who take Paypal) in the UK and it looks like you're dependent on it coming up on eBay if you're anywhere else in the world. Incidentally the box says the discs are all region, but surely my readership would all have the means to play region 4 DVDs. If you want more of Bluey it was parodied by the 1990s show The Late Show in the form of a gag dub called Bargearse. This caricatures the extremes of Bluey even more, if that were possible.