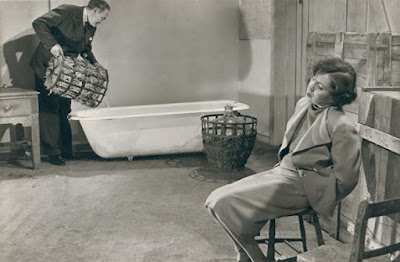 The introduction to this series of posts can be found here.
Another post about an orphaned episode and another emotional flip for me - this time to the feeling you get half way through a three year degree. You've started it for perfectly good reasons are in danger of getting tired of it and would jack it in if you had a career to go to. I won't comment more at this point because I have a longer post planned for when these are over, including about how it's been such a wild ride emotionally.
A trip back to the fifties today, when Britain was a bastion of moral uprightness and integrity. We were a beacon of hope to the entire world. If you ignore our empire, slavery, rape, pillage and frequent genocide that is. Honestly, you look at Boris and I don't know why anyone's surprised. I might be feeling rather negative. Anyway, I did have a point which was to say that 1950s TV really does take us into an alien world, with alien conventions. There is the imaginary Famous Five Britain, obviously. But Inspector Morley also takes us back to a more melodramatic age in entertainment.
It is also the oldest actual made for TV show I have written about here. I was wondering why when I searched for it I found a lot of stuff about films, and here's why:

Made in 1952 in the UK, this TV series could find no network so some episodes were turned into B-movies (Murder at the Grange, King of the Underworld and Murder at Scotland Yard) and the B-movies are repeated on channels like Talking Pictures and BBC2. Finding the original episodes is a far harder task and it’s great to find an example of the series.

It is wild to be writing about a TV show made seventy years ago which was never broadcast on TV until it was rediscovered after being missing presumed wiped.
To be brutally honest I am not surprised this made a film. It feels like a film. It looks like a film. I don't know how representative of early fifties TV that was, but it is noticeably different from the other fifties TV I have seen. Another reason is how melodramatic it is. I mean, seriously, it's got Tod Slaughter in it so we're already in melodramatic territory. His scenes are notable for feeling like the scenes in silent films where the baddie overdoes the acting. He contrasts to everyone else in fact! Please don't get thinking that this is a criticism, it's incredibly sweet and makes this so perfect. In fact if people threw their arms around dramatically more often, it may help!
Of course you're guaranteed melodrama with a name like Slaughter, and I love it. I am delighted to discover that when appearing in Sweeney Todd, Slaughter would go to the bar in the interval still wearing his bloody apron, not speak to anyone, order a drink and just sit in the corner looking creepily at people. What a legend!
Other ways in which this is old fashioned include naturally everything. I particularly like a bit where children are playing in the street. The lady involved in this is approaching Inspector Morley because she has been indiscreet and is being blackmailed with her letters stolen by a new servant. She doesn't want publicity because her husband is in the new year's honours list. How things have changed!
Try as I might I haven't been able to find out why Inspector Morley left Scotland Yard, kept the title as if he'd come out of the RAF and set up as a private investigator. This is 2022 and I need to know! I may well find out with watching the other available episodes. Of course if this had been made in the seventies he would be an alcoholic divorcee and we would know all about it.
The shows are in quite poor shape as far as I can see, but worth watching purely for the period charm and Tod Slaughter.
Another appeal
I was hoping not to do this again but these are not normal times and the government hadn't tried to hang on after being convicted of turning Downing Street into the scene of thirty crimes then. For the love of God, if you can vote in the UK, get out there on the 5th of May and vote. What I am appealing to you to do is vote tactically. Yes this isn't a general election and won't change the government but if you have had enough of Tory corruption give them a humiliating loss by voting for the next most popular party in your constituency. Do not waste your vote voting for minority parties, it won't do it. If the next most popular is Labour, vote Labour, and so on. Yes, I don't really want a Labour government but I'd rather have them than this crowd, doing this will not change the government but will give them a good kicking.
Update: since writing this I have found that several episodes of this show, including this one are available on commercial DVD so aren't actually orphaned. Still, I've enjoyed watching it and finding out about it. So there.
If you would like to support me and this blog you can buy me a coffee (or a box set) here.
50s TV Orphaned Episodes