Orphaned Episodes: The News Benders (Thirty Minute Theatre) with Reference to TV Predicting the Future and Bart to the Future 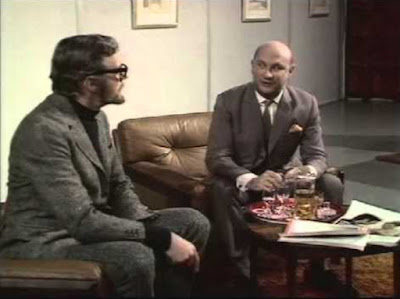 Another TV series which manages to get the word theatre into the title and is an anthology series of plays. Last week Mitchell Hadley made some kind remarks (thank you!) concerning the thoughts I had that TV hasn't come up with many new things which weren't derived from other media, such as theatre. Since then I have thought of another thing initiated by TV, the infomercial, but events have moved my thoughts on to how television doesn't just reflect society but apparently predicts what is happening. There are probably people who think The X-Files predicted the future, but then the only reason 1984 has come to pass is governments are using it as a manual. Unusually for me I will base this post around an orphaned episode but mention a couple of other shows as well.

The classic example of a British TV show which anecdotally had an uncanny talent for prophecy, was of course Doomwatch, and the linked article identifies these things which happened in reality after appearing on the show: genetic editing going wrong, sick building syndrome, antibiotics in the food chain, surveillance state, computer control, pest control contagion, huge rats and lead in petrol. I don't watch much US TV but from my limited experience a show which has a habit of predicting the future is The Simpsons and I would have to say those examples are more specific and convincing.

For the orphaned episode here, we have The News Benders, a surviving 1968 episode of the series. Perhaps I should just mention that it belongs to the BBC Series Thirty Minute Theatre, not the ITV series of the same name from 1961, which changed its name to Half Hour Story after the BBC show started. Honestly at the time we only had three channels which didn't even broadcast 24/7, how does it manage to be so complicated!

I can't better the excellent plot summary here, so won't try. But for the purposes of this post, suffice to say that it involves a journalist turning up for a job interview only to find he is being surveilled, the news is being fabricated using sets and models, and there is no escape.

Once again this is some quality television and I notice everyone comments on the stellar talent that worked on this series before it was just thrown away. The play is essentially two actors (excellent ones) in a small set, but gosh it's gripping. Seriously this is another orphaned episode to make you think what on earth anyone was thinking of to wipe most of the series. This unassuming half hour show takes hold of you.

I'm not going to criticise it. If you don't take to the description of it, you won't like it but it is such good quality drama, produced in a fairly standard way for the TV of the time.

Note this play was broadcast in 1968.

One year before man allegedly landed on the moon.

The salary he was offered was staggering.

This is gold! Thank you for uploading. I will have to share and pray the sheep wakeup swiftly.

And so it goes on. This whole thing fascinated me because of the role that TV has played since The News Benders was made, in people believing conspiracy theories, largely through a station which calls everything else fake news. Its viewers notoriously think real news is fake, but there is hope: apparently people's critical ability rises quickly even after a few hours of switching to CNN.

I am far from convinced that television by itself causes a drop in critical ability. I'm going to put this out there but if you have normal intelligence and are reading a newspaper with a banner headline reading Adolf Hitler Groped My Boobs you are not being deceived, you are choosing to read rubbish (anyway he's alive and living downstairs).

But The News Benders is an example of something which was fiction and has never happened. What about things which have happened and apparently been predicted by TV? Well I think it's confusing causation and correlation (and this common confusion is on the rise), and don't see any evidence these shows predicted these things. There are better explanations. Doomwatch, for example, kept a very close eye on current scientific developments in writing its scripts, and that is the best explanation for things apparently coming true. The show didn't cause them, they were already being knocked about in the academic community without the public knowing, and when they became public knowledge, it looked like they'd just happened. The public don't realize that new discoveries are usually years in development.

The Simpsons has been broadcasting since 1988 and is on its 33rd series. From the start the brightest and best of talent have worked on it so it's not surprising things it has talked about have subsequently happened  because again they have access to academia and the intelligence to imagine things. Plus if you spend 30+ years imagining and commenting on society you will always have a few things come true. Again it's all about the perception. An example would be the season 11 episode Bart to the Future which didn't predict Donald Trump becoming president. It didn't predict it because the production team just used Trump as a personification of rock bottom and had no idea he could be president. He was running for president at the time so was a possible but apparently even Trump didn't think he would get elected. A good example of how the Simpsons influences opinion but is misunderstood would be that people think nuclear waste is strange green glowing globules. It isn't. You can see pictures of it online. Fiction has created reality for people who haven't seen real nuclear waste and don't check.

It's probably slightly out of the remit of this blog but the internet has changed the landscape of information forever and has the exact same complex dialogue about human knowledge. There is loads of twaddle on the internet, put there by humans and other humans read it and may or may not stop to wonder whether it's twaddle and then act on it and spread it. In the TV I write about here the fear of technology keeps coming up but I really don't think we need to be frightened of technology but of humans and I think the misinformation, disinformation and misinterpretation I talk about in this post are prime examples of why.

A final reason TV can appear to predict the future is simply the way it reflects humanity and our behaviour doesn't really change.

For example here is President Simpson deceiving the American public over a tax hike:

And here is Greg Hands, our Energy Minister, talking about the money which will be cut from the energy bills of every household in the country. And will then be added back on down the line in the bills of the household regardless of who owns it by then. Only a Tory could have thought of that.
It's absolutely uncanny and horrifying. But utterly unrelated.

So TV has a complex relationship with society and this can be misunderstood because humans like things to be tidy. However this orphaned episode is pure fiction. I know for a fact the government aren't constructing elaborate sets to create the news because they're Tories and would rather spend the money in contracts for their friends..

Note: as you all know I like to set the tone on this blog. Not wearing a shirt is fine, but expecting me to publish conspiracy theories or dangerous antivax comments is not.