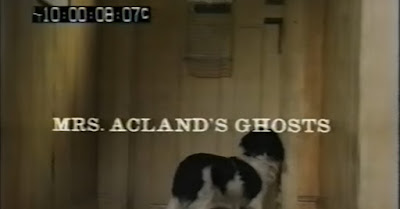 I was expecting to say that this series of posts was drawing to a close but I fell down an internet rabbit hole and as a result have another ten possible orphaned episodes on my hard drive! Like most featured here, they are episodes from a series of plays, as is today's. I don't think for an instant the episodes I'm finding are at all representative of contemporary television. I suspect the orphans which have found their way online are disproportionately middle class. BBC2 Playhouse ran for a whole decade from 1973 to 1983 and while I have failed to find out how much of it is wiped, some is certain to be. Conversely, while it meets my definition of orphaned episodes because the whole thing isn't available, I think some of its episodes have had commercial releases. This may not even be the first episode of this series I've included here, because The Mind Beyond is either a subsection of this show or a spin off from it, depending on where you look.

Mrs Acland's Ghosts does a good job of taking up your emotions and giving them a good shake. It's about a tailor who out of the blue gets a letter from a woman in a psychiatric hospital. She tells him all about her self and life, and he gets so involved he eventually goes to visit. Unfortunately he finds out that what she's told him isn't true and the reality is fairly heart wrenching.

It's a clever, compelling and atmospheric play.

It also has one big problem which only applies to one kind of viewer and so I would suggest you avoid this if you are a mental health professional. It will annoy the hell out of you. What this play gets totally wrong is that if a visitor turns up at a psychiatric hospital and tells the doctor how they firmly believe some of the wilder delusions of one of the more unwell patients, in reality what happens is the psychiatrist's eyes light up and they begin thinking of the monograph they will publish and how this will make their career. What the writer obviously didn't know when he referred to what the tailor experiences as ghosts is that it sounds absolutely wild, but folie à deux is a very rare condition where only one person is ill but people around them believe their delusions as well. In a varied career as a nurse in a busy city hospital I only came across this once and the most bizarre thing about it is not even the way the other people genuinely believe the delusions but the way they all stop believing them when you treat the one who's ill!

I found it fascinating how the tailor got drawn in, rather than just ringing up the hospital to say one of your patients really needs a friend.

Otherwise the building up of Mrs Acland's world is fascinating and the doctor's explanation of what brought her to that point is heart rending.

Anyway, not a bad play by any means, but unfortunately it's describing a condition that the doctor would not have missed for a moment and the writer was presumably not aware of. And I'm also very aware of how curmudgeonly this sounds.

A film which does depict psychosis very well is Shutter Island in which Leonardo DiCaprio and Mark Ruffalo play US marshals investigating a missing patient at a very peculiar psychiatric hospital. On one level it's a film you can only watch once, because after that you know why the staff are behaving so oddly. However beyond the bare plot it has a wealth of details which repay repeat viewing. I personally think that it depicts thought disorder in a tendency to jump from subject to subject a bit and the way scenes chop and change. I haven't seen this mentioned in any of the literature though.